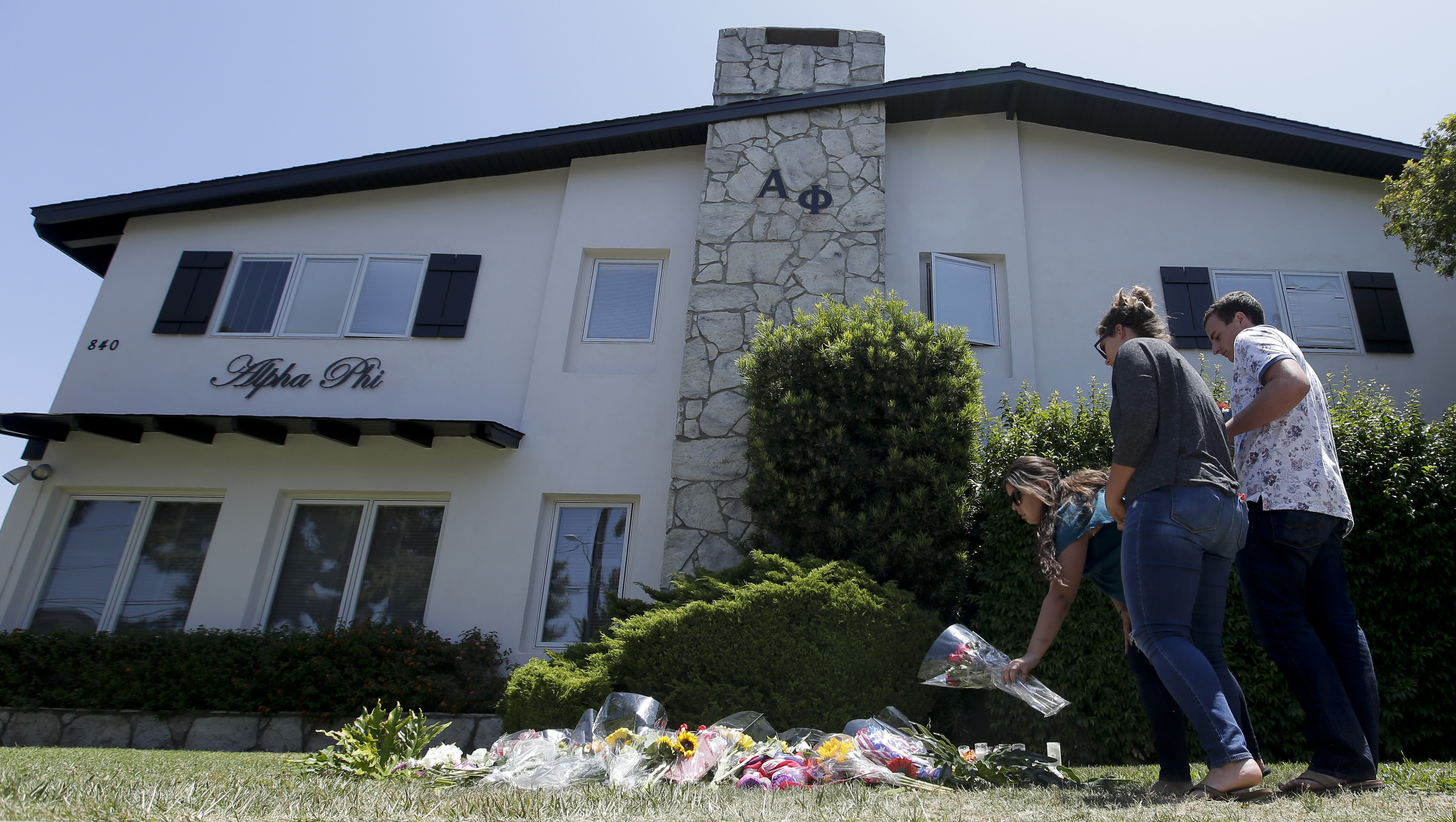 GOLETA, Calif. - Elliot Rodger pounded on the sorority house front door while, inside, the young women he yearned to slaughter were preparing for another Friday night, authorities said.

The awkward 22-year-old was obsessed with exacting "retribution" for what he experienced as a lifetime of social and sexual isolation, and had planned meticulously to target as many people as possible, according to a manifesto he left behind and a YouTube video since removed. But here again, he was denied access to those he felt should worship him.

So when no one answered after several minutes, Rodger improvised.

Walking around the corner, he found a group of students and opened fire, then took off in his black BMW through the streets of a college beach town buzzing with end-of-school-year energy. Within 10 minutes, the rampage was over and Rodger was dead, apparently after shooting himself.

As authorities reconstructed the events, they would conclude that Rodger had fatally stabbed three victims in his apartment, shot and killed three others at random, and injured 13 more either with gunshots or a car that he used as a battering ram against bicyclists and skateboarders.

The mayhem unfolded within just one square mile near the University of California, Santa Barbara campus, but included several crime scenes.

As the rampage was taking place, Rodger's parents were racing to try to get to him.

A family spokesman told the Los Angeles Times that Rodger's mother, Chin Rodger, received a call from the young man's therapist at 9:17 p.m. Friday -- 13 minutes before authorities say the gunman opened fire outside the sorority house.

Chin Rodger called her ex-husband, Hollywood director Peter Rodger, and the two parents set out for the college town where their son lived. They were driving when they heard reports on the radio of a shooting in the Isla Vista neighborhood, Astaire said.

The killings began with the stabbings in the apartment that Rodger rented, inside a two-story courtyard building fronted by palm trees.

After the stabbing spree in his home, police say, Rodger drove five blocks to the Alpha Phi sorority house.

In rambling writings he titled "My Twisted World," Rodger detailed his plan to kill his roommates and then invade the sorority, which he concluded symbolized the world that tortured him - beautiful women who would have spurned him in favor of the "obnoxious slobs" whom he also despised.

"I will sneak into their house at around 9:00 p.m. on the Day of Retribution, just before all the partying starts, and slaughter every single one of them," Rodger wrote. He knew the stucco house, with its neatly trimmed lawn and hedges, well: "I've sat outside it in my car to stalk them many times."

The double front door is heavy wood, with glass etchings of the sorority's shield and an electronic keypad to get in. Several women heard Rodger's "aggressive knocking," Santa Barbara County Sheriff Bill Brown said. "Fortunately, no one opened."

It was 9:27 p.m., and Rodger had left the door and within 20 paces encountered a group that included Veronika Weiss and Katherine Cooper. He shot and killed the two UCSB students, and wounded a third.

All three were from the Delta Delta Delta sorority. The outgoing Cooper was preparing to graduate with a degree in art history; Weiss was a first-year student who had played water polo in high school.

Bailey Maples was nearby, holding hands with her boyfriend: "I felt the bullet graze me and I didn't, like, bleed or anything. And then I looked at my boyfriend after we reunited and he had been wounded and covered in blood."

"Yes, I looked into his eyes," Maples said.

Two blocks and three minutes later, Rodger was at a local deli. There, he got out of his car, went inside and shot and killed Christopher Ross Michaels-Martinez, also a UCSB student. Friends described him as the kind of person who would welcome strangers into his home. He planned to study abroad and then go to law school.

At least four other customers were inside, and surveillance video shows them scrambling for cover while a bullet hits the glass of a refrigerator door.

Sheriff's deputies responded to the scene and saw Rodger's BMW leaving, but did not know the shooter was at the wheel.

Soon after, Rodger was driving on the left side of another road so that he could be close to the sidewalk as he fired at two pedestrians. And then, more shots - this time between Rodger and the first sheriff's deputy to engage with him.

Meanwhile, Ryan Ellis was wrapping up his Friday night service at Isla Vista Church, a makeshift house of worship inside a beach home on a street filled with students - and on Friday night, parties.

A few dozen young adults were getting ready for hamburgers when shots rang out. Fireworks, someone said.

"I knew right away it was gunshots," said Ellis, who said he had been a Navy combat engineer in Afghanistan.

He ran out to the street and saw a cyclist lying on the ground, but no car around. "He was pretty messed up, lying up against a vehicle," said Ellis.

The cyclist, who was not identified, was one of two whom Rodger intentionally smashed with his car.

By now, officers were yelling at people to go inside and friends were texting friends not to go out.

Speeding on, Rodger accelerated and hit another cyclist, who was thrown onto the hood with a force that crumpled the windshield. Rodger's car then careened into several parked vehicles. It was there, in the car, that he apparently shot himself.

"The police dragged a body out of the car," said UC Santa Barbara senior Kyley Scarlet, who was in a house next to where the car came to a halt. "It was him."

1 - The rampage began with the stabbing deaths of three people at the residence of Elliot Rodger.

2 - Residents at the Alpha Phi Sorority house heard loud aggressive knocking for 1-2 minutes but no one opened the door. A witness from inside the house saw three women outside who were shot from across the street. Two of the women Katie Cooper, 22, and Veronika Weiss, 19, were fatally shot. The third woman was shot multiple times but she survived.

3 - At a nearby deli on Pardall Road the suspect exited the vehicle and fatally shot 20-year-old Christopher Martinez. Four foot patrol officers saw the suspect flee in the black BMW.

4 - At the top of the area called "the loop", the suspect fired rounds at 2 people on the sidewalk.

7 - At the intersection of Camino del Sur and Sabado Tarde, the suspect fired multiple times at pedestrians, three of whom were hit.

8 - The suspect continued east on Sabado Tarde and shot another victim.

9 - He continued east where he came into contact with 4 officers and he began firing at them. Three of the officers were able to return fire. The suspect was shot in the hip.

10 - He turned onto el Embarcadero again, accelerated and struck another bicyclist. The cyclist flew onto the car and smashed the windshield of the BMW. The car collided with park cars and stopped. The deputies pulled him out of the car and handcuffed him. He was dead with a gunshot wound to the head.