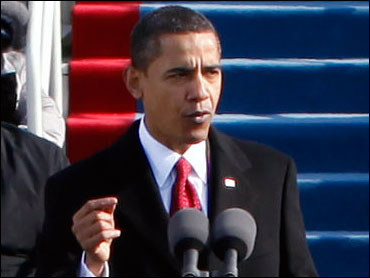 (AP/Ron Edmonds)
It's Barack Obama's 50th day on the job, so how come the economy's not fixed yet?

Unfair question? Sure. But it's also the inevitable question that he tries to answer at every opportunity.

"From the day I took office, I knew that solving this crisis would not be easy, nor would it happen overnight," said the president over the weekend in his weekly radio and Internet address.

Of course, nobody expected the crisis to be turned around "overnight," but what he's really telling us is "no time soon."

"We will continue to face difficult days in the months ahead," he cautioned.

Nevertheless, he remains confident and optimistic that the actions he's taking and policies he's implementing will ease the crisis and return the economy to growth.

"I also believe that we will get through this -- that if we act swiftly and boldly and responsibly, the United States of America will emerge stronger and more prosperous than it was before."

The economic quagmire has dominated his first fifty days in office, but a CBS News log of his daily activities shows he was determined to score points on other issues as well.

Here are some key dates: (with links to summaries and video from each day that appear in Hotsheet)

- Meets with business leaders on the economy

Friday, January 30, 2009 – Speaks to labor Leaders about the economy

- Meets with Democratic Congressional Leaders about the stimulus bill

Friday, February 6 - Announces members of his Economic Recovery Advisory Board; laments jump in unemployment rate to 7.6%

Saturday, February 7 – Makes his first visit to Camp David with his family

- Sits for interview with ABC's Nightline

Wednesday, February 11 – Makes case for the stimulus bill on visit to a construction site in Springfield, Va.

- Visits the Caterpillar plant in East Peoria, Il., to deliver another speech about the economy and the stimulus plan.

Friday, February 13 - House approves latest version of the stimulus bill, but not one republican votes for it

Monday, February 23 - Addresses governors about the economy and the stimulus plan

Thursday, February 26 - Unveils his federal budget plan and its $1.7-trillion deficit this year

Tuesday, March 3 - Visits the Transportation Department to spotlight highway and transit projects in the stimulus bill

Other mile markets of the first 50 days:

But in an interview Friday with the New York Times, Mr. Obama said he knew in advance there were "going to be a lot of unexpected twists and turns" in his presidency and in the nation.

"This is still a human enterprise and these are big, tough, complicated problems," he said.

Further, he said he knows that if a problem makes all the way to the president's desk, it means it's hard to solve.

"So typically, if something's in my folder, it means that you've got some very big, difficult, sticky, contradictory issues to be wrestled with," he told the Times.

No complaints please, Mr. Obama. It's the job you begged us for. We'll check back at Day 100.

Complete Coverage: Obama At 50 Days
Also, make your predictions about Mr. Obama's approval rating after 100 days and after 1 year.