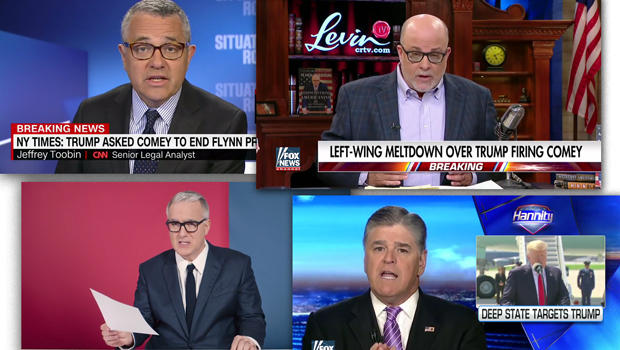 THE GREAT DIVIDE in America's political life is a topic we have explored before, and if current events are any indication, it is a topic we'll be returning to again ... and again. Our Cover Story is reported by our Senior Contributor Ted Koppel:

A couple of months back, Stephen Colbert was checking out the makeup of his studio audience:

It was actually kind of a sweet moment; because the Ed Sullivan Theater in the heart of Manhattan is definitely not Trump Country; and this single Trump supporter was being treated like some sort of endangered species.

Colbert:  "Don't we love this guy? Thank you for your service!"

It was a rare, tiny moment of tolerance in what has become an increasingly intolerant media landscape.

In the immediate wake of last week's shooting in Alexandria, Va., in which Republican Congressman Steve Scalise was critically injured, there was a brief surge of "hands across the aisle."

"An attack on one of us is an attack on all of us," said House Speaker Paul Ryan.

"To my colleagues, you'll hear me say something you've never heard me say before: I identify myself with the remarks of the Speaker," said Minority Leader Nancy Pelosi.

But the shooter's immediate identification as a Trump hater stoked passions on the right … and the far-right.

Geraldo Rivera called it "attempted partisan mass-murder."  Alex Jones, of the website InfoWars, called it "a terror attack coordinated not by ISIS but by CNN, MSNBC, [and] the Democratic Party."

Meanwhile, the rest of the media spectrum discovered new fuel for charges that the president has engaged in obstruction of justice

If what you're hearing and reading and watching runs the gamut of what's referred to these days as the "mainstream media" -- center-right to partisan left -- then professor Yochai Benkler, at Harvard's Berkman Klein Center for Internet and Society, has concluded that all of you are consuming pretty much the same material.

He recently completed a study of coverage of the Trump-Russia story throughout May 2017. "If you look and compare the words that are typical of places like the Wall Street Journal or Fortune or what we would normally think of as center-right; sites that are the three networks, the Times, the Post; all the way to Huffington Post and Daily Kos and things that are more partisan left -- they all used very similar words.

"They all focus on Trump and Russia in very similar terms of what the complication is: Does it raise a question of impeachment?  Doesn't it?  Is it enough for obstruction or not?"

Benkler says media outlets on the right are offering much less coverage of possible obstruction of justice. In addition, "you see a completely different version of this; it is about a 'deep state' effort to bring down Trump."

Or, as Sean Hannity referred to it, "the deep-state Obama hold-over bureaucrats who are hell-bent on destroying this president -- President Trump."

Let's state the obvious: The Republicans control the Senate. The Republicans control the House.  Donald Trump has been our President just five months. Talk of impeachment is probably premature, and certainly plays right into the hands of the president's most ardent supporters, like Rush Limbaugh, who said: "I marvel at the ability to drive these people crazy. They think they're driving Trump crazy, and they may be. But I'm telling you, they're losing it, too. They're literally out of their minds now!"

Pat Buchanan, whose new book, "Nixon's White House Wars," draws on his own experiences as an advisor to President Nixon, told Koppel, "The battle between Donald Trump and the media, which is very volatile and it's back-and-forth, it's every day, that really began in earnest in November of 1969, when Nixon, after he gave his famous, 'Great Silent Majority' speech, was attacked by the networks immediately."

Buchanan was the author of what would become a highly-controversial speech, from November 1969, that he wrote for Vice President Spiro Agnew, hitting back at the TV networks:

"My friends, we'd never trust such power as I've described over public opinion in the hands of an elected government. It's time we questioned it in the hands of a small and unelected elite."

Sound familiar? It was a first draft of what 47 years later would become a full-throated attack on "fake media."

When Buchanan ran for president himself, in 1992 and 1996, he crafted several campaign themes that Donald Trump adopted almost word-for-word:

Buchanan: "Friends, there is nothing wrong with putting America first."
Trump: "'America first' will be the major and overriding theme of my administration."
Buchanan: "Each year millions of illegal immigrants cross our Southern borders into the United States. Most come without job skills. Crime explodes."
Trump: "They're bringing drugs, they're bringing crime, they're rapists."
Buchanan: "If I can get a victory in California, you'll see this fence all the way across the Gulf exactly where I want it."
Trump: "I would build a great wall -- and nobody builds walls better than me, believe me."

Then and now, these were themes designed to peel white, working-class Americans away from the Democratic Party.

Only the divisions now, says Buchanan, are far deeper than they were 20 years ago:

"And so everyone turns, basically, to create their own newspaper, and their own network, and that's what they read," Buchanan told Koppel. "But the core of it, Ted, is that the country's divided as it's never been before in my lifetime."

At both ends of the political spectrum, there is a whiff of self-righteous high drama. In online videos, commentator Keith Olbermann refers to President Trump as "our national embarrassment, our international disgrace," while Mark Levin accuses the media of hating America, saying, "They're every bit as evil as Donald Trump says."

A network, says Professor Benkler, largely inspired by Breitbart.com, until a few years ago an obscure, right-wing website which, under the leadership of Steve Bannon, accumulated enormous national political influence.

"Breitbart, connected to Fox News, amplifying AM radio, creates an alternative narrative," said Benkler. "So they'll have a series of stories basically saying, 'Deep state leaks for the first time,' this, that or the other. This will then be linked to other websites, like Daily Caller. It will be amped up on conspiracy sites like InfoWars.  It will be generated on TV on Fox News.

"And all of this network of propaganda sites is directly then tied to someone who's sitting inside the White House."

Koppel said, "And if I tell those folks who believe all the things you've just enumerated, 'There is this study conducted by a professor at Harvard University, now he's an honest academician ...' you think they're gonna pay the slightest bit of attention to your study?"

Koppel asked Buchanan, who watched Richard Nixon resign before he could be impeached, whether he thinks President Trump will be impeached.

"You know, I do not think … no, I do not know how we can sustain this level of intensity and hostility that we've had for four-and-a-half months for 44 more months," he replied. "I don't know how it's going to end. But my guess is badly."

Speaking with Buchanan before last Wednesday's shooting in Alexandria, Va., Koppel raised the issue of possible violence in the context of an impeachment.

"Would it come to violence?  I don't know.  I wouldn't predict that," Buchanan replied. "But I do think that this country would be even further and irrevocably divided over this issue.  And they would not forget it for a long, long time. Because they would believe what, Ted? They would believe that the establishment was out to get Trump from the first day, and it wanted to take him down. And I think they would be right."

Which brings us back to where we began: Stephen Colbert, sitting atop the late-night ratings these days by being consistently, and often outrageously, anti-Trump.

Colbert: "Donald Trump, if you're watching, first of all, you're a bad president. Please resign. (Cheers)"

Alicia Garza on the origin of Black Lives Matter