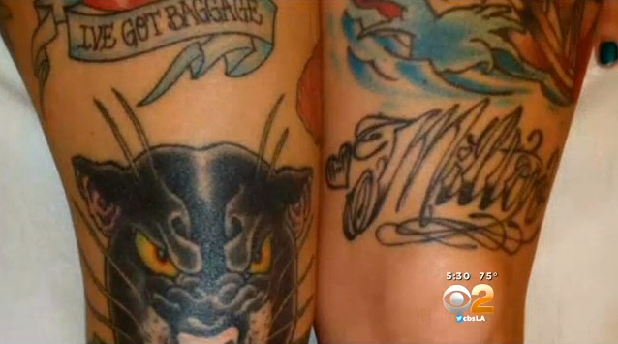 ORANGE, Calif. -- A woman with cancer had a major scare after ink from her tattoos caused an imaging test to light up, leading her doctor to believe the disease had spread.

Dr. Ramez Eskander, an Orange County surgeon, told CBS Los Angeles that ink from his patient's tattoos, which covered her legs and thighs, had lit up her lymph nodes on a body-image test called a PET scan.

The images led doctors to believe her cervical cancer had spread to her lymph nodes.

But once in the operating room, doctors learned it was tattoo ink causing the bright spots on her scan -- not cancer cells.

"When you tattoo, some of that ink will be absorbed in the cells in the lymphatic system and migrate to levels of lymph nodes," he said.

Eskander published his findings this week in the Journal of Obstetrics & Gynecology. He says the patient's case should serve as a warning to people with body art and their doctors.

"What we wanted to do is educate physicians, patients, families," he said. "When there is a PET scan that shows a bright lymph node, if a patient has significant tattoos or body art, than you have to be cognizant that these might be false positives."

In this woman's case, she still received a hysterectomy because she did have cervical cancer. However, because it had not spread as originally thought, she did not need to undergo radiation, which can have lifelong side effects.

"She was thrilled to share her story with everyone, but she never indicated she regretted the tattoos," Eskander said.

Eskander hopes his study creates a conversation about early detection and prevention, and says the human papillomavirus (HPV) vaccine and exams are the key to that for cervical cancer.

Researchers were not able to determine exactly how much tattoo ink is needed to cause a misdiagnosis from a scan.