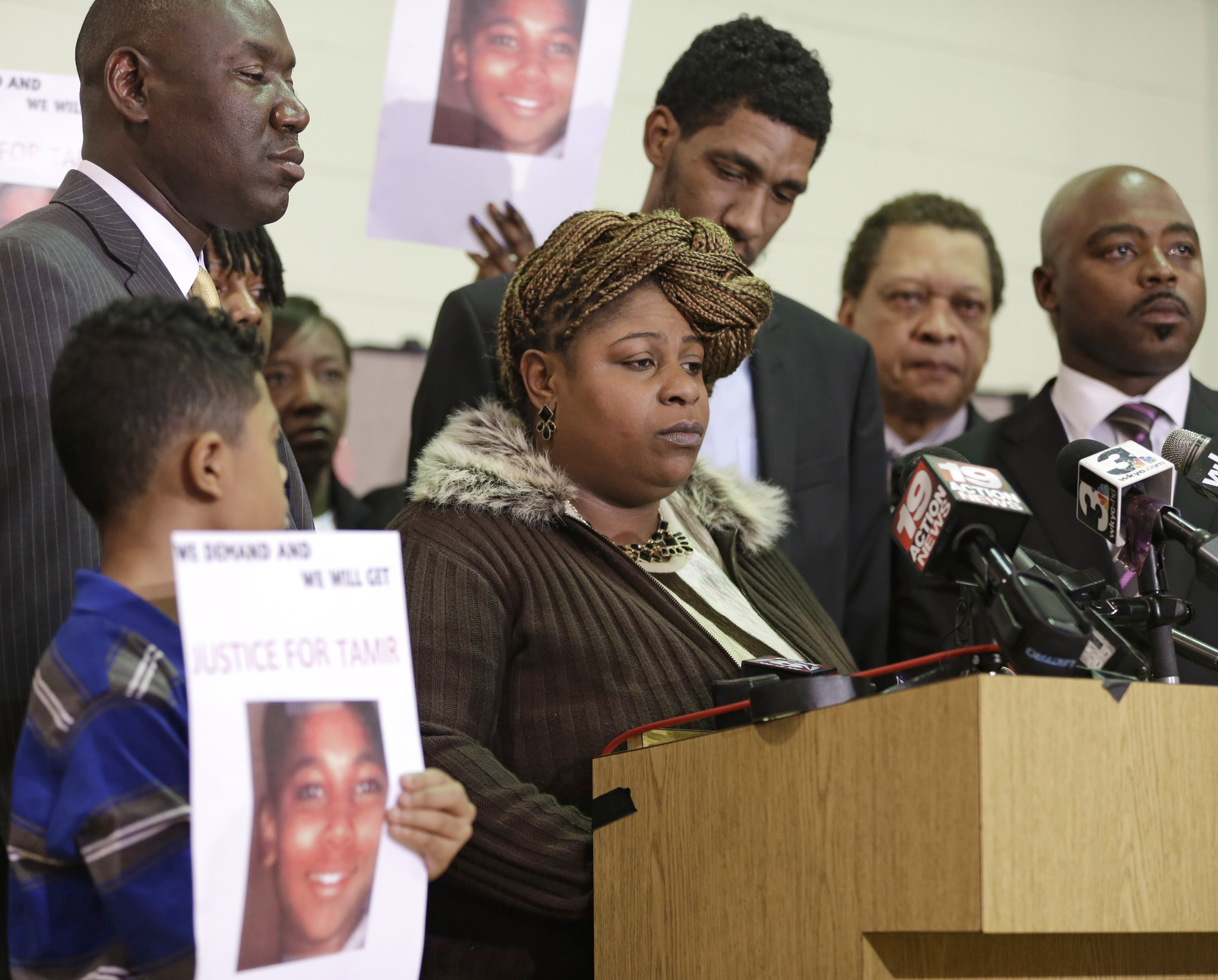 CLEVELAND -- The mother of a 12-year-old boy fatally shot by a Cleveland police officer said she is "looking for a conviction" in the case.

Surveillance video released by police shows Tamir Rice being shot within 2 seconds of a patrol car stopping within a few feet of him at a park on Nov. 22. The video shows the boy reaching in his waistband for what police later discovered was an airsoft gun, which shoots nonlethal plastic projectiles. He died the next day.

Rice's mother, Samaria Rice, made her first public comments about the incident on Monday. She said that two boys knocked on her door to inform her that her son had been shot twice.

"I noticed the police ... weren't doing anything. I arrived the same time the ambulance did," she said, adding that police handcuffed and questioned her daughter.

She said that her son got the toy gun from a friend.

"Tamir was a bright child, he had a promising future, and he was very talented in all sports - soccer, basketball, football. He played the drums, he drew, he played video games, he's agreat swimmer," Rice said.

She said her son was a well-liked sixth grader who volunteered at the recreation center where he was killed.

Her comments followed the family's filing of a wrongful death lawsuit Friday, alleging two officers acted recklessly when they confronted the boy in a terrifying manner and fired within seconds.

The federal lawsuit filed against the city and the two officers also said the officers waited four minutes before anyone provided medical help to Rice after he was shot outside a city recreation center.

Police were responding to a 911 call about a gun at a playground. The officers had a chance "to safely initiate their encounter from a safe distance but instead stopped their cruiser immediately next to young Tamir," the lawsuit said.

Police have said rookie officer Tim Loehmann believed the boy had a real firearm. The officer's father has said his son had no other choice. A grand jury will consider whether charges are merited.

"Young boys playing with replica guns are commonplace in America and police are expected to approach them safely if an investigation is warranted, not shoot them dead within two seconds," said the lawsuit filed in U.S. District Court. It seeks unspecified monetary damages.

Tamir was alone and not pointing the pellet gun at anyone when the officers arrived, the lawsuit said.

A spokesman for the city declined to comment on the lawsuit. Court documents did not list the name of Loehmann's attorney.

The shooting has sparked protests across Cleveland.

About 75 people chanting "no justice, no peace" and "hands up, don't shoot" marched through downtown Friday afternoon and briefly blocked traffic on a bridge that crosses the Cuyahoga River. Police officers diverted traffic as protesters lay in the street.

On Thursday, the U.S. Justice Department released findings from a nearly two-year investigation of Cleveland police, which found its officers use excessive and unnecessary force far too often.

The report did not look into Tamir's death, but U.S. Attorney General Eric Holder, while announcing the report's findings, said that the deaths of young blacks, including in New York City and Ferguson, Missouri, have raised urgent national questions about the sense of trust between police and communities.

Loehmann joined Cleveland police in March after spending six months in 2012 with the police department in suburban Independence.

The lawsuit noted that personnel files released earlier this week showed that police supervisors in Independence decided Loehmann lacked the maturity needed to work in their department. A letter in his file said there was a pattern of a lack of discretion and not following instructions.

Loehmann was described by former supervisors as a "distracted and weepy" officer who failed to follow orders during firearms training, CBS affiliate WOIO reported.

"In law enforcement there are times when instructions need be followed to the letter, and I am under the impression Ptl. Loehmann, under certain circumstances, will not react in the way instructed," the letter said.

Loehmann resigned from the Independence Police Department in December 2012 after meeting with his supervisors about their concerns.