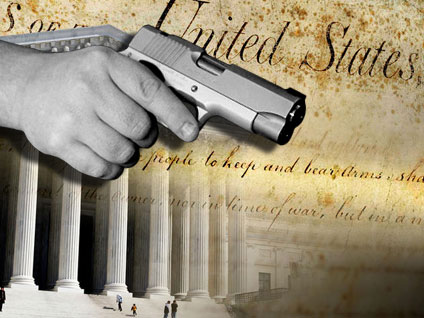 The Supreme Court held Monday that the Constitution's Second Amendment restrains government's ability to significantly limit "the right to keep and bear arms," advancing a recent trend by the John Roberts-led bench to embrace gun rights.

By a narrow, 5-4 vote, the justices also signaled, however, that some limitations on the right could survive legal challenges.

Writing for the court in a case involving restrictive laws in Chicago and one of its suburbs, Justice Samuel Alito said that the Second Amendment right "applies equally to the federal government and the states."

The court was split along familiar ideological lines, with five conservative-moderate justices in favor of gun rights and four liberals opposed. Chief Justice Roberts voted with the majority.

Two years ago, the court declared that the Second Amendment protects an individual's right to possess guns, at least for purposes of self-defense in the home.

That ruling applied only to federal laws. It struck down a ban on handguns and a trigger lock requirement for other guns in the District of Columbia, a federal city with a unique legal standing. At the same time, the court was careful not to cast doubt on other regulations of firearms here.

Gun rights proponents almost immediately filed a federal lawsuit challenging gun control laws in Chicago and its suburb of Oak Park, Ill, where handguns have been banned for nearly 30 years. The Brady Center to Prevent Gun Violence says those laws appear to be the last two remaining outright bans.

Lower federal courts upheld the two laws, noting that judges on those benches were bound by Supreme Court precedent and that it would be up to the high court justices to ultimately rule on the true reach of the Second Amendment.

The Supreme Court already has said that most of the guarantees in the Bill of Rights serve as a check on state and local, as well as federal, laws.

Monday's decision did not explicitly strike down the Chicago area laws, ordering a federal appeals court to reconsider its ruling. But it left little doubt that they would eventually fall.

Still, Alito noted that the declaration that the Second Amendment is fully binding on states and cities "limits (but by no means eliminates) their ability to devise solutions to social problems that suit local needs and values."

The case was McDonald v. Chicago.

In other rulings released Monday:

• The Court has rejected appeals by the Obama administration and the nation's largest tobacco companies to get involved in a legal fight about the dangers of cigarette smoking that has stretched more than 10 years.

The court's action, issued without comment Monday, leaves in place court rulings that the tobacco industry illegally concealed the dangers of smoking for decades. But it also prevents the administration from trying to extract billions of dollars from the industry either in past profits or to fund a national campaign to curb smoking.

In asking the court to hear its appeal, the administration said the industry's half-century of deception "has cost the lives and damaged the health of untold millions of Americans."

The appeal was signed by Elena Kagan, the solicitor general, a couple of months before President Barack Obama nominated her to the Supreme Court.

• The Court will enter into the nation's charged debate over immigration, agreeing to hear a challenge from business and civil liberties groups to an Arizona law that cracks down on employers who hire undocumented workers.

The justices on Monday accepted an appeal from the Chamber of Commerce, American Civil Liberties Union and others to a lower court ruling that upheld Arizona's law. The measure requires employers to verify the eligibility of prospective employees through a federal database called E-Verify and imposes sanctions on companies that knowingly hire undocumented workers.

• The Court refused to hear an appeal from the Holy See to stop a lawsuit that accuses the Vatican of transferring a priest from city to city despite repeated accusations of sexual abuse.

Sovereign immunity laws hold that a sovereign state - including the Vatican - generally is immune from lawsuits. But a judge had ruled that there was enough of a connection between the Vatican and the Rev. Andrew Ronan (who was transferred from Ireland to Chicago to Portland, Ore.) for him to be considered a Vatican employee under Oregon law; that ruling was upheld by the 9th U.S. Circuit Court of Appeals in California.

According to court documents, Ronan began abusing boys in the mid-1950s as a priest in the Archdiocese of Armagh, Ireland. He was transferred to Chicago, where he admitted to abusing three boys at St. Philip's High School. Ronan later was moved to St. Albert's Church in Portland, where he was accused of abusing the person who filed the lawsuit now under appeal. Ronan died in 1992.

• The court struck down part of the anti-fraud law enacted in response to Enron and other corporate scandals, but said its decision has limited consequences.

Under the 2002 the Sarbanes-Oxley law, Congress created the Public Company Accounting Oversight Board to replace the accounting industry's own regulators amid scandals at Enron Corp., WorldCom Inc., Tyco International Ltd. and other corporations. The board has power to compel documents and testimony from accounting firms, and the authority to discipline accountants.

The justices voted 5-4 that a provision of the law violates the Constitution's separation of powers mandate. Sarbanes-Oxley will remain in effect, but the Securities and Exchange Commission now will be able to remove board members at will.

• The court rejected an appeal by the publisher of a financial newsletter found guilty of securities fraud. Pirate Investor LLC (now known as Stansberry and Associates Investment
Research) and Frank Porter Stansberry had sold a report purporting to offer a "Super Insider Tip" relating to a still-unannounced deal between USEC, an American company that enriches uranium and the Russian government.

In 2002 Stansberry wrote a newsletter saying he had interviewed a company executive who told him to watch their stock on May 22; the executive later denied saying that, but the e-mail solicitation predicted USEC's stock price would more than double. Stansberry's company made hundreds of thousands of dollars from selling reports. Within two weeks trading in shares of USEC rose from 189,000 shares a day to an average of 3.3 million.

News organizations, including The Associated Press, said the prosecution is in violation of the First Amendment. But federal judges have upheld the conviction.

• An ideologically split court ruled that .

The Christian Legal Society had sued to get funding and recognition from the University of California's Hastings College of the Law, whose policy said no recognized campus group may exclude people due to religious belief or sexual orientation.

The court on a 5-4 judgment upheld lower court rulings that CLS's First Amendment rights of association, free speech and free exercise were not violated by the college's decision to deny recognition and funding.

Justice Ruth Bader Ginsburg wrote that CLS "seeks not parity with other organizations, but a preferential exemption from Hastings' policy."

In his dissent. Justice Samuel Alito wrote that the college's decision was aimed at preventing any freedom of expression "that offends prevailing standards of political correctness."

This Is Your Brain Online