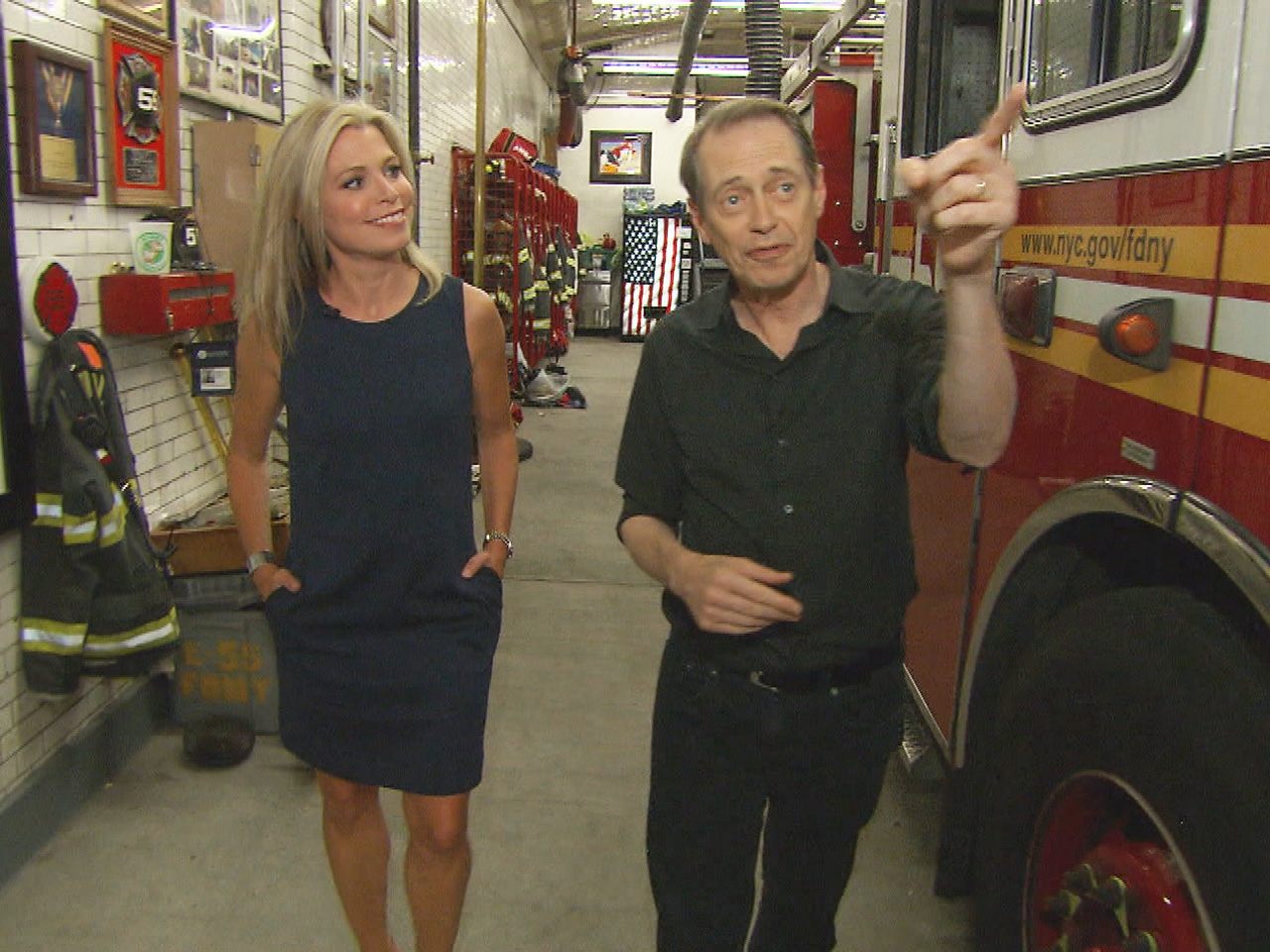 Actor Steve Buscemi plays a bit of a villain in the hit series, "Boardwalk Empire." But not in real life. Sometimes nice guys do finish first, as Tracy Smith discovers in our "Sunday Morning" Profile:

It's the stuff actors only dream of: At the red carpet premiere for the final season of HBO's "Boardwalk Empire," Steve Buscemi was the center of attention. After years of playing supporting roles, there's no doubt he's enjoying this moment.

Well, maybe not this exact moment.

Truth is, Buscemi's much more at ease when he's making everyone else squirm.

For years he's been playing the second- or third-fiddle. He was a ruthless gangster (and enemy to all waiters) in "Reservoir Dogs"; and the Best Man from Hell in "The Wedding Singer."

"I never saw Nucky as a leading man," Buscemi said. "I just saw him as he was, like, the guy. He was the guy you had to go through to get things done in Atlantic City."

"You play a lot of creepy guys, but they're sympathetic creepy guys most of the time," said Smith. "There's something that you find to like about them. Is that important to you, to make them likable?"

"It's not important to me that they're likable," he replied. "But there has to be something that I like about them."

As a kid growing up on Long Island, N.Y., Buscemi had dreams of being an actor. But his father -- a career sanitation worker -- had another dream for his four sons: a steady paycheck.

"Whatever civil service exam came up when we were 18, we had to take it if we chose to live under his roof," Buscemi said.

And the idea was? "He was looking out for us."

Buscemi took and passed the test for firefighters, and in 1981 wound up at Engine 55 in Lower Manhattan. He's one of the guys now, but back then it was a different story.

"It was very intimidating," he said. "I was just nervous, you know? I was, like, the quietest guy in the firehouse for a long time."

And when his shift ended, he'd moonlight as an actor. He kept up his double life for four years. But when he got a part in the movie "Parting Glances," he quit the department.

The guys at Engine 55 thought he was nuts.

"They were really worried about me," Buscemi said. "Because nobody leaves this job, you know? You just don't. You don't leave, first of all, a great job like this, and then also a secure job."

In a way, he would always stay connected to that job. But in 1985, he needed to see what lay beyond the big red door.

"I was cast as a drug dealer on 'Miami Vice.' And I was like, 'Okay, you really think I can do this? Fine.' And then that was sort of the start of me getting these, you know, in the beginning, really kind of seedy, kind of sleazy characters. And [it] kind of progressed from there."

"What do you think they saw in you that you started to play the sleazy guy, the creep?"

Talent might have something to do with it, too. No matter the part -- and there have been well over 100 -- Buscemi makes it his.

"Have you had people say to you, 'Oh, if you only fixed your teeth'?"

"Sure, yeah. It's always the joke," he laughed. "My own dentist says to me, 'You know, we could do something, we could fix this,' and I say, 'Are you trying to put me out of work?'

For 27 years Buscemi has been married to artist Jo Andres -- partners in life and art. "I'll be driving in the car, and she'll be telling me to slow down, and I don't know what she's doing, and she's taking pictures out the window," he said.

Their Brooklyn townhouse is decorated with her works -- including a cyanotype, a process of photography that dates from 1842.

They met back when he was still at Engine 55.

Smith asked her, "Did the firefighter thing add to the appeal?"

"He was the only person I knew with a real job that made money," she laughed.


"She wasn't impressed that I was a fireman," Buscemi said. "That was not the impressive. I was trying to impress her with the boots and the coat -- and she didn't care!"

A decade later, the world changed.

In the hours following the attacks on the World Trade Center, with reports that hundreds of firefighters were either dead or buried alive in the burning wreckage, Buscemi felt that he had no choice but to run, once again, toward the fire.

"When 9/11 happened, I came back here on the 12th and had my gear, I still had my old, you know, my turnout coat and my helmet and the boots."

He volunteered to spend the next five days at Ground Zero, digging through the pile.

He described the scene around the World Trade Center as if "you were on another planet. It was unrecognizable as what you thought it was before. I had no bearing of, like, where I was, you know?

"It was really confusing and disconcerting. There was something about being there that was also very comforting, and I remember that surprising me. I went there to help, but I was the one who was helped, you know? It really helped me."

Now Buscemi's hoping to give back, with the documentary "A Good Job," premiering on HBO tomorrow night. Filled with interviews done by Buscemi himself, it's an inside look at what it means to be a firefighter in New York City, and all the challenges that come with it.

"Firefighters are great at helping others," he said. "They're great at helping each other. But they don't always know that they themselves are in need, you know? Their first reaction would be, 'Oh, the next guy has it worse, you know? It was nothing, you know, that I went through. It wasn't just that bad. But that guy? Oh, that family, you know? They had it worse. So what right do I have to seek any kind of help?' So really the film is for them."

Through it all, Steve Buscemi has kept that firefighter's modesty, seeing himself as a supporting character, even when others see him as a star.

Smith asked, "Now that he's this big, leading-man role, I'm just wondering -- as his wife -- have you seen him as that all along?"

Smith said, "This is the thing, is you play all these kinda scary, often mean guys, but the truth is, nothin' farther from the truth?"

"Wait 'til this interview is over!" Buscemi laughed.

To watch a trailer for "A Good Job" click on the video player below.