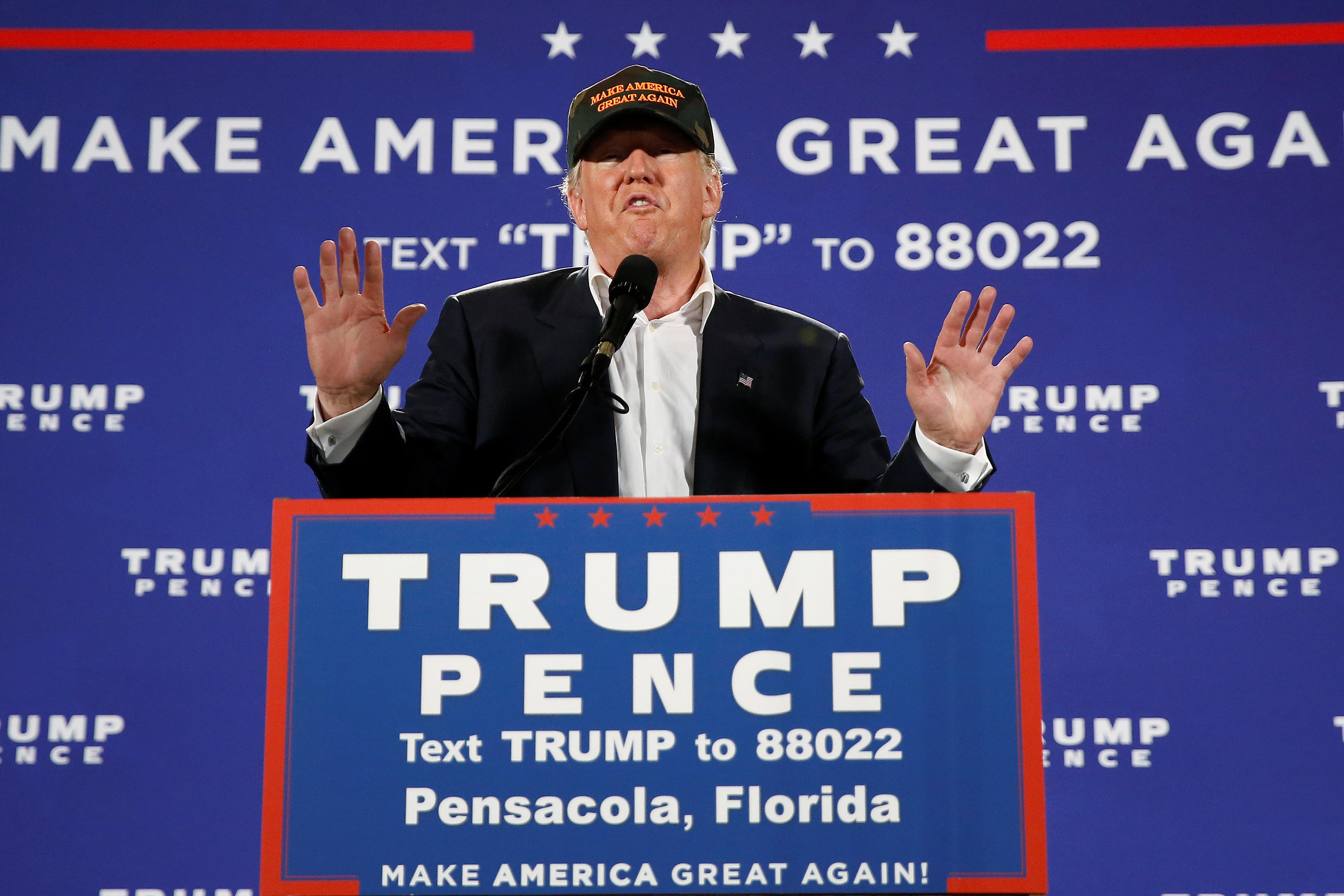 PENSACOLA, Florida “It’s feeling like it already,” Donald Trump said of winning the White House, less than a week before votes would be tallied.

And then the GOP nominee seemed to lapse into an internal monologue.

He closed his self-administered public pep talk by repeating the word, “Niceeee…” He hung on to it for emphasis.

“Because I’ve been watching Hillary the last few days,” Trump continued. “She’s totally unhinged. We don’t want any of that. She has become unhinged.”

Call it Trump 5.0. This iteration of the blustery businessman is showing a laser-like focus. In three campaign stops around Florida on Wednesday, Trump kept his deviations from the teleprompter to a minimum – for Trump anyway. He stayed on message throughout the day, and over the last couple days, he’s consistently targeted his attacks at Hillary Clinton. This kind of sustained discipline has not been evident before in his campaign.

“If Hillary Clinton were to be elected, it would create an unprecedented and protracted constitutional crisis. Haven’t we just been through a lot with the Clintons?” Trump said.

All three of Trump’s rallies Wednesday were outdoors in Florida -- in Miami, Orlando and Pensacola. Pensacola is located in the Florida Panhandle, an area where Trump enjoys strong support.

“I want you to leave happy tonight, knowing that we’re gonna make America great again, okay?” Trump told a crowd of thousands at the amphitheater.

Trump’s new demeanor presented a stark contrast with his previous two rallies in Pensacola, one in the primaries and another just a few months ago in September.

During his January event here, Trump had trouble with his microphone. Putting aside his issues with microphones this election cycle, whether the comments bragging about inappropriate grabbing of women caught on a hot mic from a 2005 “Access Hollywood taping” or the faulty microphone from the first general election debate, Trump didn’t try to hide his irritation about the malfunction.

“By the way, I don’t like this mic,” Trump said. “Whoever the hell built this mic system, go [INAUDIBLE] the son of a bitch that put this in. It keeps popping.”

The inaudible part of that quote could is up to anyone’s imagination, but it likely had to do with the microphone. Then he turned to a campaign staffer, his head of advance, George Gigicos.

“You hear me, George? Don’t pay. Don’t pay! You know, I believe in paying but when somebody does a bad job, like this stupid mic, we shouldn’t pay the bastard. Don’t.”

At that same rally, Trump went after his then-rival Ted Cruz, at a moment when Trump had decided to make Cruz’s citizenship an issue.

“Got to sort of make sure you can run,” Trump said. “A lot of lawyers say you can’t run if you do that. You can’t be born in Canada. You can’t be a Canadian citizen. And I hope it works out for him. I really do.”

At Trump’s second Pensacola event, in early September, this time as the official Republican nominee, Trump was in rare form, hitting a few hot topics.

“She could walk into this arena right now and shoot somebody with 20,000 people watching right smack in the middle of the heart and she wouldn’t be prosecuted, okay?”

“When they circle our beautiful destroyers, with their little boats and they make gestures at our people, that they shouldn’t be allowed to make, they will be shot out of the water. Okay? Believe me.”

Now in the homestretch of one of the most implausible presidential runs in history, Trump has morphed into an almost unrecognizable candidate.

At his second stop on Wednesday in Orlando, Trump thanked his supporters and parents, delivering an almost-victory or concession-like riff.

“It’s been the honor of my life to share this journey with you,” Trump said. “It has absolutely been. There are two people who I did not really get to share this with. But were in my thoughts often and that’s my mother and my father. Great people.”

He told his audiences to “dream big” and that casting their votes for him would bring about the “change you’ve been waiting for your entire life.” He has repeated this sentiment for days.

Shades of the former Trump still show up, though. He referred to Clinton as “unhinged” several times on Wednesday and mentioned that interim-Democratic National Committee chair, Donna Brazile, apparently leaked questions to a primary town hall debate to Clinton, based on WikiLeaks emails that seemed to show Brazile tipping off the Clinton campaign about questions to be asked at a CNN-sponsored town hall that included Clinton and her primary opponent, Vermont Sen. Bernie Sanders.

“The worst level,” Trump said at an early afternoon stop in Miami. “Instead of reporting this breach to an ethics committee or whoever would listen to the breach …So [Clinton] got the answers – cheating -- she got the questions – cheating  -- and then she, rather than reporting them, rather than saying, ‘This shouldn’t be happening,’ she used them against Bernie Sanders. She probably got them against me, too, except we won the debates so easy, I don’t think it mattered. We won those debates.”

The WikiLeaks revelations about Brazile sent him on another tangent, an old favorite theme.

“Did you see her at the end of the debates?” Trump said of Clinton. “Folks, she was exhausted. You know what she did? She immediately went home and went to sleep.”