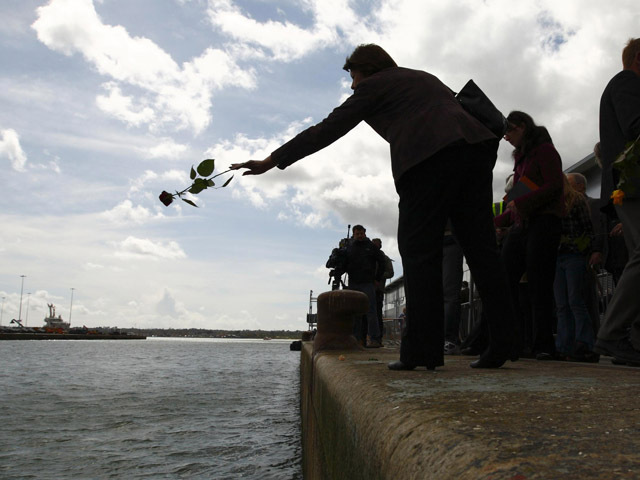 (AP) LONDON - Exactly 100 years from the day when the ill-fated Titanic sailed from Southampton, the English port city is paying tribute with a series of events to mark the tragic anniversary.

Southampton was home to more than a third of the more than 1,500 people who died when the ship hit an iceberg and sank on April 15, 1912.

On Tuesday, more than 650 descendants of those on board gathered for a ceremony at the same berth on the city's docks where the Titanic set sail on April 10, 1912.

They threw flowers and wreaths into the water where the White Star liner left port, then a moment of silence was held to remember those who lost their lives in the tragedy.

A recording of the Titanic's whistle sounded on the docks at noon — the exact moment the RMS Titanic slipped her moorings — before a boat built in the same era re-enacted the doomed liner's departure.

The dockside service ended with the hymn "Nearer My God To Thee," which was said to have been played by the ship's musicians as Titanic sank.

Vanessa Beecham, from Southampton, paid tribute to her great uncle Edward Biggs, a firefighter aboard who died at age 21. She said the ceremony was "tasteful and moving."

"It was a worry during the anniversary that the families would be forgotten in all the razzmatazz ... but this was lovely," she said.

Later, hundreds of Southampton schoolchildren paraded to the city center carrying placards with photographs of locals who had died aboard the ship.

Southampton also opened a new museum — SeaCity — on Tuesday. The museum tells the story of Southampton's connection to the sea, with a focus on the Titanic story.

The museum opening and tributes in Southampton are among the many commemorations and memorials to the reputedly unsinkable ship that have sprung up to coincide with the 100th anniversary of the Titanic's final voyage.

On Sunday, Southampton saw off the MS Balmoral on a 12-day Titanic Memorial Cruise to retrace the route of the Titanic with the exact same number of passengers aboard.