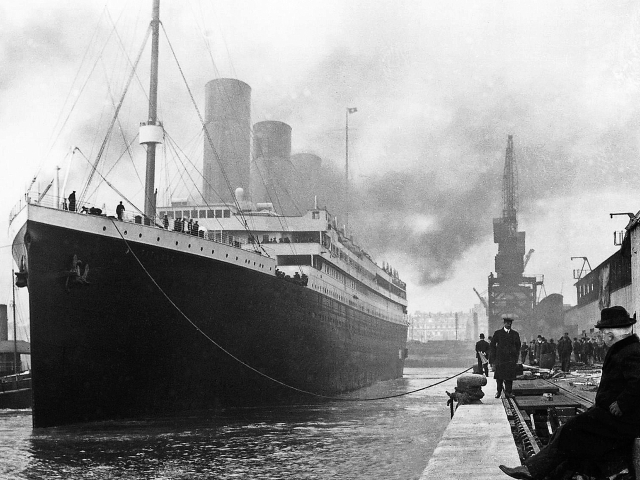 The 1997 film "Titanic" told one version of the story of the sinking of that supposedly unsinkable ocean liner which sank exactly one hundred years ago today. Descendants of some of those on board have their own stories to tell, and they told them to our Michelle Miller:

One hundred years ago today, at 2:20 on the morning on April 15, 1912, the Titanic — a ship believed by many to be unsinkable — sank after hitting an iceberg.

More than 1,500 people died that night in the frigid waters of the North Atlantic, where Titanic's haunting hulk still rests.

It's a story you would have to live under a rock (or an iceberg) not to know at least something about.

Just this year, nearly 100 books on the Titanic have been published, in English alone. There's a new museum in Belfast, Northern Ireland, where the great ship was built; and another in Southampton, England, the port from which she set out.

In Pigeon Forge, Tennessee — which has no connection whatsoever to the actual event — millions of visitors have come for a "Titanic experience."

This fascination with Titanic is not new. Nor is the search for the larger meanings of that epic event.

To one survivor, Jack Thayer, the Titanic disaster ushered in a new, and frightening world. "To my mind the world of today awoke April 15th, 1912," he wrote.

"For Jack Thayer, who went on to fight in World War I and sent two sons off to World War II, the Titanic was the beginning of modernity for him," said Paris Review editor Lorin Stein.

For James Cameron, whose 1997 Oscar-winning movie was just released in 3-D, Titanic became an obsession.

"Certainly there have been bigger disasters — Hiroshima, the tsunami in Indonesia which took 250,000 lives a few years ago," Cameron said. "But Titanic, there's just something perfect about it as a lesson in human nature. The people showed heroism; people showed cowardice. The guy in women's clothes, the people who stepped out of the boat [and] gave their seat to others. I think we all wonder, if we had two hours to live, how would we act?

"It's the ultimate test of character."

The noble actions of Ida and Isidor Straus, who, in those last two hours, chose love over survival, have been celebrated for a hundred years.

When offered a place in a lifeboat, Ida Straus chose to stay with her husband.

"She said, 'We have lived together and now we will die together," said her great-grandson, Paul Kurzman. "And arm-in-arm, walked along the deck, prepared to die as the ship went down at sea."

Kurzman pulled out a locket that was recovered from his body.

For him, there are no bitter memories of that night: "They had a death that was beautiful, if one may use that term. They died as they lived."

Jackie Astor Drexel is the granddaughter of John Jacob Astor, the richest and most famous man on board the Titanic. She said, "In many ways, the sinking of the ship blew apart our family. ... People just never wanted to talk about the Titanic."

Astor and his second wife, Madeleine, were on their way home from their honeymoon the night Titanic hit the iceberg. Madeleine survived, John Jacob did not.

Madeleine (Jackie Astor Drexel's grandmother) was just 18 years old and pregnant when her husband helped her into Lifeboat #4, along with other women from the first class cabins.

"He asked if he could go along with his wife, who was pregnant with my father," Drexel said. "And they said 'No, women and children first.' He said 'Fine.'"

"Is it true he saluted your grandmother?" asked Miller.

The events of that night in 1912 haunted Jack Thayer for the rest of his life. Decades later, he wrote about it - a first-person account Lorin Stein edited for re-publication this year.

"Her deck was turned slightly toward us. We could see groups of almost fifteen-hundred people still aboard...
"Clinging in clusters or bunches, like swarming bees, only to fall in masses, pairs or singly, as the great after-part of the ship, 250 feet of it, rose into the sky."

For Stein, a distant relative of Thayer, the ghastly images are hard to shake, haunting: "It's very fresh in my mind. There are certain things he describes, like the moment when the ship went under and the people in the lifeboats watched it go down, and there are 1,500 people now floating in the water. And he says a great sob or sigh went up. And anyone, any New Yorker remembers the moment when the first tower went down, on the street, it was the same sigh or sob.

"This stuff is fresh."

Last Tuesday, descendants of Ida and Isidor Straus gathered at Macy's — the store Isidor co-founded — to honor their memories .

"I am so pleased there are so many family members here," said Kurzman.

And on this 100th anniversary , a new, and very special invitee - Lee Moore, a rabbi from Kent, Ohio. He said his grandfather told a story of a wealthy woman who gave up her seat: "And because of that, they got onto a lifeboat."

Before the Straus family contacted her a few years back, Lee Moore never dreamed her great-grandmother Bella, and her grandfather — just seven at the time — third class passengers, might be connected to Isidor and Ida Straus.

But indeed, family research has shown that it's just possible her great grandmother and grandfather were saved when Ida Straus made her selfless decision to stay with her husband.

"There's a chance I wouldn't be here if Ida hadn't given up her seat," Moore said.

One hundred years later, a new connection. A new chapter in the story that is still very much alive.