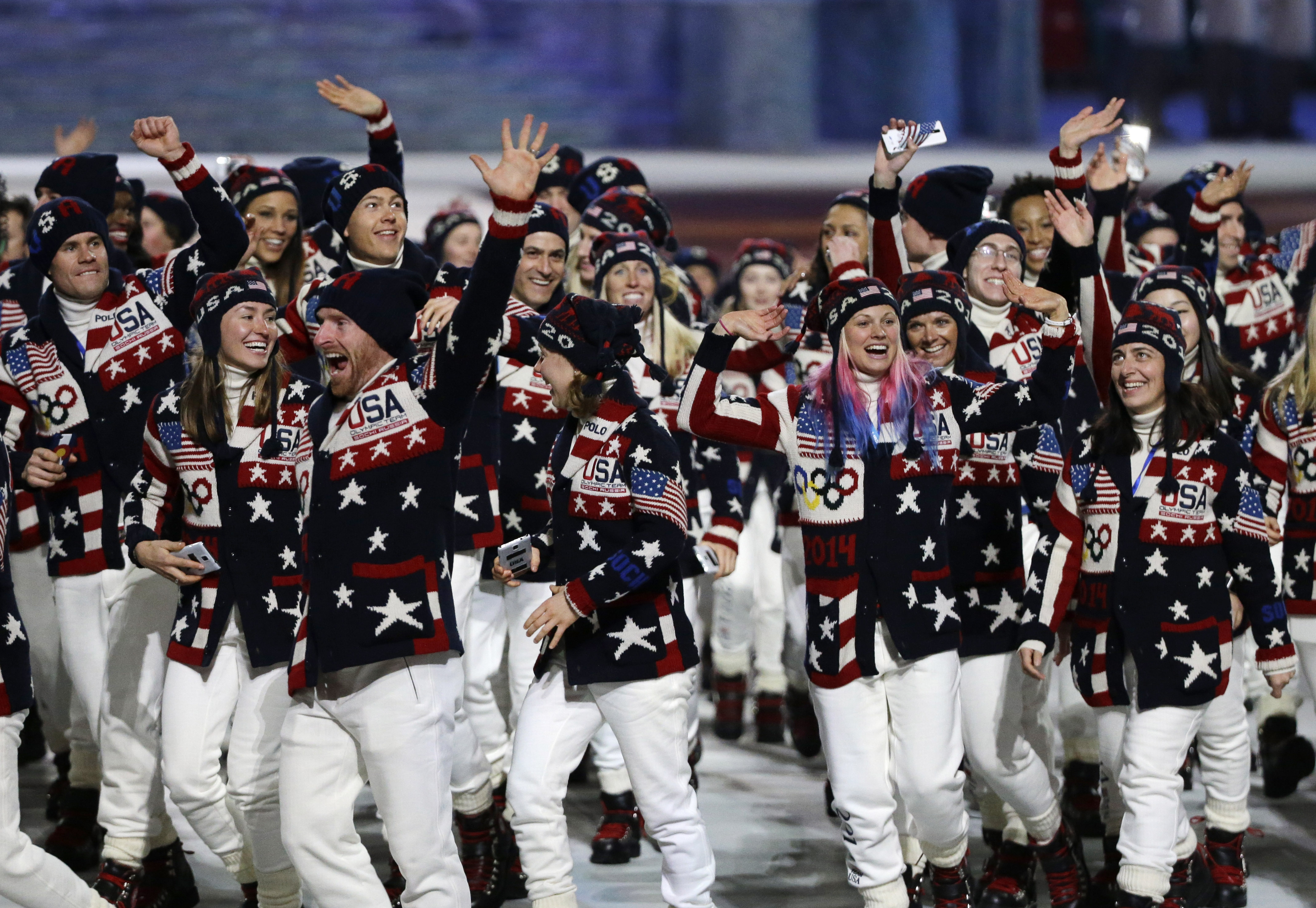 SOCHI, Russia -- A crowning achievement of Vladimir Putin's Russia kicked off Friday with a celebration of its past greatness and hopes for future glory, most especially for a raucous group of Russian athletes who marched into the rollicking opening ceremony of the Sochi Olympics with a message.

To the best athletes in the world, who they've invited to the edge of the Black Sea to compete on ice and snow, amid concerns about terrorism and criticism of intolerance of gay people, they sang: you're "not gonna get us."

Just after the sun set over the Caucasus Mountains and along the seashore just outside Fisht Stadium in the wet-paint-fresh Olympic Park, Russian TV star Yana Churikova shouted to a crowd still taking their seats: "Welcome to the center of the universe!"

For the next two weeks, it certainly is for the 3,000 athletes who will compete in 98 events, more people and contests than ever at the Winter Games.Every athlete who makes it to Sochi is honored with the title Olympian, but who might be deemed the games' stars at the closing ceremony?

Well, American snowboarder Shaun White is certain to wow crowds in the Krasnaya Polyana resort halfpipe. On the ice, Canadian hockey players Sidney Crosby and Jonathan Toews will try to add another gold medal to their collection of Stanley Cups. In the rink, American's Ashley Wagner and Gracie Gold will try to dethrone South Korean marvel and defending goal medalist Yuna Kim.

It will be, too, for all those worried the games will be a target for terrorism, fears of which were stoked during the ceremony itself when a passenger aboard a flight bound for Istanbul said there was a bomb on board and tried to divert the plane to Sochi. Authorities said the plane landed safely in Turkey.

The show opened with a hiccup, as the lighting of the five Olympic Rings overshadowed the singing of the Russian national anthem. Five snowflakes on cables drifted together above the stadium, and four of them turned into Olympic rings - but the fifth never unfurled and they all failed to erupt into white flames as planned.

Also missing from the show: Putin's repression of dissent, those worries of terrorism and inconsistent security measures at the Olympics, which will take place just a few hundred miles (kilometers) away from the sites of an insurgency and routine militant violence. Also looked over: the tensions with the United States over neighboring Ukraine, NSA leaker Edward Snowden and Syria.

And the poorly paid migrant workers who helped build up the Sochi site from scratch, the disregard for local residents, the environmental abuse during construction, the pressure on activists, and the huge amounts of Sochi construction money that disappeared to corruption.

Some world leaders purposely stayed away, but U.N. Secretary-General Ban Ki-moon and dozens of others were in Sochi for the ceremony. He didn't mention the very real anger over a Russian law banning gay "propaganda" aimed at minors that is being used to discriminate against gay people.

But IOC President Thomas Bach won cheers for addressing it Friday, telling the crowd it's possible to hold Olympics "with tolerance and without any form of discrimination for whatever reason."

U.S. delegate Billie Jean King missed the opening ceremony to be with her ailing mother who died in Arizona, but she told CBS News that she hopes the media keeps Russia's controversial gay rights record  in the headlines.

For all the criticism, there was no shortage of pride at the ceremony in what Russia has achieved with these games. The head of the Sochi organizing committee, Dmitry Chernyshenko, captured the mood of many Russians present when he said, "We're now at the heart of that dream that became reality."

"The games in Sochi are our chance to show the whole world the best of what Russia is proud of," he said. "Our hospitality, our achievements, our Russia!"

The ceremony was a celebration of Russia and presented Putin's version: a country with a rich and complex history emerging confidently from a rocky two decades and now capable of putting on a major international sports event.

Putin was front and center, accepting the invitation from Bach to open the games from his box high above the stadium floor. Earlier, he looked down as the real stars of the games - those athletes, dressed in winter wear of so many national colors to ward off the evening chill and a light man-made snow - walked onto a satellite image of the earth projected on the floor, the map shifting so the athletes emerged from their own country.

As always, Greece - the birthplace of Olympic competition - came first in the parade of nations. Five new teams, all from warm weather climates, joined the Winter Olympics for the first time. Togo's flagbearer looked dumbstruck with wonder, but those veterans from the Cayman Islands had the style to arrive in shorts!

The smallest teams often earned the biggest cheers from the crowd of 40,000, with an enthusiastic three-person Venezuelan team winning roars of approval as flag bearer and alpine skier Antonio Pardo danced and jumped along to the electronic music.

Only neighboring Ukraine, scene of a tense and ongoing standoff between a pro-Russian president and Western-leaning protesters, could compete with those cheers.

That is, until the Russians arrived.

Walking in last to a thundering bass line that struggled to overcome the ovations from the hometown crowd, the Russians reveled in all the attention. Their feeling could perhaps best be summed up by Russian singers Tatu, whose hit "Not Gonna Get Us" accompanied them to their seats.

Russians place huge significance in the Olympics, carefully watching the medal count - their dismal performance in Vancouver four years ago is on the minds of many. These games are particularly important, as many Russians are still insecure about their place in the world after the end of the Cold War and the years since that have seen dominance of the United States and China.

Perhaps cuing on those feelings, it didn't take long for the classic Russian pride to come shining through at the opening ceremony.

As Churikova rallied the crowd to scream "louder than ever," she told the fans in their cool blue seats their keepsakes from the night would last 1,000 years. When explaining the show would be hosted in English, French and Russian, she joked that it didn't matter, because in Sochi, everyone "speaks every language in the world."

The moment of high pride came at the end, when Russian hockey great Vladislav Tretiak and three-time gold medalist Irina Rodnina joined hands to light the Olympic cauldron. He's often called the greatest goaltender of all time by those who saw him play, she won 10 world pairs figure skating titles in a row.

That was how it ended. At the top, the show - and the games - cleared the first chance to focus on one of those issues Putin would prefer the world to avoid talking about during the next two weeks without so much as a wink.

The women in Tatu, who put on a lesbian act that is largely seen as an attention-getting gimmick, merely held hands during their performance on this night, stopping short of the groping and kissing of their past performances.

At the MTV awards in 2003, the duo performed with dozens of young women dressed in tightfitting schoolgirl uniforms that they stripped off in the end.