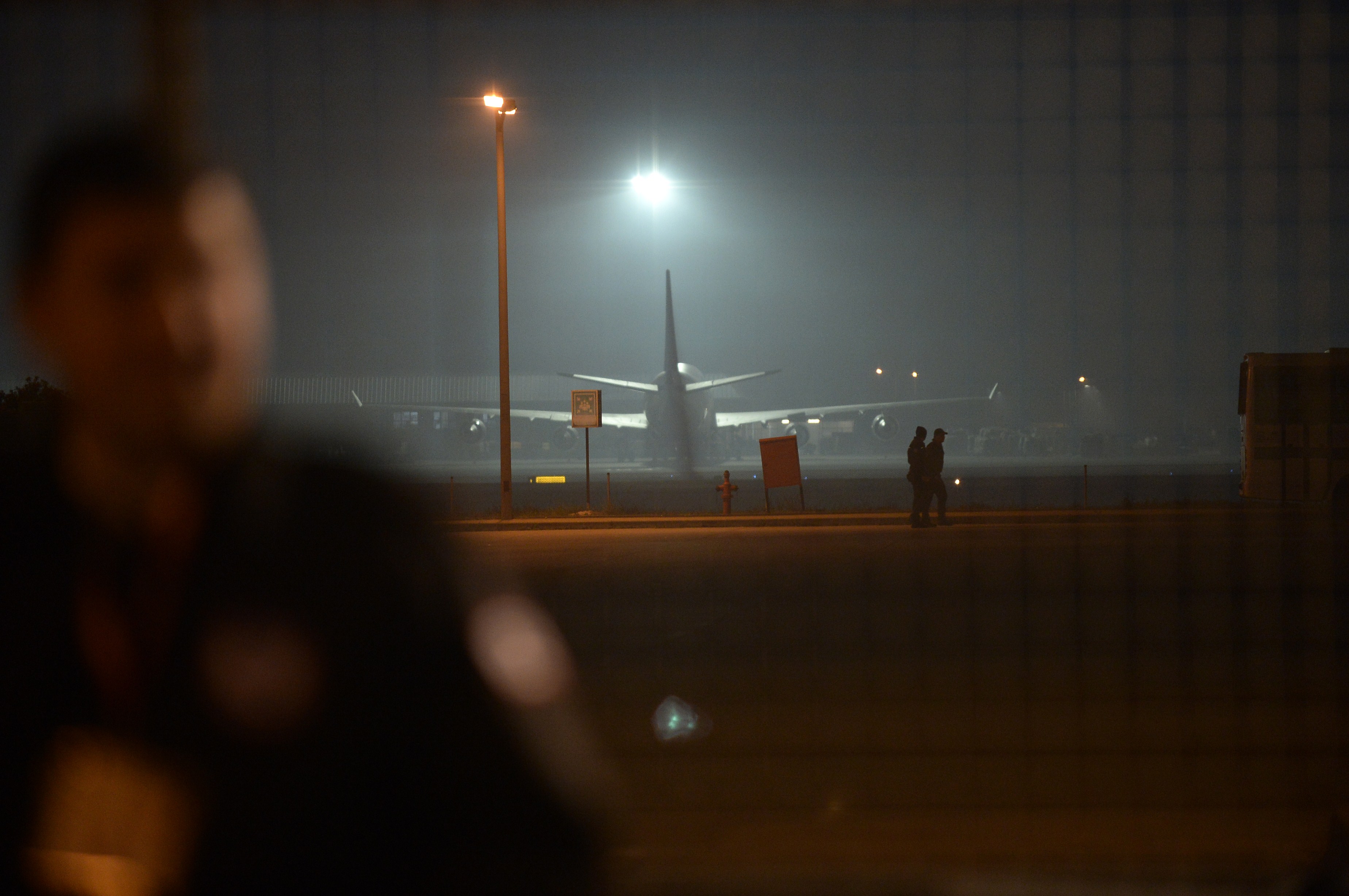 ANKARA, Turkey - A Ukrainian man tried to hijack a Turkey-bound flight to Sochi, Russia, as the Winter Olympics were kicking off Friday, but the pilot tricked him and landed in Istanbul instead, where he was stealthily detained after a four-hour stand-off on a plane full of passengers, an official said.

The hijacking drama came as the Winter Olympics opened in the Russian resort city, with thousands of athletes from around the world pouring into the tightly secured stadium amid warnings the games could be a terrorism target.

A Turkish F-16 fighter was scrambled as soon as the pilot on the Pegasus Airlines flight from Kharkiv, Ukraine, with 110 passengers aboard signaled there was a hijacking attempt, according to NTV television. It escorted the plane safely to its original destination at Sabiha Gokcen airport in Istanbul.

Officials credited the pilot and crew for convincing the 45-year-old-man, who claimed he had a bomb, that they were following his wishes.

"Through a very successful implementation by our pilot and crew, the plane was landed in Istanbul instead of Sochi," Istanbul governor Huseyin Avni Mutlu told reporters at the airport. "He thought it was going to Sochi but after a while he realized that (the plane) was in Istanbul."


He said the suspected hijacker was arrested after a stand-off during which a negotiator convinced him to first allow women and children to be evacuated and later agreed to let all other passengers off the plane as well.

"Our security units sneaked through various entrances during the evacuation of the passengers and with a quick and effective intervention the hijacker was subdued," Mutlu said. No bomb was found, he said.

The man's motive was unclear, but Mutlu said he had "requests concerning his own country" and wanted to relay a "message concerning sporting activities in Sochi." Mutlu said there was no immediate indication that the man was a member of any terror organization and Mutlu did not give his name.

"We were receiving through various channels information that there could be initiatives to sabotage the spirit of peace arising in Sochi, but we are saddened that such an event took place in our city," Mutlu said.

The governor said the man was being held at Istanbul police headquarters. The man was slightly injured during the struggle when he was detained, but no weapons were used, he said. The private Dogan news agency said later that the man was taken to a hospital for his injuries.

The Interfax news agency cited the Ukrainian Security Service, the country's main security agency, as saying the passenger was in a state of severe alcohol intoxication. Mutlu said the man was not drunk, but said he may have taken substances to help him remain alert. He did not elaborate.

Habib Soluk, the Turkish Transport Ministry undersecretary, told NTV earlier that the man rose from his seat, shouted that there was bomb on board and tried to enter the locked cockpit. The pilot signaled that there was a hijack attempt and the airport was placed on high alert.

Air traffic at Sabiha Gokcen was halted throughout the incident but had returned to normal after the man's arrest.

"We had so much adrenaline in our veins that we could not grasp much," Konstantin Ernst said through an interpreter.

With about 100,000 police, security agents and army troops flooding Sochi, Russia has pledged to ensure "the safest Olympics in history." But terror fears fueled by recent suicide bombings have left athletes, spectators and officials worldwide jittery about potential threats.

"It would be wrong to make any comment before all the facts are known but any security questions are of course a matter for the authorities," International Olympic Committee spokesman Mark Adams said.

Security experts warn that Islamic militants in the Caucasus, who have threatened to derail the Winter Games that run from Feb. 7-23, could achieve their goal by choosing soft targets away from the Olympic sites or even outside Sochi.

Olympic organizers introduced blanket screening of all visitors, requiring them to share passport details to get a Winter Games spectator pass. Officials also cut access to vehicles lacking Sochi registration or a special pass, and guards were searching all train commuters.


The U.S. Department of Homeland Security warned that terrorists may try to smuggle explosives into Russia in toothpaste tubes. Yet some air travelers heading to Sochi have defied a temporary Russian ban on all liquids in carry-on luggage, and brought toothpaste and other toiletries on board unnoticed.

The U.S. Transportation Security Administration announced Thursday that it, too, is banning all liquids, gels, aerosols and powders from carry-on luggage on flights to Russia.

And CBS News Senior National Security Analyst Juan Zarate says there's a chance the ban on liquids could be extended -- and expanded.

"If the threat exists now and if we are worried that terrorist groups out of Russia and perhaps elsewhere are thinking about these techniques to evade security and the current restrictions and protections on airplanes," he said Friday on the CBS News broadcast "Up to the Minute," then they're going to have to think about whether to extend them beyond the Olympics and certainly consider whether or not it applies to U.S. domestic travel. So that's going to be a big issue, because terrorists are trying to target airplanes. That continues."