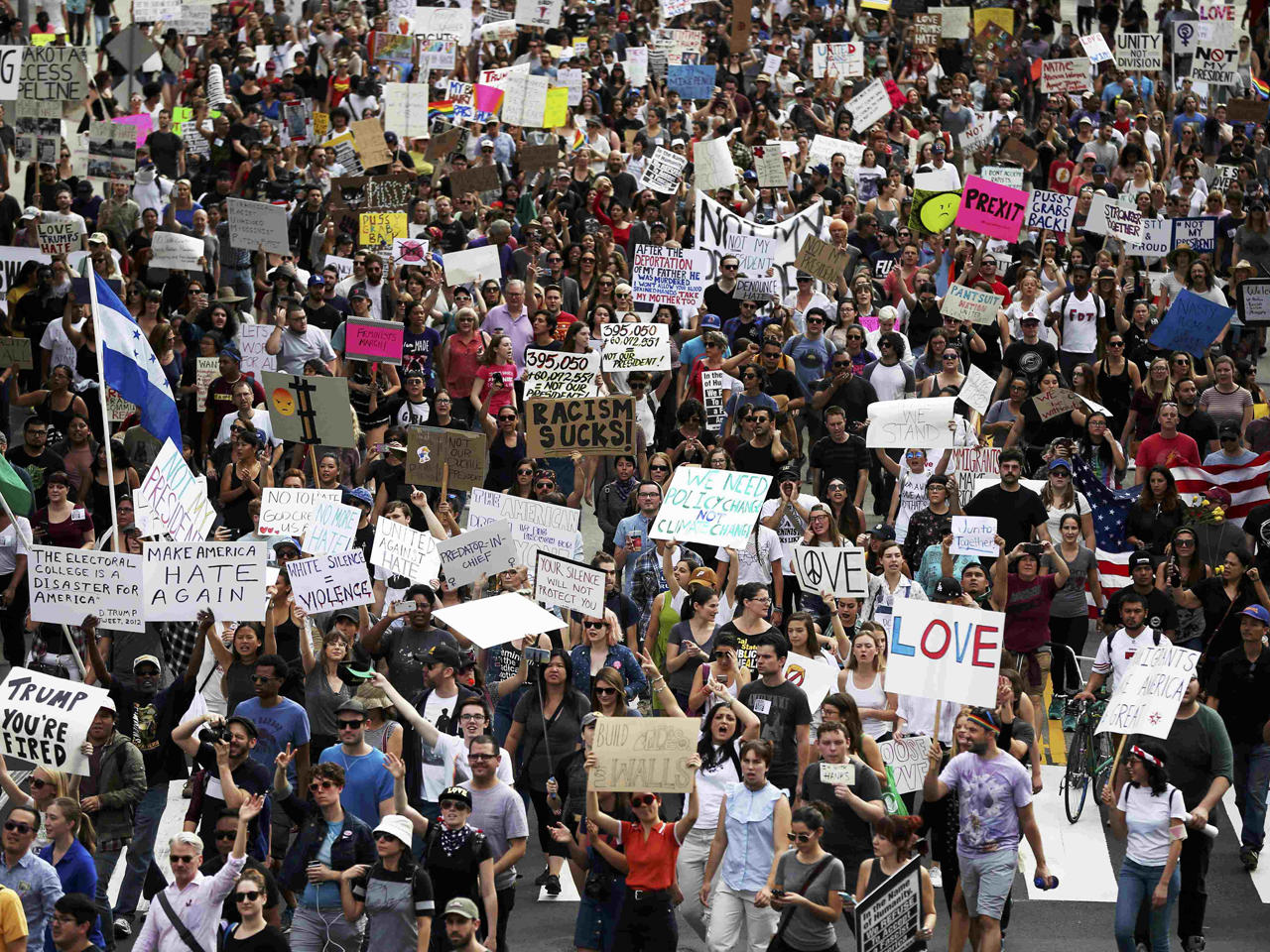 For many survivors of sexual assault, this presidential campaign felt nothing short of traumatic. Donald Trump’s remarks about women’s bodies, sexist comments, and the 2005 “Access Hollywood” video, unearthed in October, in which he openly brags about grabbing and groping women, triggered many to relive their own painful experiences.

“You know I’m automatically attracted to beautiful — I just start kissing them,” Trump said in the video, which dominated TV screens and Twitter and Facebook feeds for weeks. “... And when you’re a star, they let you do it. You can do anything. Grab them by the p****. You can do anything.”

His boasts about using women with impunity (just “locker room talk,” he later claimed) led more than a dozen women to come forward and publicly accuse him  of various forms of sexual assault. He denied the accusations, calling his accusers liars and threatening to sue them after the election.

Then the election results came in, and Donald Trump became the president-elect.

For some women, the shock, fear, and wrenching anxiety they felt in the wake of his victory went far beyond the typical disappointment of being on the losing side.

“If you want to understand why rape culture is alive in the USA, it’s because Trump can admit to sexual assault & still get millions of votes,” tweeted another.

Experts told CBS News how this series of events could trigger powerful emotions in many sexual assault survivors.

“It’s so personally devastating to hear a man bragging about any sort of sexual conquest,” said Elaine Ducharme, Ph.D., a clinical psychologist from Connecticut who has specialized in treating victims of trauma for over 20 years. “It plays into that feeling for women that we’re just objects.”

Sue Varma, M.D., a clinical assistant professor of psychiatry at NYU Langone Medical Center, explained that for some survivors, Trump’s words brought on post-traumatic stress disorder, leaving them with “feelings of invalidation, similar to how they originally felt when victimized.” Some of the original symptoms they experienced – either avoidance or re-experiencing the event in flashbacks – may reoccur, she explained.

What’s more, she says victims may now be deterred from either speaking out or taking legal action against their attackers for fear that they will not be believed, a stigma already prevalent – but nonetheless exacerbated – by Trump’s campaign and subsequent victory.

“People will feel greater sense of shame, less likely to come forward, and feel belittled and invalidated,” Varma said. “We look at the president as leader, as an example. This can feel threatening.”

Experts also point out that Trump’s words and actions may send a message of “normalization” when it comes to sexual harassment and assault.

“Many women, not just survivors of sexual abuse, were and continue to be outraged by Trump’s behavior,” said Ducharme. “They also worry that this sends a signal to other men that this is acceptable behavior and women just have to take it. This is why it is so important we help individuals learn skills to speak up and join together in this ongoing struggle about sexual assaults of women.”

Amy Edelstein, MSW, supervising social worker at Safe Horizon, a New York City-based organization that provides support for victims of crime and abuse, said her program has seen an increase in survivors reaching out who stated that they were influenced by the stories of sexual assault they saw play out during the campaign.

Other organizations and rape crisis hotlines have reported similar spikes.

Sofie Karasek, director of education and co-founder of End Rape on Campus (EROC), a privately-funded organization, expressed concern that many vital resources for victims of sexual assault could be cut under a Trump administration.

“Rape crisis centers have historically been under-funded,” she told CBS News. “It is certainly a fear of ours that funding would be cut back even further, which would really deny an important remedy to survivors. There are already so few options that it would really be disastrous if further resources were cut for people who have been raped, but that is a reality that might come to fruition.”

As a result, advocacy organizations say their work is now more important than ever.

“We live in a culture where sexual violence is prevalent and where it’s normalized and excused in the media and pop culture. This brings further duty for us to spread awareness and to stop sexual violence while empowering survivors so they can feel that they can decide how they want to handle it for themselves, that they feel in control of it,” Edelstein said.

In an open letter, EROC assured those affected that “We are here for you, and we aren’t going anywhere.”

“We are committed to ending sexual violence and supporting survivors,” the letter reads. “We will continue to hold institutions accountable for addressing civil rights violations and treating survivors with dignity. We will continue to center the voices of those disproportionately affected by violence, who remain silenced and marginalized in our society.”

For survivors of sexual assault, experts offered some advice to help them cope with both the immediate aftermath of the election and the many struggles it may lead to in the days, months, and years to come.

If someone close to you has been sexually assaulted, Karasek offers some guidance on how to help them through difficult times. “Ask that person what they need to feel supported and give that person who’s been affected that agency to decide that themselves,” she said. “Asking them if they want to talk about what they’re feeling, but not pressuring them to do that if that’s not what they want to do. And as a friend, reminding them of the many hotlines and resources available to them if they’re feeling like they need that kind of support.”