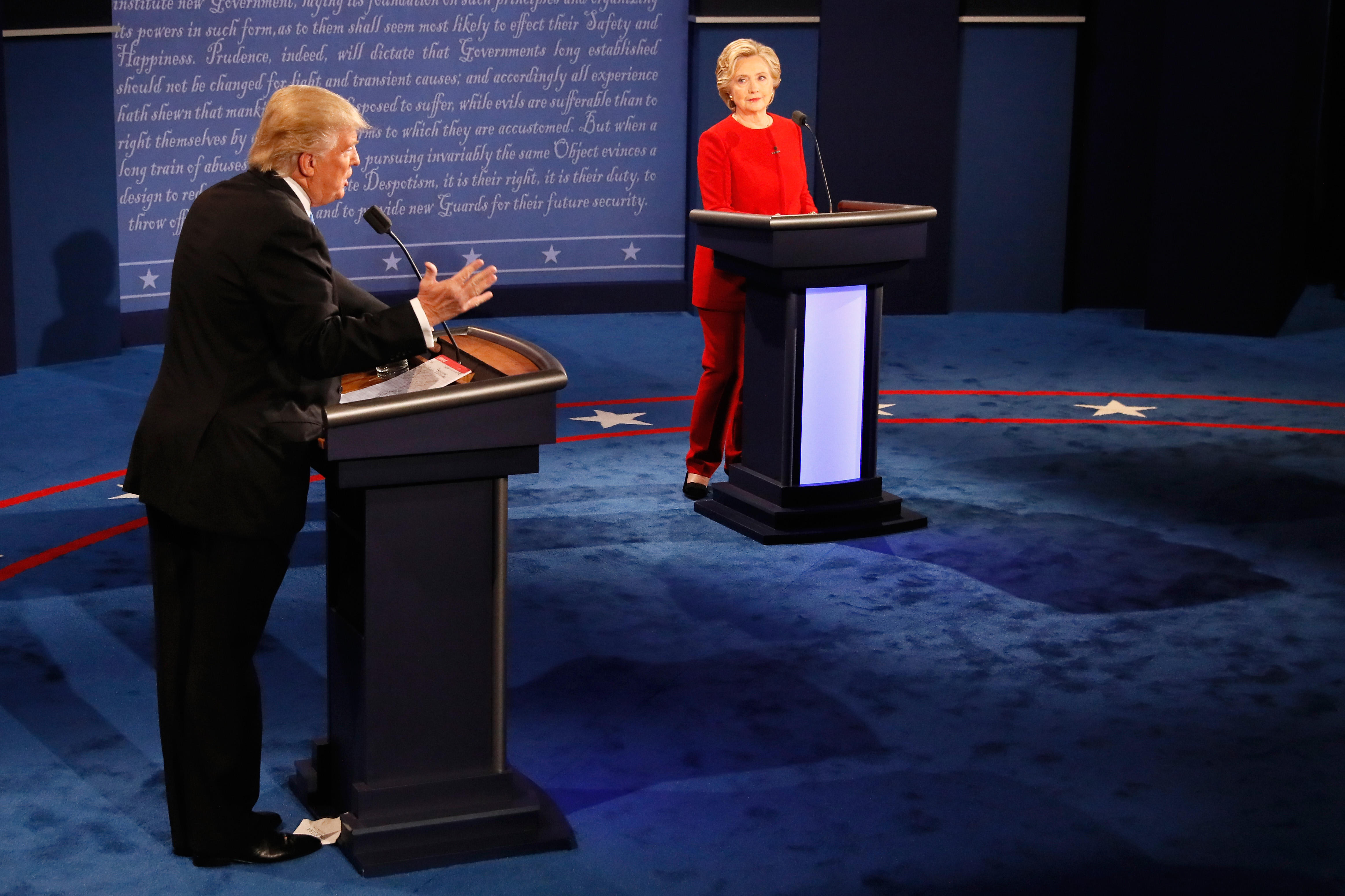 “Why doesn’t he just say that she needs more testosterone?” said Bennett, a 69-year-old independent from the Philadelphia suburbs who plans to vote for Clinton in November.

Across the country, Lisa Lowe, a Colorado Democrat who was lukewarm about Clinton before Monday’s debate, said Trump behaved like a “negative bully.” Kris Stotler, an undecided Virginia Republican, was disappointed by Trump’s jarring criticism of a former beauty queen’s weight, comments Clinton forcefully condemned during the faceoff​.

“It’s incredibly distasteful, and it doesn’t stop,” Stotler, 48, said of Trump. “Even if you thought that, why would you say that?”

Bennett, Lowe and Stotler were among two dozen female voters from battleground states who spoke with The Associated Press on Tuesday. Nearly all expressed concerns with Trump’s critical and often demeaning comments about women, as well as his approach toward Clinton in the debate.

The concerns were shared, too, by some women who plan to vote for Trump in November, though his supporters were more forgiving in their assessments.

“I think you’ll see a different comeback from him in the next debate,” said Carole Staats, a 60-year-old Republican from Lansdowne, Pennsylvania.

While Clinton has held a lead in preference polls among female voters throughout her general election contest with Trump, she aims to widen that margin as much as possible to offset her weakness with men. She also needs to urgently energize younger female voters, who have been more skeptical of the first woman nominated for the White House by a major U.S. political party.

After Monday’s debate, Clinton’s team believes it has all the ammunition it needs to rally women in the campaign’s closing weeks.

That’s due in part to strong execution by Clinton, who arrived at the debate armed with numerous past statements Trump has made about women. She was particularly assertive in calling him out​ for once labeling 1996 Miss Universe winner Alicia Machado “Miss Piggy” after she gained weight.

But Trump also did himself few favors. He interrupted Clinton repeatedly during the debate, at times leaning into his microphone to declare “wrong!” as she was talking. And he perplexingly stood by his criticism of Machado the morning after the debate, saying in an interview on Fox News Channel that Machado was one of the “worst we ever had” in the beauty contest he used to own.

Clinton’s campaign quickly lined up Machado for a conference call with reporters. The Venezuelan-born Machado, now a U.S. citizen, said she hoped her story would “open eyes” about Trump in the election.

Debby Bower, a 41-year-old Democrat who lives in the Denver suburbs, said Trump’s taunting of the former beauty queen was “painful to my soul.”

“It hurts my heart when I hear the hateful, spiteful language that Mr. Trump uses,” Bower said.

According to a recent Associated Press-GfK poll of registered voters, 64 percent of women have an unfavorable opinion of Trump, while 58 percent of men view the Republican nominee negatively. Women were also more likely than men to say they’d be afraid or angry if Trump is elected in November.

Among likely voters, Clinton leads Trump among women in overall support, 51 percent to 34 percent. That puts her behind the 55 percent of women President Barack Obama won in the 2012 election, according to exit polls - though Trump also trails the 44 percent of women Republican Mitt Romney carried in his losing effort that same year.

At times, Clinton has been reluctant to play up the historic nature of her candidacy or call out perceived sexism that can color how she is judged on the nation’s biggest political stage. But her campaign aides showed no such reluctance in the hours after the debate, moving swiftly to cast Trump’s aggressive posture toward Clinton in front of a massive television audience as no different from how women often find themselves treated by men.

“His constant interruption of her probably was reminiscent of the way a lot of women feel about bullies in their lives,” said John Podesta, Clinton’s campaign chairman. “I thought it was kind of unbecoming and he couldn’t stop himself.”

Victoria Widergren, a Republican from Chester Springs, Pennsylvania, agreed. The 46-year-old builder and architect was planning to vote for Trump, but changed her mind after Monday’s debate.

Widergren said she was particularly appalled to learn that the billionaire businessman hadn’t paid contractors who worked for him. But as the 90-minute debate stretched on, she, too, grew frustrated with Trump’s interruptions of Clinton, a view she said was shared by colleagues she’d spoken to after the debate.

“He just doesn’t understand when to stop,” she said.