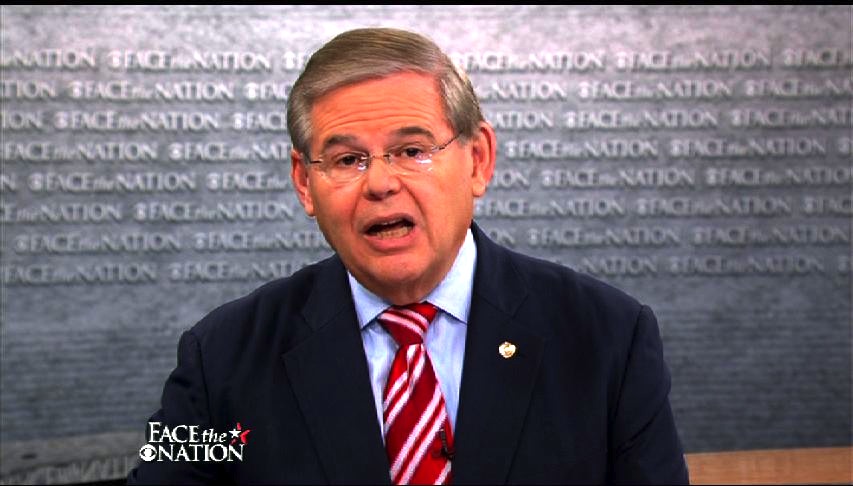 In a moment of bipartisan agreement, the Democratic and Republican leaders of the Senate Foreign Relations Committee expressed serious concerns about a deal to temporarily freeze and roll back Iran’s nuclear production for six months in exchange for limited sanctions relief.

“As one of the architects of the sanctions regime we've had on Iran, this is exactly the process that has brought Iran to the negotiating table,” Menendez said on CBS’ “Face the Nation” Sunday, elaborating on his comments. He said putting sanctions in place six months after the enactment of the deal would create “flexibility for diplomacy” and send the message to Iran “that there is a consequence” for failing to reach a longer-term deal to end their nuclear weapons ambitions.

“Creating a sanctions regime that is an insurance policy and also creates leverage for us is incredibly important,” Menendez said. Among his concerns with the deal are a failure to define what a “mutually-agreeable enrichment program” is, and softening from with the U.N. Security Council Resolutions that call on Iran to cease its enrichment entirely.

“Those are real concerns,” Menendez said. “I hope the deal can be successfully. Obviously, diplomacy is something we want to see work. But we need to be ready to move forward.”

The top ranking Republican member on the committee, Sen. Bob Corker, R-Tenn., discussed his own concerns about the deal, including the fact that it does not require Iran to dismantle any centrifuges in the next six months.

“I'm very concerned, especially with this interim deal, how we get to a place where Iran is not enriching constantly or where they're right on the verge, always, of being able to break out and create a nuclear weapon. I have strong concerns about the proliferation that's going to occur in the area,” he said.

Allowing Iran to continue enriching uranium “really throws into disarray” other nuclear agreements the U.S. is negotiating around the world, Corker said, adding “That is something that cannot exist.”

Corker said that he and Menendez will be working on a Congressional response to the deal, but that it will be up to Senate Majority Leader Harry Reid, D-Nev., to decide whether it goes anywhere. Reid has said Congress will be looking at whether the deal is a “good enough first step.”

But it’s clear many lawmakers are frustrated.

“This is a total victory from their standpoint,” Corker said in reference to Iran. “I think they're going to be good actors over the next six months. Because they see an administration who led this negotiation, an administration that has already given tilt to allowing them to do the things that the world community, through the U.N. Security Council, has already said they cannot do. So I'm very discouraged.”

Full transcript of "Face the Nation" on April 18, 2021
Rebecca Kaplan