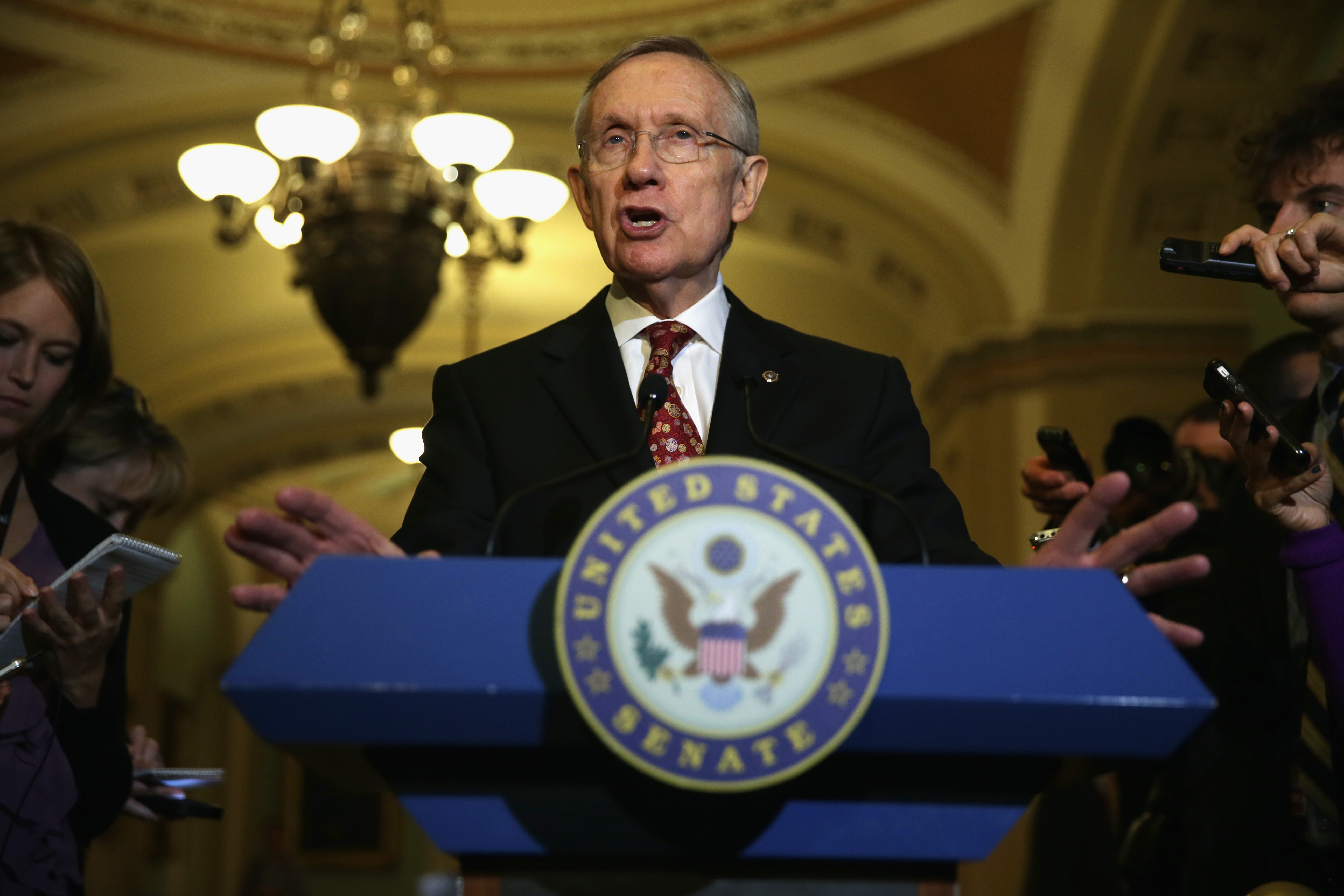 The leaders of the House and Senate are divided how a deal to freeze Iran's nuclear program for six months will play out, though the top men in both chambers have largely refrained from taking a firm position on the recent negotiations.

Speaking about the deal for the first time Monday morning, Senate Majority Leader Harry Reid, D-Nev., called the deal - which will freeze and roll back Iran's nuclear production for six months in exchange for limited sanctions relief while a longer-term agreement is negotiated -- "an important first step."

"If it's a good enough first step, we'll take a look at that," he told WAMU radio's Diane Rehm.

Reid said before the Thanksgiving recess that he would move ahead with and support a bill when lawmakers returned to broaden the scope of petroleum sanctions, limit trade with the Iranians and pursue those who divert goods to Iraq. But on Monday, he said the Senate will "take a look at [the deal] to see if we need stronger sanctions."

He added that Sens. Tim Johnson, D-S.D., and Bob Menendez, D-N.J., the chairmen of the Senate Banking and Foreign Relations Committees, respectively, will study the deal and hold hearings after the recess. "If we need stronger sanctions, I'm sure we will do that," he said. Reid also indicated he has spoken recently with Israeli Prime Minister Benjamin Netanyahu, who has expressed deep concern about the deal and called it a "historic mistake."

House Speaker John Boehner, R-Ohio, similarly refrained from either strong criticism or praise of the deal between the U.S., France, Germany, Britain, China, Russia and Iran.

"The interim deal has been and will continue to be met with healthy skepticism and hard questions, not just of the Iranians, but of ourselves and our allies involved in the negotiations," Boehner said in a statement Sunday. "The Administration and its negotiating partners claim that a final deal can be completed that affirms Iran does not have a right to enrich and permanently and irreversibly dismantles the infrastructure of its uranium and plutonium nuclear programs. That is a goal the House shares. The lingering question, however, is whether the negotiating partners will work equally hard to preserve the strong international sanctions regime until that goal is achieved."

Boehner added that the House looked forward to a briefing from the administration and discussing "next steps."

But both men are at odds with some of their top lieutenants who were quick to bash the deal as granting excessive concessions to the Iranians and dangerous for the U.S.

"It is a deal which brings Iran closer to becoming a nuclear power," House Majority Leader Rep. Eric Cantor, R-Va., said Monday on "CBS This Morning."

"We want that power in that country to dismantle, irreversibly dismantle, it's nuclear stock piles and not be allowed to continue enrichment," he said. "I feel that this deal falls short on all those fronts and I think it bodes very, very ominously for the region and in fact, U.S. security"

Sen. Chuck Schumer, D-N.Y., the number three Democrat in the Senate panned the deal as trading a disproportionate amount of sanctions relief for insufficient rollback of the Iranian nuclear program.

The "disproportionality of this agreement makes it more likely that Democrats and Republicans will join together and pass additional sanctions when we return in December," Schumer said in a statement. "I intend to discuss that possibility with my colleagues."

House Minority Leader Nancy Pelosi, D-Calif., was one of the few lawmakers to offer praise for the deal, calling it "an essential step toward meeting our ultimate objective: to prevent Iran from obtaining a nuclear weapon."

"President Obama, Secretary Kerry, their team, and our allies are to be commended for their successful efforts to hash out a deal that advances national, regional, and global security," Pelosi said, while promising that the U.S. would quickly reimpose, deepen and expand sanctions if Iran did not hold up its end of the bargain.

That he is not facing unified criticism from Congress is a good thing for Mr. Obama, who asked legislators to back the deal by refraining from imposing additional sanctions in the coming months.

"Now is not the time to move forward on new sanctions, because doing so would derail this promising first step, alienate us from our allies and risk unraveling the coalition that enabled our sanctions to be enforced in the first place," he said after the deal was announced Saturday night.

But even with congressional leaders not jumping to conclusions on the deal, he'll still face a wave of negative reactions from lawmakers, and the threat of additional sanctions, when they return in December.