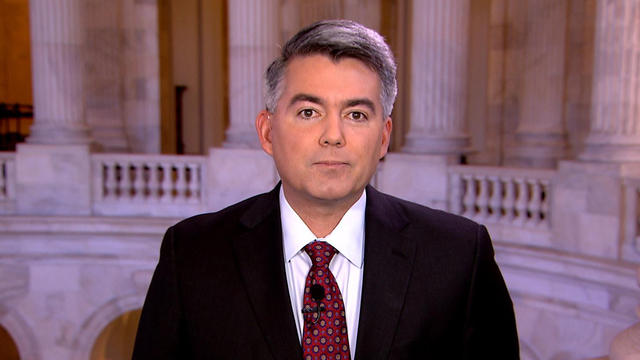 Sen. Cory Gardner, R-Colorado, says he's skeptical of the apparent willingness of the North Koreans to participate in a dialogue with the United States amid ongoing pressure for the regime to halt its nuclear weapons program. Gardner told "CBS This Morning" that while many are optimistic of the renewed talks, it's important to note "we've also been here before."

"Certainly it's positive but we have to take this sign, this gesture to talk, not only with a grain of salt but with perhaps an entire salt block," said Gardner.

Gardner said the U.S. has made mistakes in the past when it came to North Korean's leaders' promises of denuclearization. He said while the possible negotiations are a "positive development," questions still remain if the regime will indeed lead to concrete results.

While South Korea said Tuesday that North Korea had agreed to impose a moratorium on tests of nuclear weapons and missiles if it holds talks with the United States, Gardner said that "doesn't mean they'll halt their progress."

"They've reached the stage in their nuclear program where sure, they can say we're not going to test, but in the meantime they continue to develop supply lines, develop new technologies, testing through computer models, it doesn't mean they give up or completely halt their nuclear program, that's a big difference," said Gardner.

He added, "I'm skeptical, this is a good thing, but we have to make sure that we're not fooled."

Gardner noted the new sense of openness on behalf of the North is a result of significant sanctions from the U.S. and allies around the world. He urged the Trump administration, however, to continue to take every action possible in applying "maximum pressure" on the North.

"In the past, the United States has lived up to our end of the bargain where we've entered into promises or agreements with North Korea only to see the North Koreans break their end of the bargain so what this administration needs to continue to do is apply maximum pressure as it has, continue to engage China and other countries around the world to enforce stricter standards and stricter sanctions," he said.

Are there animal care problems at National Zoo?
Emily Tillett