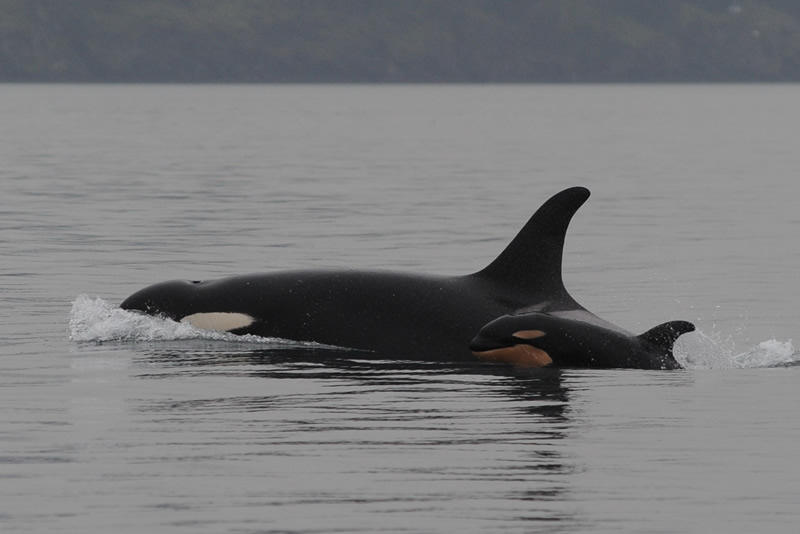 There appears to be a bit of a baby boom taking place in the Pacific Northwest.

For the second time in three months, scientists have spotted a new baby orca born to a group of endangered killer whales that frequent the Salish Sea, which stretches from Puget Sound to Canadian waters. Designated J-51, since it's part of what is called J-pod, the calf was spotted this week being flanked protectively by two adult whales, J-19, the presumed mother, and J-41. The calf's gender isn't known.

The baby orca will have a playmate. Another calf, J-50, was born in December.

"We are very excited and thankful because we had gone several years without new calfs," said Susan Berta, co-founded of the Orca Network, who works closely with the Center for Whale Research which first announced the new addition.

But Berta warned these promising signs for the J-pod population come as the two other pods in the southern orca population, known as K and L, have seen their numbers decline. The two new babies brings to 79 the total population, which is still dangerously low.

"The scary thing is that most of the mating is across pods," she said. "We really need all three pods to keep the entire population viable over a longer period of time."

The whales, which are an endangered species in the United States and Canada, spend time in the inland waters of Washington state and Canada. The Puget Sound population is in danger due to a limited supply of their favorite food, chinook salmon. That also contributes to the fact that only 35 percent to 45 percent of orcas die in their first year.

It had been 2 1/2 years since the last successful birth in the population. That's why the death of a pregnant 19-year-old killer whale, J-32, in early December in British Columbia waters was met with such dread. The fetus had died, and a resulting bacterial infection killed the mother, Fisheries and Oceans Canada said.

Killer whales are 7 to 8 feet in length at birth and weigh about 400 pounds, according to the Center for Whale Research. They are born after a 17-month gestation and nurse for at least a year.