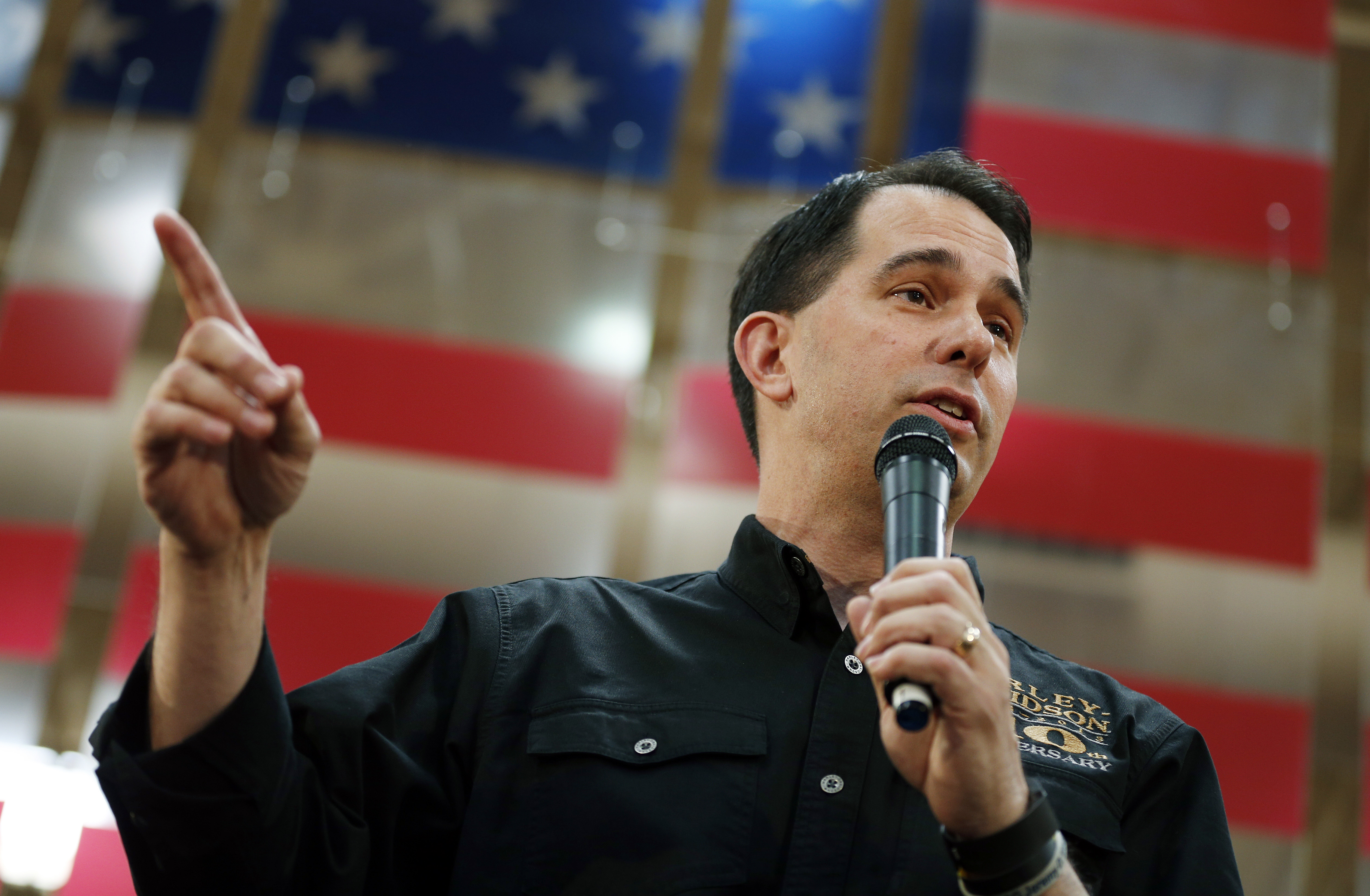 This article originally appeared in Slate.

MAULDIN, South Carolina--Scott Walker is running as the iron man conservative. He doesn't just say conservative things, he has the endurance to back them up under pressure. "He doesn't just talk the talk, he walks the walk," says Larry Baker at Mutt's BBQ joint, where Walker was wrapping up a one-day visit to South Carolina on Wednesday. He's referring, of course, to Walker's battle against the unions. This is perhaps the most oft-quoted line from voters at Walker's rallies.

Fate and weather conspired to put the Wisconsin governor's grit front and center. After announcing his candidacy in Waukesha, Wisconsin, on Monday night, Walker woke up at 4 a.m. and headed to Nevada. From there he flew east to South Carolina. Thunderstorms forced his plane to reroute to Memphis, Tennessee. There he waited to be rerouted to Atlanta. Unfortunately, Walker and his family arrived three minutes late for their connecting flight to South Carolina. So they rented cars and drove, arriving in time for Walker's early morning visit in Charleston, South Carolina, to a Harley store. By the time his last event of his daylong South Carolina trip was over, he had been up 36 hours. (Unlike the rest of us, he somehow resisted the urge to chronicle his travel woes on Twitter.)

He should have been a baggy, pasty mess. When candidates get tired, their stump speeches lose their connective tissue. They mix up Iran and Iraq. They forget what state they're in. They snap at their staff. Walker didn't do any of these things.

Walker is like a local musician who plays a solid version of the old standards.

His stump speech at the end of the day was almost identical to the one he gave at the start of the day (when he'd already been up for 24 hours). Walker memorized his 30 minute announcement speech Monday night, according to his staff, giving an address that almost exactly matched the pre-released printed copy. The stump speech also seems to have been committed to memory. Even the mannerisms, gestures, and jokes feel like they're traveling a well-worn groove.

When Walker speaks it isn't a jazz performance with improvisation and solo flourishes. He doesn't tell any heartbreaking stories or dramatic tales. He doesn't rumble like Gov. Chris Christie or seek to soar like Sen. Marco Rubio. He doesn't have the obvious practiced approach of Sen. Ted Cruz.

But that doesn't mean he bores his crowds. Walker is like a local musician who plays a solid version of the old standards. People get up and dance not because he is a virtuoso, but because they like the tunes. "What a Wonderful World" is our wedding song!

Walker received loud applause more than a dozen times from his overflow crowds in upstate South Carolina. Audiences aren't brought to a crescendo release through oratory, they respond because they seem primed. He presses the buttons--opposition to Common Core, support for voter ID, drug testing for welfare recipients, repealing Obamacare, defunding Planned Parenthood, standing up to Vladimir Putin, and no immigration amnesty--and the crowd responds with big applause. (He doesn't mention same-sex marriage.)

Walker's challenges on Wednesday's whirlwind of campaigning came from his comments the day before about the Boy Scouts, where he seemed to suggest the decision to allow gay scout masters would make the boys unsafe. "I have had a lifelong commitment to the scouts and support the previous membership policy because it protected children and advanced scout values," he said. Conservative blogger Jennifer Rubin criticized Walker for gay bashing. In Lexington, South Carolina, on Wednesday morning, he clarified his remarks. "The protection was not a physical protection," he said, but rather about "protecting them from being involved in the very thing you're talking about right now, the political and media discussion about it, instead of just focusing on what scouts is about, which is about camping and citizenship and things of that nature."

It's not a stunning political achievement for a politician to whip up an eager crowd. People willing to stand in the heat in the middle of the day arrive at the event ready to clap. One man was so eager that he stood for parts of Walker's speech with his hands poised to clap, which gave him the appearance of a wide receiver waiting to be thrown the ball. Still, the response Walker has conjured rivals any I've seen the other candidates receive this season and far surpasses the ones I've seen for Jeb Bush and Christie. And they almost certainly had gotten far more sleep than the man from Wisconsin.