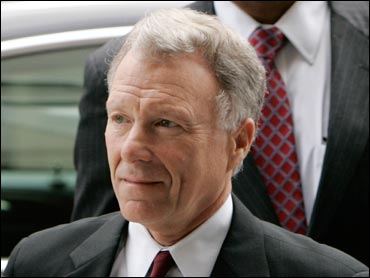 President Trump has been advised to approve the pardon I. Lewis "Scooter" Libby. CBS News' Major Garrett reports Trump agrees with the recommendation. Libby was former Vice President Dick Cheney's chief of staff who was convicted of perjury in relation to the 2003 leak of CIA agent Valerie Plame's identity.

Although former President George W. Bush commuted Libby's sentence in 2008, and Libby was spared jail time, the conviction remained on his record, and he had to pay a substantial fine. His case became a cause celebre for many conservatives who feel he was unfairly targeted by the special prosecutor, Patrick Fitzgerald. In 2010, Mr. Bush said Cheney was angry at his decision not to pardon Libby.

"Scooter is a loyal American who worked for Vice President Cheney who got caught up in this Valerie Plame case and was indicted and convicted," Mr. Bush told NBC News in 2010. "It was the last decision of the presidency, really. I chose to let the jury verdict stand after some serious deliberation, and the vice president was angry."

Kellyanne Conway, senior adviser to the president, wouldn't confirm the pardon on Friday, but told reporters, "many people think Scooter Libby was the victim of a special counsel run amuck."

The process to pardon Libby began when Reince Priebus was chief of staff, but it was stalled in the White House counsel's office. It was revived recently by former U.S. attorney Joseph diGenova, who assists Mr. Trump's legal team but did not formally join it, and his wife and law partner Victoria Toensing.

DiGenova has long argued for a pardon and has accused former FBI director James Comey of misconduct in Fitzgerald's investigation of Libby. When Libby's law license was restored in Nov. 2016, the Daily Caller reported that diGenova made accusations against Fitzgerald and Comey. "False testimony was coerced by Jim Comey's friend Patrick Fitzgerald, and Comey was part of the team to destroy the vice president of the United States, and it didn't happen."

If the president officially pardons Libby soon, it could coincide with the release of Comey's tell-all book. In the book, Comey blasts Mr. Trump as unethical and "untethered to truth" and calls his leadership of the country "ego driven and about personal loyalty."