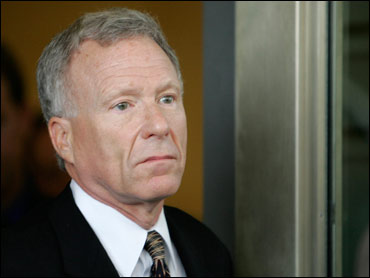 Former White House aide I. Lewis "Scooter" Libby was sentenced to 2 1/2 years in prison Tuesday for lying and obstructing the CIA leak investigation.

Defense lawyer Ted Wells cited what he called Libby's "exceptional public service to our nation" that, he argued, "justifies a sentence of probation."

But U.S. District Judge Reggie B. Walton, known as "long ball" for his harsh judgments, was unmoved, sentencing Libby to 30 months in prison and a $250,000 fine, adds Orr.

"People who occupy these types of positions, where they have the welfare and security of nation in their hands, have a special obligation to not do anything that might create a problem," Walton said.

Walton did not set a prison date for Libby, the former chief of staff to Vice President Dick Cheney. Though he saw no reason to let Libby remain free pending appeal, Walton said he would accept written arguments on the issue and rule later.

Cheney, who said he was "saddened" by the verdict, described Libby in a statement as a man "of the highest intellect, judgment and personal integrity — a man fully committed to protecting the vital security interests of the United States and its citizens."

President Bush, in Europe for the G-8 Summit, said he felt "terrible" for Libby's family, but does not intend to intervene now in his case.

The U.S. Bureau of Prisons will decide where Libby serves his sentence and set a reporting date. The agency tries to place prisoners close to home whenever possible.

Libby was convicted in March of lying and obstructing an investigation into the 2003 leak of CIA operative Valerie Plame's identity.

The highest-ranking White House official convicted in a government scandal since the Iran-Contra affair, Libby has steadfastly maintained his innocence.

"It is respectfully my hope that the court will consider, along with the jury verdict, my whole life," Libby said in brief remarks to the judge. He also thanked the judge and the court's personnel for the "consideration and courtesies" over the past year and a half. Libby told the judge that he realized "fully that the court must decide on punishment," reports CBSNews.com's Jennifer Hoar, after which Judge Walton paused introspectively.

Sitting with Libby's wife, Harriet Grant, during the sentencing were conservative commentators Mary Matalin, a former Cheney aide, and Victoria Toensing, a former deputy assistant attorney general during the Reagan administration. During a 10-minute recess after the sentence was read, Grant was tearful as she hugged several people around the defense table, Hoar reports.

"The sentence and fine were at the high end of the range of options here for Judge Walton, but it's really no surprise given the judge's reputation for tough sentences and his view of Libby's conduct," CBS News legal analyst Andrew Cohen said.

"Libby's lawyers have said that they will appeal his conviction, and now his 2 1/2-year-long sentence, and that probably won't be resolved by a federal appeals court until well into next year. To me, that increases the chances of a presidential pardon, especially if Libby, as expected, loses his appeal," Cohen said.

With letters of support from several former military commanders and White House and State Department officials, Libby asked for no jail time. His supporters cited a government career in which Libby helped win the Cold War and the first Gulf War.

"He has fallen from public grace," defense attorney Theodore Wells said. "It is a tragic fall, a tragic fall." Unlike in his bombastic closing arguments during the Libby trial, Wells spoke gently, almost cautiously, as he asked that his client be spared incarceration, Hoar says.

Libby's attorneys sought no jail time. They argued that it was unfair to increase the sentence simply because of the nature of the investigation, particularly because Fitzgerald never proved the leak was a crime.

"No one was ever charged. Nobody ever pleaded guilty," attorney William Jeffress said. "The government did not establish the existence of an offense."

"My hope and prayer is that his outstanding record, his many contributions to our country and his value as a citizen, will be considered carefully," Rumsfeld wrote.

"He pursued his objectives with integrity and a sense of responsibility," Kissinger said. "I would never have associated the actions for which he was convicted with his character."

However, not all the letters were supportive of Libby. One message expressed anger over the lack of punishment for Cheney and White House political adviser Karl Rove: "(Libby) was the puppet, but they pulled the strings."

Another letter stated, "When we average Americans tell our children about things like this, we need to be able to impress upon them that the law should apply to all ... even the rich, powerful and connected."

Probation officers had recommend a sentencing range of 15 to 21 months, but left open the possibility that defense attorneys could argue for less.

Libby was convicted of one count of obstruction of justice, two counts of perjury to the grand jury and one count of lying to the FBI about how he learned Plame's identity and whom he told. The verdict came after a seven-week trial that focused new attention on the Bush administration's much-criticized handling of intelligence reports about weapons of mass destruction in the run-up to the Iraq war.

In the end, jurors said they did not believe Libby's main defense: that he hadn't lied but merely had a bad memory.

Their decisions made Libby the highest-ranking White House official convicted in a government scandal since National Security Adviser John Poindexter in the Iran-Contra affair two decades ago.

Walton put the sentence on hold until he could hear legal analysis from probation officials about the way the sentence was structured technically. Walton said he would make the sentence official next week.

The case cost Cheney his most trusted adviser, and the trial revealed Cheney's personal obsession with criticism of the war's justification.

It was Cheney who first revealed Plame's identity to Libby in June 2003 after her husband, former Ambassador Joseph Wilson, began questioning the administration's prewar intelligence. Several other officials testified that they, too, discussed the CIA operative with Libby as Wilson's criticism mounted.

Libby says he forgot those conversations and was surprised to learn about Plame a month later from NBC newsman Tim Russert. Russert, the government's star witness at trial, testified the two men never discussed Plame. Fitzgerald said Libby concocted the Russert story to shield him from prosecution for improperly handling classified information.

Libby was not charged with leaking Plame's identity, nor were the two initial sources of the leak — Rove and Deputy Secretary of State Richard Armitage.

Libby's supporters criticized Fitzgerald for pushing ahead with the investigation despite knowing the source of the leak early on. Fitzgerald said he needed to know whether the leak was authorized by senior government officials and spoke in court about "a cloud" over Cheney.

Though the trial is over, the legal fight over the leak continues. Plame and Wilson are suing Libby, Cheney and other senior Bush administration officials for violating their privacy rights. A judge is considering whether to dismiss the lawsuit.

Plame is also suing the CIA for allegedly holding up publication of her memoir, in which she wants to discuss details about her 20-year career at the intelligence agency. CIA officials say the material she wants to publish is classified.