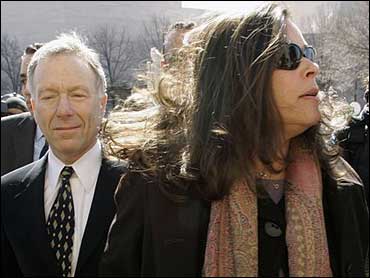 Vice President Dick Cheney's former chief of staff, I. Lewis "Scooter" Libby, was convicted Tuesday of lying and obstructing an investigation into the leak of a CIA operative's identity.

Libby is the highest-ranking White House official to be convicted of a felony since the Iran-Contra scandal of the mid-1980s. The conviction focused renewed attention on the Bush administration's much-criticized handling of weapons of mass destruction intelligence in the run-up to the Iraq war.

The verdict culminated a nearly four-year investigation into how CIA official Valerie Plame's name was leaked to reporters in 2003. The trial revealed how top members of the Bush administration were eager to discredit Plame's husband, former Ambassador Joseph Wilson, who accused the administration of doctoring prewar intelligence on Iraq.

Libby, who was once Cheney's most trusted adviser and an assistant to Mr. Bush, was expressionless as the jury verdict was announced on the 10th day of deliberations. His wife choked out a sob and sank her head.

"I am very disappointed with the verdict," Vice President Cheney said in a written statement. "I am saddened for Scooter and his family. As I have said before, Scooter has served our nation tirelessly and with great distinction through many years of public service."

He faces up to 30 years in prison when he is sentenced June 5, but under federal sentencing guidelines is likely to face far less. Defense attorneys immediately promised to ask for a new trial or appeal the conviction.

"We have every confidence Mr. Libby ultimately will be vindicated," defense attorney Theodore Wells told a throng of reporters. "We believe Mr. Libby is totally innocent and that he didn't do anything wrong."

Libby did not speak to reporters.

Special Prosecutor Patrick Fitzgerald, who has led the leak investigation, said no additional charges would be filed. That means nobody will be charged with the leak and Libby, who was not the source for the original column outing Plame, will be the only one to face trial.

"The results are actually sad," Fitzgerald said. "It's sad that we had a situation where a high-level official person who worked in the office of the vice president obstructed justice and lied under oath. We wish that it had not happened, but it did."

In fall 2005, late "60 Minutes" correspondent Ed Bradley reported on the harm Valerie Plame's outing had done to her and the CIA.

The verdict is a political blow to the administration, reports CBS News White House correspondent Mark Knoller, and so great was the interest in the outcome of the trial that President Bush watched live reports of it on TV in the Oval Office.

A spokeswoman said Mr. Bush accepted the jury's verdict and was saddened for Libby and his family — but because it's still an ongoing criminal proceeding the White House declined further comment.

Democrats reacted quickly to the verdict.

"I welcome the jury's verdict," said Senate Majority Leader Harry Reid in a statement. "It's about time someone in the Bush administration has been held accountable for the campaign to manipulate intelligence and discredit war critics."

Reid called on President Bush to pledge "not to pardon Libby for his criminal conduct."

Libby was convicted of one count of obstruction, two counts of perjury and one count of lying to the FBI about how he learned Plame's identity and whom he told. Prosecutors said he learned about Plame from Cheney and others, discussed her name with reporters and, fearing prosecution, made up a story to make those discussions seem innocuous.

Libby said he told investigators his honest recollections and blamed any misstatements on a faulty memory. He was acquitted of one count of lying to the FBI about his conversation with Time magazine reporter Matthew Cooper.

One juror who spoke to reporters outside court said the jury had 34 poster-size pages filled with information they distilled from the trial testimony. They discerned that Libby was told about Plame at least nine times and they didn't buy the argument that he forgot all about it.

Collins, a former Washington Post reporter, said jurors wanted to hear from others involved in the case, including Bush political adviser Karl Rove, who was one of two sources for the original leak. Defense attorneys originally said both Libby and Cheney would be witnesses and Rove was on the potential witness list.

"I will say there was a tremendous amount of sympathy for Mr. Libby on the jury. It was said a number of times, 'What are we doing with this guy here? Where's Rove? Where are these other guys?'" Collins said. "I'm not saying we didn't think Mr. Libby was guilty of the things we found him guilty of. It seemed like he was, as Mr. Wells put it, he was the fall guy."

"Even if jurors had become sympathetic to him during the trial — an unlikely scenario, especially after he decided not to testify in his own behalf — they hardly had any evidence upon which they could have acquitted him," Cohen said.

Wilson and Plame have sued Libby, Cheney and several other administration officials in federal court. Attorneys at the liberal watchdog group Citizens for Responsibility and Ethics, which brought the lawsuit, praised the conviction and Fitzgerald's team.

"Their prosecution of a senior White House official illustrates that we are a nation of laws and that no man is above the law," attorneys said in a prepared statement.

U.S. District Judge Reggie B. Walton ordered a pre-sentencing report be completed by May 15. Judges use such reports to help determine sentences. Libby will be allowed to remain free while awaiting sentencing.