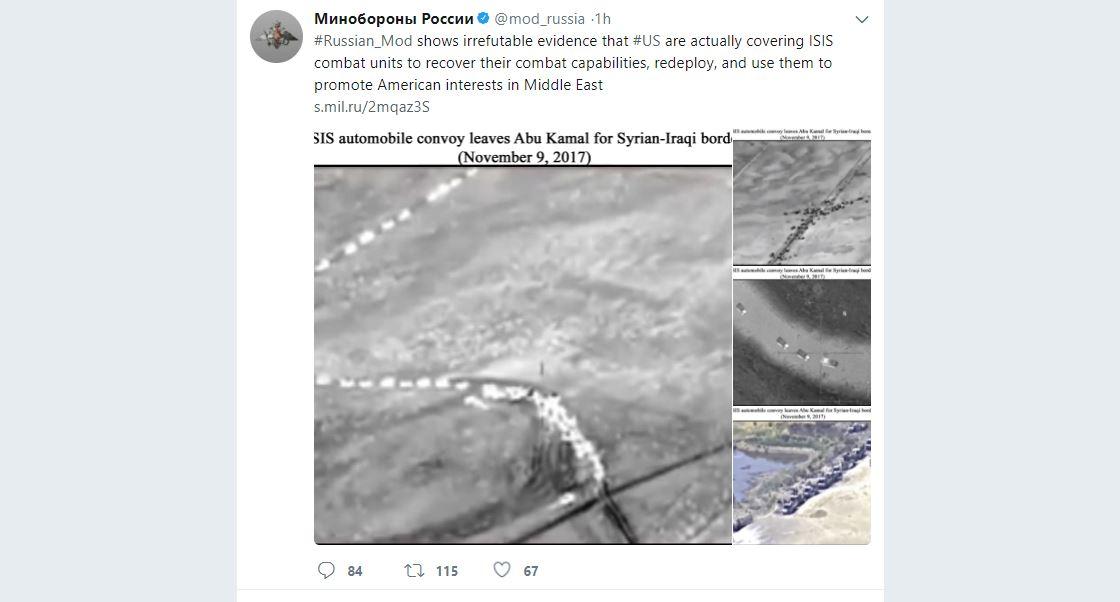 LONDON -- If Russia has a legitimate complaint about U.S. forces letting ISIS militants slip through the closing net and escape their territory in Syria, it appears to have undermined its own argument by laying out the charges with bogus "evidence."

Russia's Ministry of Defense on Tuesday alleged in various statements cited by the country's state-run media, and in social media posts, that the U.S. military "provides cover" for ISIS militants on the ground.

The allegations stem from the recent battle for the Syrian town of Boukamal, on the border with Iraq. Last week, Syria's government declared the town liberated from ISIS after a fierce fight for what had been the Sunni extremists' last urban stronghold in the country.

The Russian MoD tweeted on Tuesday a message accusing the U.S. of "direct cooperation and support" for ISIS. The tweet offered four grainy images as "irrefutable evidence" of that alleged support, each purportedly showing an "ISIS automobile convoy" that had been allowed to leave Boukamal by American forces.

"These facts are conclusive evidence that the United States, while imitating an uncompromising fight against international terrorism for the global community, in fact provides cover for Islamic State units," the defense ministry said.

But as Syrian war analyst Elliot Higgins and other online sleuths pointed out on Twitter, at least three of the images appear to be poor attempts to manufacture "evidence"; one is a screengrab from a computer game, and two others are taken from video or images that came out of neighboring Iraq, a year before the Boukamal battle.

"Having done some digging the images appear to have come from a video game called; 'AC-130 Gunship Simulator - Convoy engagement,' made by a company called; byte conveyor studios," said Higgins.

His own evidence was more convincing; footage from the game posted on YouTube clearly shows an uncropped version of the same image tweeted by the Russian ministry. The Russian tweet failed even to crop out completely the English language text at the top of the computer game screen, which identifies it as "DEVELOPMENT FOOTAGE."

The tweet with the fraudulent images was deleted from the Russian MoD's feed later Tuesday, but not before drawing an onslaught of abuse and ridicule from other users on the social network.

On Wednesday, Russian President Vladimir Putin's spokesman Dmitry Peskov played down the error to reporters, saying "mistakes happen," and adding that the Russian military had quickly fixed the mistake and relieved the civilian contractor responsible of his duties.

Higgins, whose Bellingcat organization spends thousands of man-hours pouring over open-source information to prove and disprove claims from the Syrian battlefield, said in a subsequent post that the use of the bogus images proves Russia's claims about Syria cannot be taken seriously.

A State Department official tells CBS News, "Russia has been making these type of absurd claims for weeks now and we have pushed back on them. They are the ones who are helping ISIS with these reckless and baseless accusations.  There is absolutely no truth to them."

Prior to Russia's allegations on Tuesday, there had been no solid claims that the U.S. military was letting ISIS fighters -- there were an estimated 2,500 to 3,500 ISIS militants around Boukamal, reportedly including some senior figures -- escape. However, local opposition groups and monitors said militants did flee the battle to the north, taking refuge in a handful of towns along the east and west banks of the Euphrates River between al-Mayadeen and Boukamal.

And while is no evidence to support Russia's claim that the U.S. is directly supporting ISIS on the battlefield, if Moscow wanted to portray the U.S. as somehow giving some of the extremists a pass, it could have just cited BBC News.

CBS News' British partner network aired a report Monday night for which it interviewed multiple drivers who were contracted, under an agreement between U.S.-backed Syrian forces and local tribal elders, to ferry ISIS fighters and their families out of Raqqa as the massive city was retaken in October.

The report said the fleeing ISIS convoy included almost 50 rented trucks, 13 buses and more than 100 ISIS vehicles -- including 10 trucks loaded with weapons. The BBC said the U.S.-led coalition knew about the deal brokered by the Syrian Democratic Forces, and monitored the exodus. According to the drivers interviewed by the BBC, about 250 fighters -- including Westerners -- and about 3,000 of their family members were allowed to escape under the agreement.

Responding to the report, a U.S. State Department official told CBS News on Tuesday that it was no "dirty secret" that an arrangement was struck between the Raqqa Civil Council and tribal elders -- and stressed that it was "not an effort led by the Coalition."

The official said the deal was struck "to minimize civilian casualties in the fight that remained to liberate Raqqa."

Further, the State Department official said those who were allowed to leave Raqqa under the arrangement were subject to search and screening by the U.S.-allied SDF forces. Those claims echoed a statement by the U.S. commander of the special operations task force in charge of destroying ISIS in Syria and Iraq.

Speaking in an Oct. 31 briefing, Army Maj. Gen. James Jarrard said that under the deal reached in Raqqa, "what we did do with the SDF, is we did take all of those (ISIS) members and we enrolled them biometrically, so that we are able to track them."

CBS News correspondent Holly Williams reports that allowing ISIS to flee is a tactic that has been used before in Syria and Iraq, and in Raqqa it may well have saved the lives of civilians still trapped in the city. The U.S. military says only four foreign fighters were part of the group that left, but the truck drivers told the BBC the real number was much higher. That is significant, notes Williams, because foreign fighters continue to make their way across the border to Turkey with the help of smugglers. The fear is that some of them could make it back to Europe or even the United States and go on to carry out a revenge attack.

The BBC's reporting contradicts the claims by the U.S. officials that ISIS fighters allowed to leave Raqqa were screened and searched for weapons.

It also contradicts the vow made by the most senior U.S. government envoy to the ISIS fight, Brett McGurk, who in June promised that all foreign ISIS fighters holed-up in Raqqa would die there.

"Our mission is to make sure that no foreign fighters, that any foreign fighter who is here, who joined ISIS from a foreign country and came into Syria, that they will die here in Syria… If they are in Raqqa, they're gonna die in Raqqa," McGurk told an Arabic network on a visit to the war-torn country.