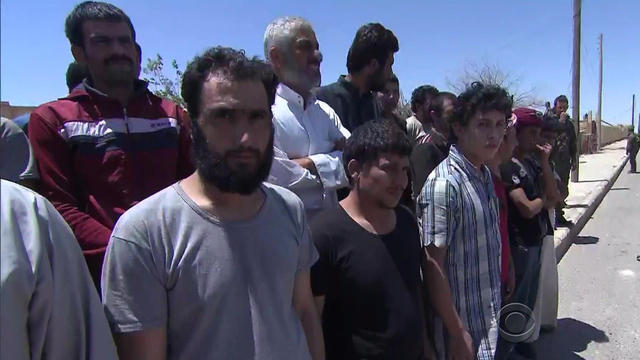 NORTHERN SYRIA -- America's top envoy to the coalition battling ISIS, Brett McGurk, said this week that the U.S. mission in Syria is to make sure that all foreign ISIS fighters still in the city of Raqqa, die there.

"Our mission is to make sure that no foreign fighters, that any foreign fighter who is here, who joined ISIS from a foreign country and came into Syria, that they will die here in Syria… If they are in Raqqa, they're gonna die in Raqqa," McGurk told an Arabic network on a visit to Syria.

He did make it clear, however, that different rules apply to Syrians who joined ISIS in their own country, dozens of whom acknowledged had already been "pardoned" by U.S.-allied authorities in areas reclaimed from ISIS. He said the issue of domestic fighters was "something that the Syrians can work out."

CBS News met a group of former ISIS fighters this week, however, including women from 5,000 miles who had either defected, or were captured.

Some of them were men, others just teenagers. All of them served time in prison for fighting with ISIS but have now been released and reunited with their families. America's allies on the ground in Syria say they've been reformed.

Abu Bakr al-Baghdadi and other ISIS leaders have presided over a reign of terror; enforcing a vicious interpretation of Islam unrecognizable to the vast majority of Muslims.

Ali Hamad, a former farmer, told CBS News that he joined ISIS not because he wanted to kill in the name of his religion, but out of desperation.

"We were hungry," he told us, and there were no job opportunities.

Tens of thousands of people are fleeing Raqqa, the de-facto capital city of the terror group's self-declared "Islamic State," as U.S.-backed forces close in on the extremists.

In a refugee camp in northern Syria, a group of Indonesian women told us they joined ISIS in 2015, traveling 5,000 miles to do so because they believed the group's propaganda.

"If you go there, you move to their place, you go to the paradise, because you are the real Muslim," said one woman, recalling the promises that lured her to Syria.

In reality, they told us, they were abused, and their male relatives imprisoned by the extremists because they refused to fight. They ran away two weeks ago, they said, and are still too frightened of possible retribution by ISIS to show their faces.

"We are so stupid, not just naive, we are stupid. We deceived very easily."

ISIS and its so-called Islamic State preyed on desperation and ignorance, claiming it was waging a holy war against the West. In truth, it has inflicting terrible harm on thousands of Muslims.