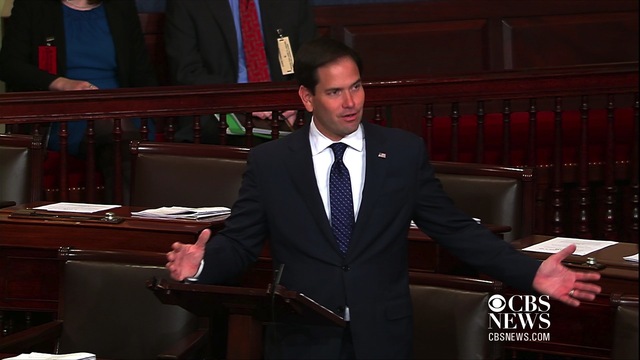 Sen. Marco Rubio, R-Florida, a 2016 candidate, argued on the Senate floor Tuesday that the government should be able to fire Department of Veterans' Affairs (VA) workers who don't do their jobs. However, the senator has faced questions about his own attendance record at work.

"All we're saying in this bill is if you work at the VA and you aren't doing your job, they get to fire you. I think people are shocked that that [doesn't] actually exist in the entire government, since there is really no other job in the country where if you don't do your job, you don't get fired," Rubio said. "But in this instance we're just limiting to one agency. This should actually be the rule in the entire government. If you're not doing your job, you should be fired. But this is limiting to the VA because we've got a crisis there with the lack of accountability."

Rubio was pushing for a vote on his legislation that would further reform employment at the scandal-plagued agency by allowing any employee to be demoted or fired based on performance. A VA reform bill that passed last year gave the secretary of the agency the authority to fire senior managers based on performance. The legislation was passed after revelations about longstanding problems within the VA hospital system.

The long delays for treatment appeared to result in the deaths of several veterans. An internal audit of the department's health care facilities determined that officials had used improper scheduling practices, including the falsification of waiting lists, designed to understate the amount of time veterans had been waiting for treatment. The scandal cost former VA Secretary Eric Shinseki his job, and he was replaced by former Procter & Gamble CEO Bob McDonald.

But Rubio's floor speech could end up in a negative attack ad against him. His critics, particularly the Democratic National Committee, have noted his high absence rate from Senate votes since he began his presidential campaign. The website GovTrack shows that Rubio has missed 11.5 percent of his votes from January 2011 to October 2015, a number that is "much worse than the median of 1.6 percent" compared to his colleagues.

The number of missed votes has ticked up sharply since the beginning of the year. Rubio had missed 100 percent of votes in October before coming to the Capitol this week, and missed nearly 54 percent between July and September.

He defended his high rate of absenteeism, saying in a CNBC interview earlier this month, "Being a senator is more than just casting a vote."

"If there's a vote where my vote is going to make a difference or an issue of major national importance significance or importance, we do everything possible to be there we will be there. I am going to miss votes. I am running for president. Other senators that have run in the past have as well," he said. "It's important to understand, I'm out there campaigning for the future of America, not playing golf."

"We should cut the pay of elected officials that don't show up for work," he said at a campaign event in Iowa earlier this month. "I don't know about you, but this idea that somehow voting isn't important. I mean what are they supposed to do? They should go to the committee hearings, they should vote!"