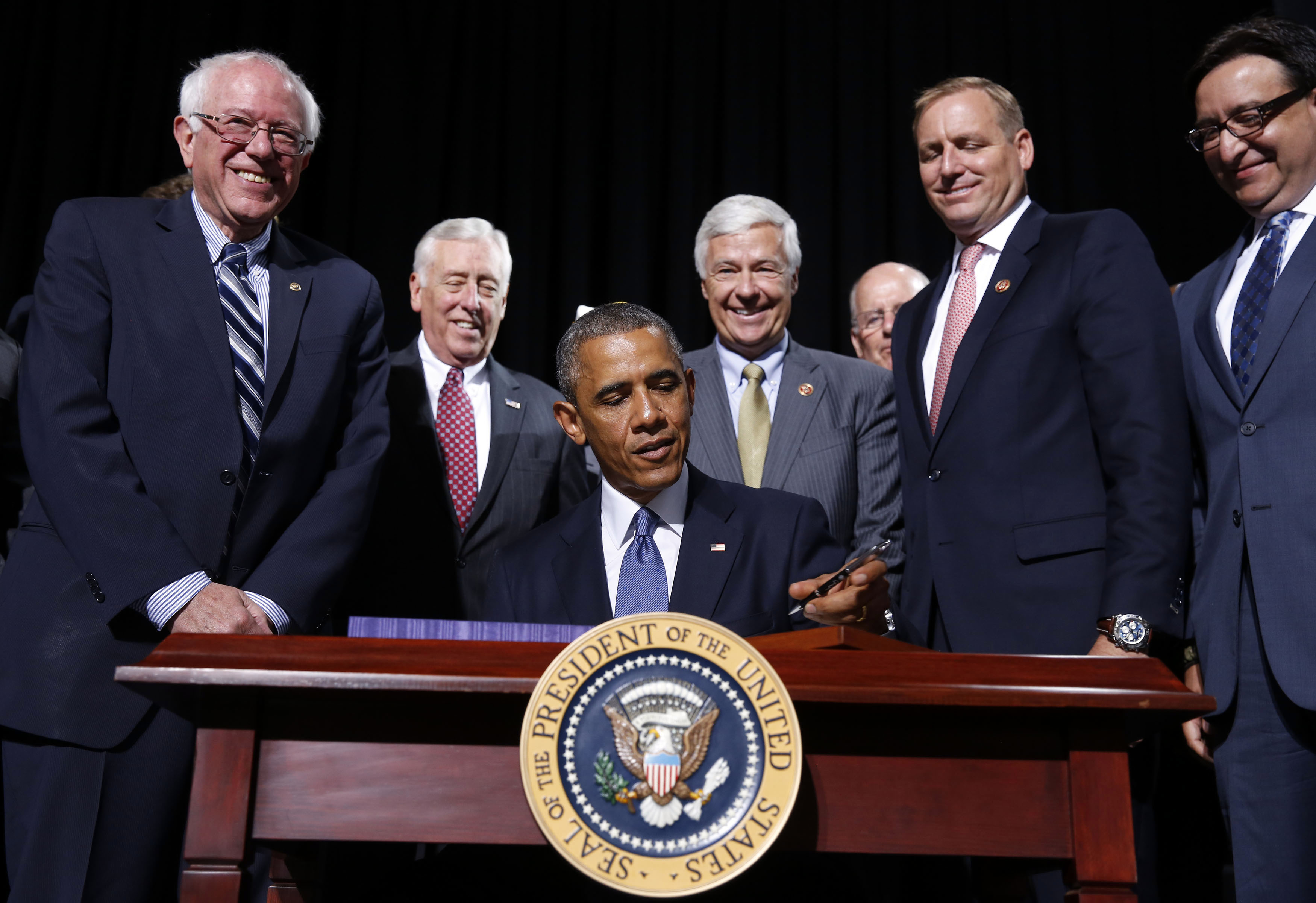 President Obama signed a reform bill for the Department of Veterans Affairs (VA) into law Thursday, one of the only issues on which Congress was able to compromise before leaving town for their five-week recess.

The $16.3 billion proposal, which overwhelmingly passed the House and Senate, includes $10 billion to allow veterans who are unable to receive a timely appointment within the VA system to seek care from outside providers. It also includes $5 billion to allow the VA to hire more doctors and nurses to handle a greater caseload, and approximately $1.3 billion to finance leases for 27 new VA facilities across the country.

"I want to be clear about something: this will not and cannot be the end of our effort," Mr. Obama said at the bill signing ceremony at Fort Belvoir, Va. "Implementing this law will take time. It is going to require focus on the part of all of us. And even as we focus on the urgent reforms we need at the VA right now, particularly around wait lists and healthcare system, we can't lose sight of our long term goals for our service members and our veterans."

He cited progress on cutting the disability backlog, improving mental health services, reducing veterans' homelessness and increasing access to education through the post-9/11 G.I. bill, but said more still could be done on each of those issues.

The president also scolded Congress for failing to confirm several outstanding nominees to the agency and said they should move to do so as soon as they get back in September.

"Our veterans don't have time for politics. They need these public servants on the job right now," he said.

As he sat down to sign the bill, Senate Veterans' Affairs Committee Chairman Bernie Sanders leaned in and joked, "Do you remember how to sign these things?"

"Just barely," the president said. "I don't get enough practice... we should do it more often."

Despite longstanding problems within the VA hospitals system, Congress began urgently searching for a fix earlier this year when it appeared that the long delays for treatment had resulted in the deaths of several veterans. An internal audit of the department's health care facilities determined that officials had used improper scheduling practices, including the falsification of waiting lists, designed to understate the amount of time veterans had been waiting for treatment.

The scandal cost former VA Secretary Eric Shinseki his job. Former Procter & Gamble CEO Bob McDonald was confirmed by the Senate as Shinseki's replacement last week with wide support from Democrats and Republicans, and he has pledged to take action within his first 90 days to deliver reforms and a new vision for the department.

Although both the House and Senate moved quickly to craft VA reform bills after the scandal came to light this spring, negotiations to craft a compromise nearly over differences in price and scope. Republicans wanted the reforms to center around granting veterans the ability to see private doctors if the nearest VA facility is far away or if wait times are too long. Democrats share that goal, but they also wanted to give the VA additional funding to hire more doctors, nurses, and medical staff to try to fix the wait time problem.

"I sincerely hope the president views this event as more than just a photo-op or speaking engagement," House Veterans' Affairs Committee Chairman Jeff Miller, R-Fla., who was unable to attend the signing, said in a statement. "Instead, it should serve as a wakeup call. VA's problems festered because administration officials ignored or denied the department's challenges at every turn. In order to prevent history from repeating itself, President Obama must become personally involved in solving VA's many problems."

Miller encouraged Mr. Obama to meet with family members and veterans who had been affected by the scandal, and to force the VA and Defense Department to establish a joint electronic health record.