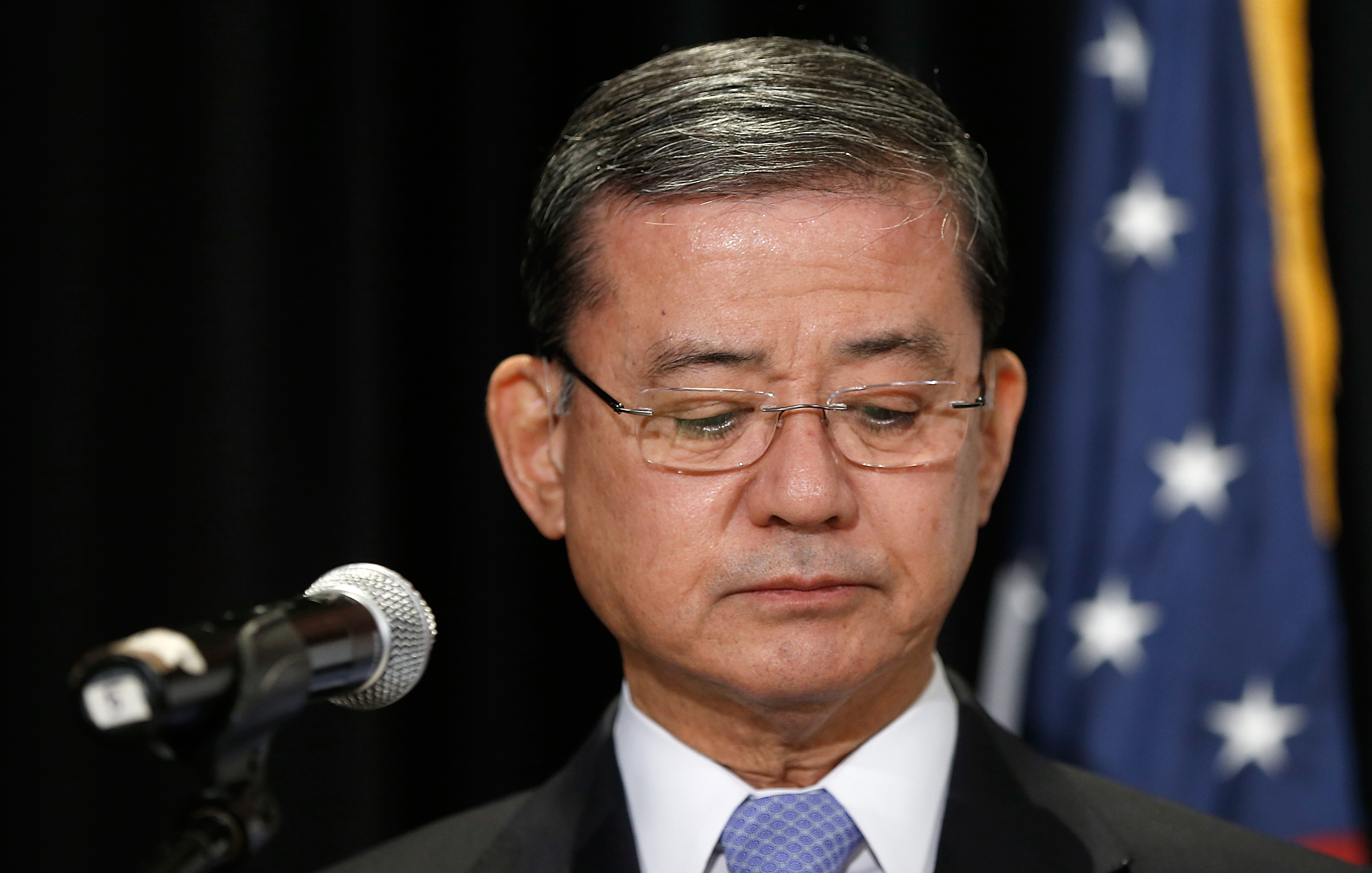 Facing a growing outcry over the scandal at Veterans Affairs medical facilities, VA Secretary Eric Shinseki offered his resignation to President Obama on Friday, and the president accepted the offer.

"A few minutes ago, Secretary Shinseki offered me his own resignation," the president said in a statement in the White House briefing room. "With considerable regret, I accepted."

Mr. Obama said Shinseki had served the country "honorably" as a soldier and a member of the administration, but the two of them agreed that his continued stewardship of the VA would be too great a distraction as the embattled agency seeks to fix its problems.

"He has worked hard to investigate and identify the problems with access to care, but as he told me this morning, the VA needs new leadership to address them," the president said. "He does not want to be a distraction because his priority is to fix the problem and make sure our vets get the care that they need. That was Ric's judgment on behalf of his fellow veterans. And I agree. We don't have time for distractions. We need to fix the problems."

Despite the resignation, the president offered an extended defense of Shinseki, calling him a "good person who has done exemplary work."

"Under his leadership, we have seen more progress on more fronts at the VA and a bigger investment in the VA than just about any other VA secretary," the president said, citing Shinseki's work to reduce homelessness among veterans and help those struggling with post traumatic stress disorder.

The president also reserved a share of the blame for himself. "It's my administration," he said. "I always take responsibility."

He noted that the problems with the VA pre-date his presidency, recalling his work on the Senate Veterans Affairs Committee when he was a member of the upper chamber.

"I pledged that if I served as president, I would fix it," he said. "The VA has had problems for a very long time. We have tried to go after the problems that we were aware of."

The president named Sloan Gibson as acting VA secretary until a permanent successor to Shinseki is confirmed by the Senate. Gibson was previously the deputy secretary of veterans affairs and the president of the United Service Organizations (USO).

Mr. Obama acknowledged that Gibson would face a "learning curve" as he begins working to fix the problems at the VA, and he emphasized the need to have a permanent director of the agency in place as soon as possible.

The president said he would leave judgments about whether any criminal behavior took place to the Department of Justice. The FBI has faced widespread calls in Congress to investigate the scandal, but Attorney General Eric Holder has not yet announced any criminal probe.

A preliminary report from the VA's inspector general released Wednesday found "systemic" problems at a VA hospital in Phoenix, Ariz., confirming the mounting reports of misconduct and lengthy wait times that had been circulating for several weeks. Among other bouts of misconduct, VA officials at the facility falsified waiting lists to understate the amount of time veterans had been waiting for health care. Several dozen deaths have been linked to the delays in treatment.

The president said Friday that an initial review by Shinseki determined the "misconduct has not been limited to a few VA facilities, but many across the country," a situation he called "totally unacceptable."

The VA's audit targeted 216 sites, and of those, "many were flagged for further review because of concerns identified by the site audit team about questionable scheduling practices, signaling a systemic lack of integrity within some Veterans Health Administration facilities," according to an early summary of that audit released Friday.

Shinseki had faced mounting calls for his resignation since the VA hospital scandal caught fire last month. The majority of early calls for the secretary to step down came from Republicans, but after Wednesday's interim report, the dam began to break among Democrats as well. As of Friday morning, 12 Senate Democrats had called for Shinseki to step down, all but three of them up for reelection in 2014. Several Democratic Senate candidates running in Republican-leaning states also called for the secretary to resign.

Veterans service organizations had also called for reform at the VA, and several stressed the need for new leadership. In a statement on Friday, the Veterans of Foreign Wars (VFW) called Shinseki an "American patriot" whose commitment to veterans is "above reproach," but said his resignation was in the best interests of the nation's veterans.

The VFW, which had not previously called for Shinseki to resign, said Shinseki's successor "will inherit a host of ongoing challenges, but he or she must immediately identify and fix what's broken, to hold people accountable to the maximum extent of the law, and to do whatever is necessary to help restore the full faith and confidence of veterans in their VA."

The American Legion, which had previously called on the secretary to step down, said Shinseki's resignation "is not the solution, yet it is a beginning."

"Too many veterans have waited far too long to receive the benefits that they have earned," the organization said in a statement. "Wait times are increasing even for fully developed claims. But it was never just about a few of the top leaders. The solution is to weed out the incompetence and corruption within [the VA] so the dedicated employees can continue to perform admirably on behalf of our nation's veterans."

Reaction from Congress also began trickling in after the resignation was announced.

House Speaker John Boehner, R-Ohio, thanked Shinseki for his service but said his resignation "does not absolve the president of his responsibility to step in and make things right for our veterans."

"Until the president outlines a vision and an effective plan" to fix the problems at the VA, Boehner said, "today's announcement really changes nothing." Boehner had previously declined to join calls for the secretary to step down.

Senate Minority Leader Mitch McConnell, R-Ky., called on the president to replace Shinseki "with a capable leader and manager who possesses the skills, leadership ability and determination to correct the failings of the VA, support the thousands of VA workers who are committed to serving our veterans, and provide all of those who have bravely served with the timely care they have earned." McConnell had previously called for the secretary's resignation.

Sen. John McCain, R-Ariz., who had also called for a resignation, said Shinseki's decision to step down was the "right move at this time."

"New leadership at the VA is just the first step in what must be a significant, sustained effort by President Obama to fix its systemic problems," McCain said.

"The unequivocal goal of the VA must be to provide the highest-quality health care possible to all of our veterans in a timely manner," Sanders said in a statement. "The new leadership must transform the culture of the VA, establish accountability and punish those responsible for the reprehensible manipulation of wait times.