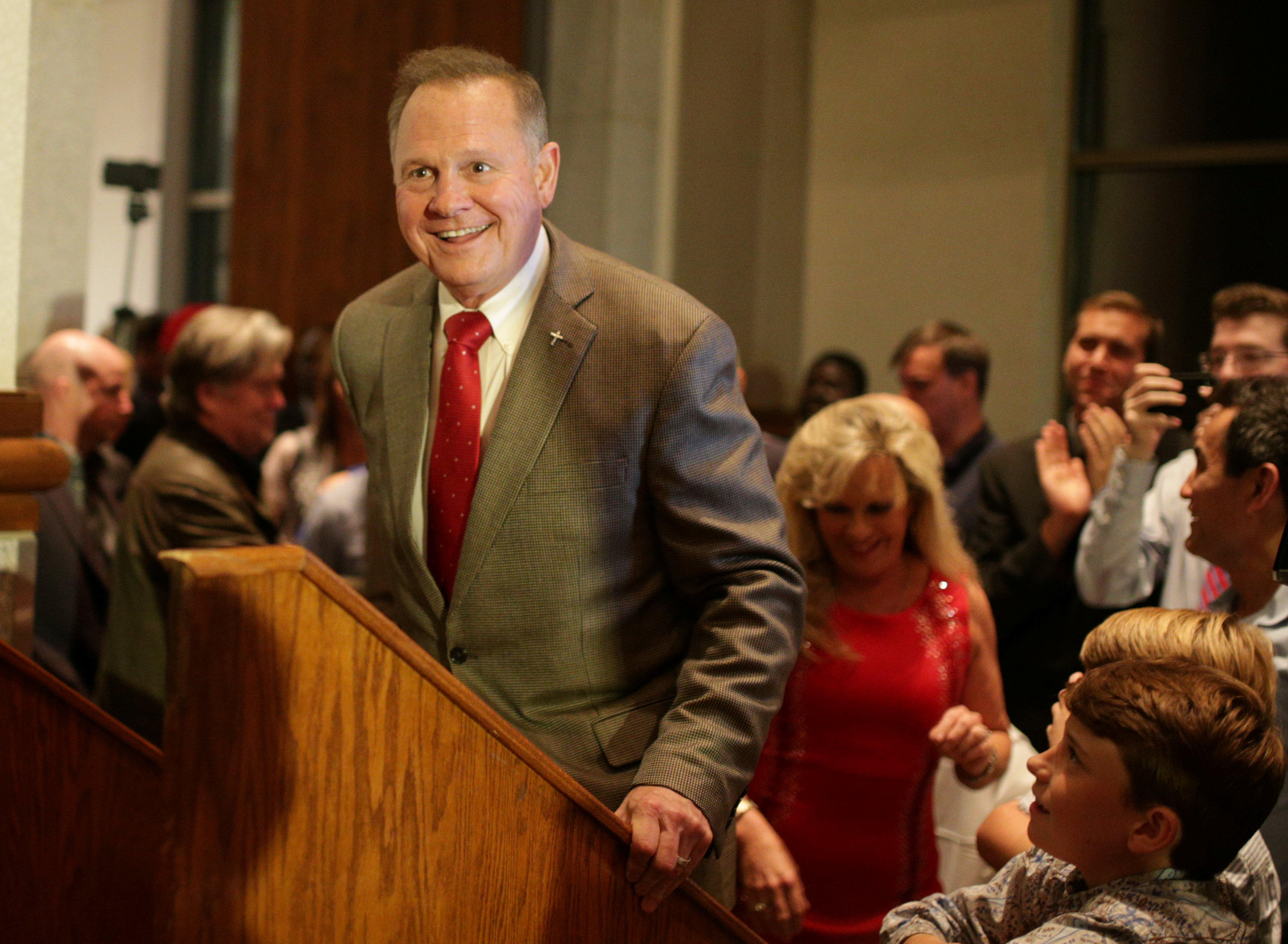 Allegations that Alabama Senate candidate Roy Moore had a sexual encounter with a 14-year-old girl when he was 32 years old made national headlines and caused some of his fellow Republicans to walk back support for him, but reports indicate he still has support from government officials in his home state.

The Washington Post first reported, and CBS News has since confirmed, that four women accused Moore of pursuing them when they were teens.

Leigh Corfman told the Post that in 1979, Moore initiated a sexual encounter with her when she was 14 and he was 32. Three other women told the Post that Moore pursued them when they were between the ages of 16 and 18 and he was in his early 30s, working at the district attorney's office. He gave some of them alcohol -- at a time when the legal drinking age was 19.

On Twitter, Moore posted that the "Obama-Clinton Machine's liberal media lapdogs just launched the most vicious and nasty round of attacks against me I've EVER faced!" He also wrote that he would "never give up."

In a longer statement, Moore called the Post story "completely false and a desperate political attack." He also sent a fundraising pitch Thursday saying he's counting on the help of "God-fearing conservatives like you to stand with me at this critical moment."

Moore is a towering and divisive figure in Alabama politics. Moore was the chief justice of the Alabama Supreme Court, but was removed twice -- once for defying a federal judge's order to remove a Ten Commandments monument from the state judicial building. Then, after he was elected again, a judicial discipline panel permanently suspended Moore in 2016, ruling that he urged probate judges to deny marriage licenses to same-sex couples in defiance of the federal courts.

The women's allegations were met with skepticism by Moore supporters. Alabama State Auditor Jim Ziegler told the Washington Examiner that "there's nothing to see here."

"Take the Bible. Zachariah and Elizabeth for instance. Zachariah was extremely old to marry Elizabeth and they became the parents of John the Baptist," Ziegler told the Examiner. "Also take Joseph and Mary. Mary was a teenager and Joseph was an adult carpenter. They became parents of Jesus ... There's just nothing immoral or illegal here. Maybe just a little bit unusual."

"Nonetheless, don't you find it curious that a national organization comes forward with this and not AL.com? I find it interesting this is coming out ... Who knows whether it happened or not in this day of allegations. Look at the allegations we've seen in the media world here recently. I haven't even read the article yet," Givhan told AL.com.

State Rep. Ed Henry told the Cullman Times he believes the timing of the women's claims was politically motivated and that there should be legal consequences -- for the accusers.

"You cannot tell me there hasn't been an opportunity through the years to make these accusations with as many times as he's (Moore) run (for office) and been in the news," Henry said. "If they believe this man is predatory, they are guilty of allowing him to exist for 40 years. I think someone should prosecute and go after them. You can't be a victim 40 years later, in my opinion."

State Rep. Mike Ball, who has endorsed Moore, told AL.com "our media has turned into the National Enquirer ... Our whole political climate has turned into something silly."

Right-wing publication Breitbart News posted a piece ahead of the Post's publication claiming the newspaper was planning a hit piece on Moore. The Breitbart article focused on: how the allegations took place more than 30 years ago, Post owner Jeff Bezos and that the Post has endorsed Moore's opponent Doug Jones.

Thursday on MSNBC, Breitbart editor Joel Pollack defended its coverage, saying that while some of the allegations are serious, the Post article contained "all kinds of perfectly legitimate relationships as well as all kinds of other political clutter."

Alabama is considered one of the deepest red states in the country.  Prior to Thursday's revelations, Moore had a double-digit lead over Democrat Jones, according to a poll by the Mobile, Alabama-based Strategy Research.

Moore defeated Luther Strange, who was backed by President Trump, for the Republican nomination. The general election will be held Dec. 12. Alabama's secretary of state confirmed Wednesday to CBS News that it is too late to change the ballot. Per state law, if Moore withdraws or the party rescinds its nomination of Moore, any votes for Moore will not count and will not be certified.