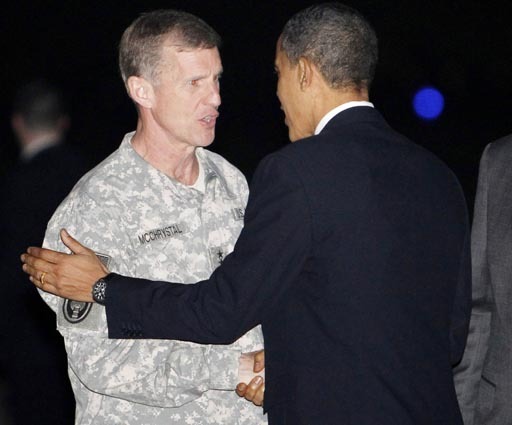 Michael Hastings, the author of the Rolling Stone profile that has put the job of the top military general in Afghanistan in jeopardy, said in an interview with CNN Tuesday afternoon that "it was all very clear it was on the record."

"I had a tape recorder and a notepad in my hand most of the time," he said. Speaking from Kandahar, Hastings added that "there were parts that were off the record that I didn't use."

Hastings said he heard from Gen. Stanley McChrystal's team that there were "fear and concern about parts of the story" before it came out, and that he believed that McChrystal's risk-taking nature resulted in his taking the "calculated risk" of giving a Rolling Stone reporter such access to his inner circle.

Hastings said he was "completely taken aback" by some of the strong comments offered about members of the administration.

"I suspected it, obviously, that there were tensions there," he said. "But the candor in which they were delivered from the minute I arrived in Paris was extraordinary. Most of the material that we use in the story takes place in Paris happened within 24 or 48 hours of me arriving there....this is right off the bat."

Hastings, who is currently embedded with U.S. forces in Afghanistan, ended up spending ten days in Paris and Berlin with McChrystal after getting "stuck" with them because of the volcano in Iceland, according to an interview he gave NBC.

He said the men drank for nearly the entire bus trip from Paris to Berlin.

"They let loose," Hastings said. "I don't blame them; they have a hard job."

Will McChrystal Be Fired? White House Says "All Options Are on the Table"