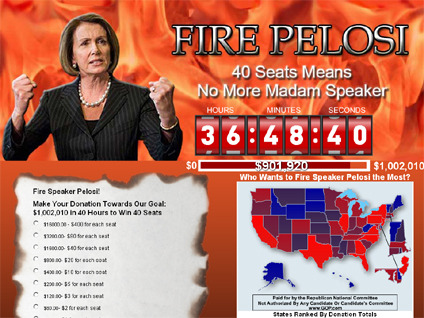 With the health care reform bill about to be signed into law, Democrats are trumpeting the benefits of the legislation that will go into effect, such as tax benefits for businesses to pay for their employees' health insurance and help for families whose children have pre-existing conditions. "This is a great day," President Obama's senior adviser David Axelrod said on CBS' "The Early Show."

But Republicans are decrying such talk as distracting from what they call the law's ill effects. Republican national Committee Chairman Michael Steele likened it to a child's visit to the doctor: "When you were a kid and you had to get the needle and before you got the needle, the doctor put a nice juicy lollipop in front of you and said, 'Here's a lollipop!' and he hits you with the needle. And that's what's going to happen here.

"[Axelrod] didn't talk about the money being taken out of Medicare, an already bankrupt system that we'll now extract $506 billion from. He didn't talk about the $500 billion in new taxes that will be imposed on those small businesses that will more than offset any tax credit they get to pay for premiums for their employees. So there's a lot of a needle-type experience in a people will have while they're sucking on the lollipop that David Axelrod has put in front of him, and the reality is this is a bad bill.

"Nancy Pelosi was right: Now that they've passed it, we get to see what's in. I don't think that's the way you deal with one-sixth of our economy — certainly not the way the American people wanted this to unfold," said Steele, who added that "every effort should be afoot to repeal it." (video above)

Steele also directed his anger towards a rewrite of the student loan program, which eliminates reliance on private lenders by switching to direct government loans. The move will save $61 billion over the next decade.

"So this government knows no bounds. And I think there's a lot in this bill yet to be revealed when the American people. And when it's further revealed, it will be less liked."

"Early Show" anchor Maggie Rodriguez asked Steel about the RNC's Web site, which currently features a call to "Fire Pelosi" against a hellish backdrop on its home page. "Isn't this a little bit extreme?" Rodriguez asked. "What can you accomplish with this?"

"Actually, I tamed it down," Steele said.

"The reality of it is, I don't know why you're surprised. Nancy Pelosi is the architect of the demise of one-sixth of our economy. She should be fired for her failure to serve the interests of the American people. This administration and this Congress thumbed their nose at the American people over the last year — countless town hall, Tea Party events, 30,000 people on the mall the day that they're signing this bill saying 'Don't do this.' They did not listen. Their arrogance knows no bounds.

"So I'm inviting people to join me in giving us a Congress that will work for the people and not for Nancy Pelosi. Congressman Stupak" — a socially-conservative Democrat who switched his vote from no to yes after getting assurances that federal money would not go to funding abortions — "should be ashamed of himself. Clearly her reach is strong."

Axelrod, however, said he does not believe that Democrats will regret passage of the bill this November, and that Americans — many of whom are not familiar with the law's specific provisions — will applaud the bill once the benefits are known.

"I'm not going to live to regret it come November or many Novembers to come, because I know what had this bill means. (video at left)

"I know personally what it means: I have a child with a chronic medical condition. There was time in my life when I couldn't get her the proper insurance, and it was a great big strain on my family. I know there are millions of other families with kids with pre-existing conditions who have some more security today because of what we did. I know small businesses will get significant tax credits to pay for health care for their employees because of what we did. People will not be thrown off their insurance any longer simply because they become seriously ill. And there are so many things that will flow from this that will give people more security.

"So I have no regrets, nor do I have any fears about November as a result of this."

"It's very interesting," said "Early Show" anchor Harry Smith. "The polls show plenty of Americans don't like this health care reform bill, but if you really look at the poll, they also don't know what's in it. It sounds like you have a monumental sales job ahead of you."

"Well, the difference, though, is now the bill's a reality, it's not a theory," Axelrod said. "We're not dealing with caricatures placed on it by opponents and by the insurance industry. We're dealing with the reality of it.

"So as it gets implemented, the reality — which those individual elements are all very popular — people will become familiar with what it is and what it isn't, and I think we'll profit from that."

Summary of What's in the Bill
Provisions Which Take Effect in Short-Term
Uninsured? What the New Bill Means for You
Already Insured? Get Ready to Pay More
Calorie Counts Coming to Many Food Menus
College Aid Reform Passes with Health Bill
Read the Text (PDF): Complete Senate Bill | Reconciliation Measure