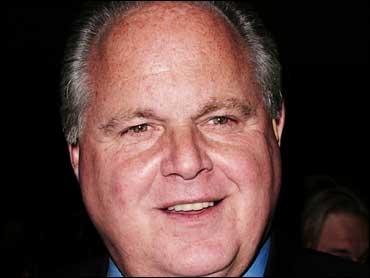 Conservative talk show host Rush Limbaugh took to the airwaves Monday and assailed passage of a health care reform passage, declaring that "the will of the people was spat on yesterday" and telling his listeners, "America is hanging by a thread."

"We really are facing the prospect that our country will never be the same," Limbaugh said, adding: "It is an utter disaster."

He stated that "our freedom has been assaulted" and that Democrats see the will of the American people as "something to be crushed."

"We're not a representative Republic," he said. "You can't even say, loosely defined, that we are much of a Democracy." He said the vote was not about health care or insurance but about turning people "into dependents."

Limbaugh said his backers must now focus on the future and try to win elections, arguing that Democrats have to be "hounded out of office."

Limbaugh said lawsuits to overturn the bill are "an uphill climb," adding that "we can't rely on lawsuits to win the day." He said Republicans who back repeal better "mean it."

"It better be more than a campaign slogan," he said, arguing that repeal could come if Republicans win enough Congressional seats in November.

Limbaugh also targeted Rep. Bart Stupak (D-Mich.), the opponent of abortion rights who elected to support the bill despite earlier misgivings. He said Stupak "humiliated and disgraced himself" and should be pushed out of office for "misleading an entire nation" by first opposing the bill.

"He has as big a role in destroying this country as it was founded as Barack Obama does," Limbaugh said, adding that Stupak "damaged the already crippled Democrat party more than he knows, more than they know." He said the lawmaker "just wanted his 'notice me' moment" and compared him to former British Prime Minister Neville Chamberlain, known for his appeasement policy. (You can listen to Limbaugh's remarks here.)

Limbaugh's critics, meanwhile, decided to have a little fun with the talk show host's comment earlier this month that he will eventually leave the country if the health care bill passes and its provisions are implemented.

"I'll just tell you this, if this passes and it's five years from now and all that stuff gets implemented -- I am leaving the country. I'll go to Costa Rica," he said.

In what they bill as an effort to help him out, two Brooklyn residents started a site called "A ticket for Rush" that asks people to donate $1 toward buying Limbaugh a ticket to Costa Rica.

If he refuses, they say, they will donate the money to Planned Parenthood Action Center.