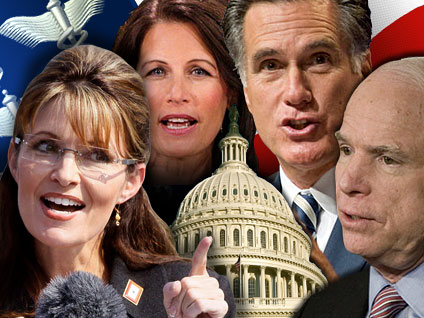 Efforts to combat the Democrats' health care bill in Congress and the courtroom are growing, even as some question their potential effectiveness.

A number of the Republican party's leading figures on Monday said they support efforts to repeal the health care bill passed in the House on Sunday and that President Obama will sign into law today.

Already, three of the GOP's most prominent conservative voices, Reps. Steve King (R-Iowa) and Michele Bachmann (R-Minn.), as well as Sen. Jim DeMint (R-S.C.), are introducing legislation to repeal the bill, even though the party is nowhere near to having the votes necessary to pass a repeal bill.

On top of that, some of the Republican party's likely 2012 contenders have weighed in on the matter. Former Alaska Gov. Sarah Palin yesterday called the health care vote a "clarion call and a spur to action" and endorsed the repeal of the "dangerous portions of Obamacare." Former Massachusetts Gov. Mitt Romney, also called for the bill to be repealed, in spite of the comparisons often made between the Democrats' health care plan and Romney's Massachusetts health care plan.

As conservative advocacy groups like the Club for Growth push grassroots support for the repeal of the bill, some vulnerable Republicans facing primaries will likely face the question of whether they support the effort. Sen. John McCain (R-Ariz.), who faces a stiff primary challenge, said yesterday the bill should be repealed.

Meanwhile, new GOP Sen. Scott Brown of Massachusetts, who campaigned on both fighting the Democrats' health care bill but also on the promise of serving as an independent thinker, eventually said he supported the repeal efforts.

"In order to repeal it, you need to see what's in fact going to be in place. I think that's a little premature,'' Brown said early Monday, the Boston Globe reports.

But later that night, Brown reportedly said his earlier comments were mischaracterized, the Globe reports, and said of the health care bill, "I'm going to repeal it because it's bad for our state.''

The New York Times' Adam Nagourney writes in an analysis that the health care debate has challenged the GOP strategy of presenting a unified front against Democratic ideas.

Some political strategists think it would be wiser for the Republican party to move onto to other issues like the economy, the Hill newspaper reports. Democrats see the Republican opposition as a losing strategy as well: The Democratic Senatorial Campaign Committee is already targeting GOP candidates who have shown support for repeal, including Rep. Mark Kirk (R-Ill.), former New Hampshire Attorney General Kelly Ayotte and Kentucky Secretary of State Trey Grayson, according to the Hill.

Meanwhile, dozens of states are considering legislation to block parts of the legislation, namely the mandate for all individuals to acquire health insurance. The American Legislative Exchange Council, an association of conservative state legislators, is ratcheting up efforts to block the mandate, the New York Times reports.

However, the Times also reports that constitutional scholars suggest the cases would only serve as a "speed bump" for the legislation, since Congress has well-established powers to create taxes, like the individual mandate (which fines individuals who do not acquire insurance).

"The Constitution nowhere authorizes the United States to mandate, either directly or under threat of penalty, that all citizens and legal residents have qualifying health care coverage," the lawsuit says, according to the Associated Press.

The legal challenge is being lead by Florida Attorney General Bill McCollum, a Republican who is running for governor. Eleven other Republican attorneys general are joining him, along with one Democratic attorney general.