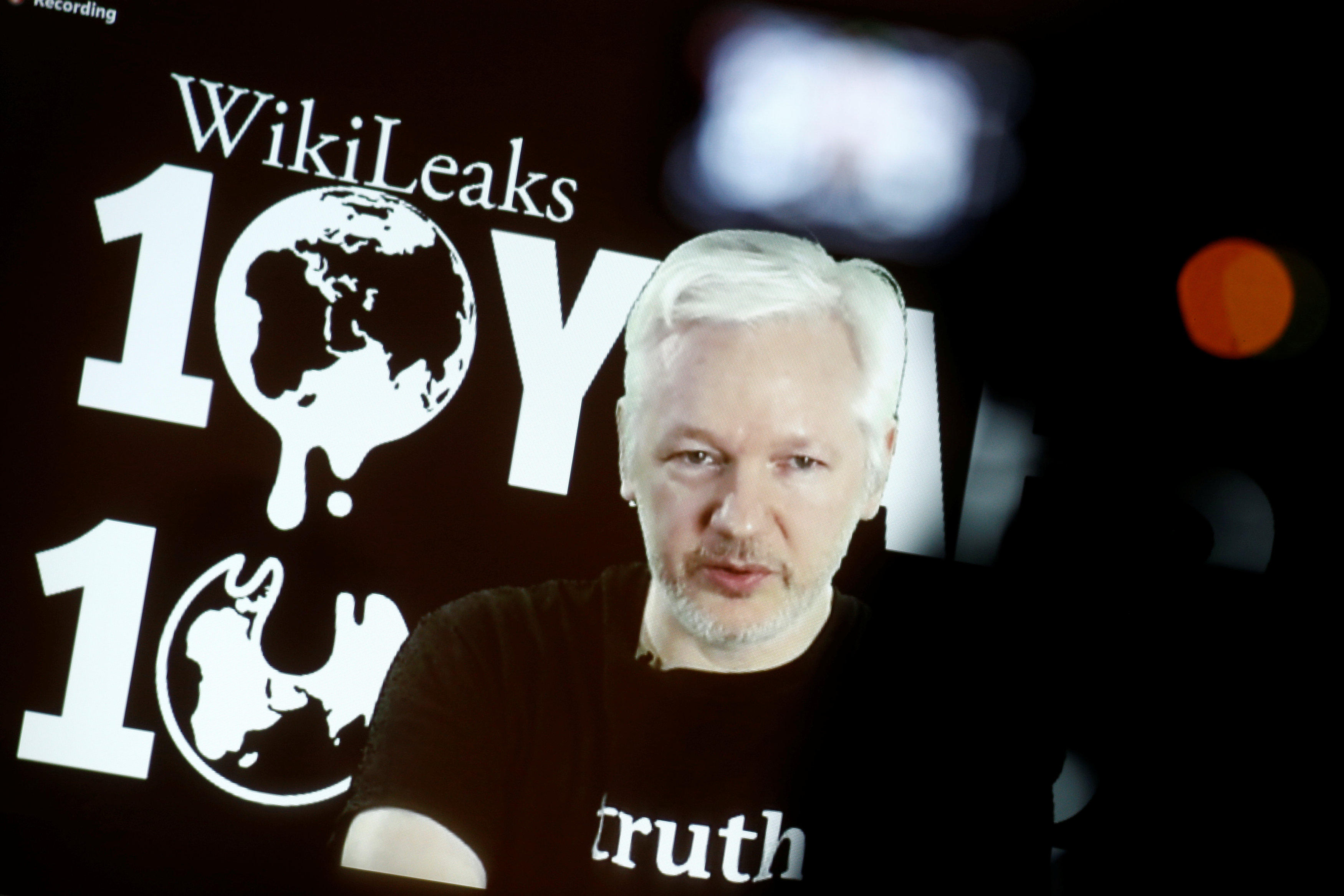 WikiLeaks became a focal point of the 2016 presidential election, and on Thursday, Reddit users took the controversial document-sharing site to task during an AMA, or “Ask Me Anything” session.

WikiLeaks’ periodic email dumps during the 2016 presidential election targeted Hillary Clinton, her campaign, and the DNC, and arguably proved to be disastrous.

Over the summer, WikiLeaks released thousands of internal DNC emails. The emails led to questioning about the fairness of the Democratic process, and the DNC’s apparent favoring of Clinton over her former rival Vermont Sen. Bernie Sanders. Most recently, WikiLeaks released thousands of emails from accounts used by Clinton campaign chairman John Podesta, who has since acknowledged his emails were hacked.

The persistent email dumps, while praised by some, also brought much criticism, including Russia’s possible involvement in the email hacks. On Thursday, WikiLeaks staff held an AMA following Tuesday’s election of Donald Trump as president.

Many users had tough questions for WikiLeaks. Along with alleged Russian involvement in the hacking, these questions also included WikiLeaks’ role in Trump’s U.S. election win, its sourcing, and its focus on releasing information about the Democrats and Clinton, and not Republicans.

Among the highlights of the AMA, was WikiLeaks revealing it decides to publish information according to its “promise to sources for maximum impact.” WikiLeaks also denied colluding with Trump’s campaign and Russia, and defended the information it dumped and its timing.

Here are some of the top questions asked of WikiLeaks during the Reddit AMA, followed by WikiLeaks’ answers. The questions and answers have been published in full below, without editing:

Q: Why did you want Donald Trump to be elected president?

A: Sorry to just see this one now. We arent ignoring the question. There are a lot of questions coming in - which is great, just please forgive us for taking time to go through them....

We were not publishing with a goal to get any specific candidate elected. We were publishing with the one goal of making the elections as transparent as possible. We published what we received.

I know that many media, including the New York Times, did editorially back one candidate over another. We didnt and havent. We would have published on any candidate. We still will if we get the submissions.

Q: Many people have suggested that WikiLeaks was brazenly partisan in this election and colluded with Team Trump (and by extension, Russia). Just today a top Russian ally to Putin is quoted as saying Russia did not interfere in the election but “maybe helped a bit with WikiLeaks”.1

“How much do you consider the impact of selective releasing, insinuation, the timing of releases and the intentions of your sources when preparing to release documents?

1. Note: the ally was speculating, not admitting - https://www.theguardian.com/us-news/2016/nov/09/putin-applauds-trump-win-and-hails-new-era-of-positive-ties-with-us?CMP=share_btn_tw

A: The allegations that we have colluded with Trump, or any other candidate for that matter, or with Russia, are just groundless and false. We receive information anonymously, through an anonymous submission platform. We do not need to know the identity of the source, neither do we want to know it.

The intention of the source is irrelevant in our editorial process. Every source of every journalist has an intention and an agenda, may it be hidden or clear. Requesting the intention from our sources would firstly likely jeopardize their anonymity, and secondly form a bias in our understanding of the information we received.

Their authenticity and their relevance to the public or the historical record are the only preconditions for us to publish the documents we are given.

A: I dont know. We are rather annoyed though he tried to take credit for our work! ;)

He is just a political pundit, akin to the likes of Bill O’Reilly, and was just repeating speculative claims.

Q: How did you decide timing of #PodestaEmails and how to groups emails into parts?

A: We publish according to our promise to sources for maximum impact, along with our goal of informing the public, so often we split large archive releases into sections to ensure the public can fully absorb and utilise the material. For the Podesta Emails our release strategy was based on our Stochastic Terminator algorithm. We are of course also only able to publish as fast as our resources allow. You can help us to publish faster by supporting us here: https://shop.wikileaks.org/donate

Q: Why do you only seem to have information on Democrats?

If you were as Noble as you say you would believe in government accountability at all levels, not just for one party.

A: To date, we have not received information on Donald Trump’s campaign, or other campaigns. If it were to be submitted now we would happily publish it. Information on how campaigns are fought is important in the moment, and after to learn lessons from. We certainly believe in accountability and transparency for the powerful. And this includes for all the campaigns in the election. We can of course only publish what we receive. If anyone has information on any of the other campaigns we urge them to submit it now before it is deleted - https://wikileaks.org/#submit

Q: Why did you choose to expose Clinton and not trump?

A: There was no choice to be made. We release information that we receive. We cannot release what we don’t have.

Is there anything they wouldn’t leak?

Q: Are there any things that you wouldn’t condone leaking? Anything that has come in that was just too much of a risk, or would have too much impact on something?

A: We have an editorial policy to publish only information that we have validated as true and that is important to the political, diplomatic or historical. We believe in transparency for the powerful and privacy for the rest.

We publish in full in an uncensored and uncensorable fashion. We have had to, and will have to, take risks ourselves (the secret Grand Jury that began due to our 2010 publications continues to this day) in a number of the publications we do. But we are not risk adverse and will continue to publish fearlessly.

Q: How much information comes from sources wikileaks is aware of vs. those that are anonymous?

A: Our submissions system is based on the concept of sources being as anonymous and protected as possible. We dont want to know who our sources are for their protection, and ours.

Q: Curation and deciding “how to present and where and when” is gatekeeping. Editorial voice is as much about deciding where and when to say something as it is about what is said. Thinking that somehow you’re not a gatekeeper when you are timing the release of information for maximum political impact is either disingenuous or dangerously naive.

A: We decide for maximum impact, source protection etc with the goal to publish as soon as possible after submission as we are ready (things like source protection and validation can take some time) according to our editorial policies. We do not withhold or censor information and we publish full archives. If we didnt that would be gatekeeping. We have published more classified or otherwise supressed documents than the rest of the worlds media combined. We do publish as fast as we can. We always call for leaks early and often to ensure that as fast as possible is as fast as needed.

Q: Why wasn’t the DNC corruption, or any of Hillary’s corruption scandals released; you know, when Bernie was still in the race?

A: We publish as fast as we can. When we started that publication it was the first day we were ready. We were able to go out just before the nomination, but to do that we had to work all through the night. As we say: leak early and leak often.

Q: What is your response to Snowden’s remarks saying: Democratizing information has never been more vital, and @Wikileaks has helped. But their hostility to even modest curation is a mistake.

A: This sort of conversation about a journalist’s role in controlling information is an important one. We have also had public conversations with Glenn Greenwald on this too. I like that these happen publicly, so that the public can follow and interact with the position of both sides and make up their own minds.

I think it was clear even before this twitter exchange that WikiLeaks and some others have different stances on this. For example it has been said the whole Snowden archive will never be published - something we highly disagree with.

Regarding the curation comment - I would disagree with Snowden’s comment here. Working at WikiLeaks I know we do work with our submissions a lot for validation, how to present and where and when.

The entire AMA can be read here.