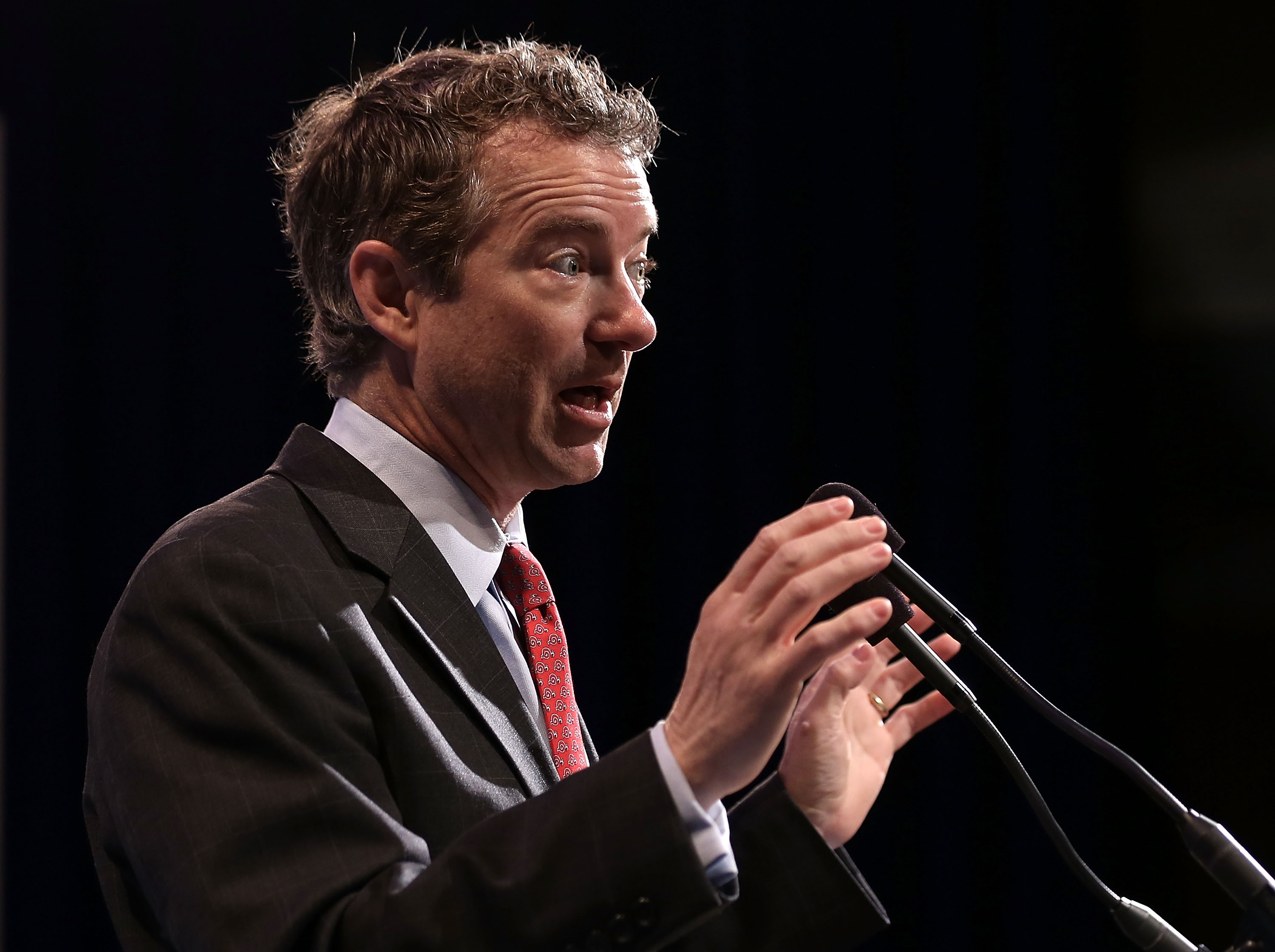 Sen. Rand Paul, R-Ky., told a skeptical audience at a historically black university in Washington, D.C., on Wednesday that he has "never wavered" in his support "for civil rights or the Civil Rights Act," despite a kerfuffle during his 2010 Senate bid in which he suggested that private businesses should not be forced to adhere to the 1964 law that sought to end segregation and other forms of public discrimination.

"No Republican questions or disputes civil rights," Paul said during a speech at the Howard University School of Business. "I've never wavered in my support for civil rights or the Civil Rights Act."

Still, he admitted, his first riff on race relations as a prospective politician didn't "go so well for me."

During his 2010 race for Kentucky's Senate seat, Paul was asked by the Louisville Courier-Journal whether he would have voted for the Civil Rights Act of 1964. He explained, "I like the Civil Rights Act in the sense that it ended discrimination in all public domains, and I'm all in favor of that."

But, he added, "I don't like the idea of telling private business owners - I abhor racism. I think it's a bad business decision to exclude anybody from your restaurant - but at the same time, I do believe in private ownership."

In a subsequent interview, MSNBC's Rachel Maddow asked Paul whether he thought a private business "has the right to say we don't serve black people."

Paul responded, "Yes," explaining, "I'm not in favor of discrimination of any form. I would never belong to any club that excluded anybody for race...But I think what's important about this debate is not written into any specific 'gotcha' on this, but asking the question: What about freedom of speech? Should we limit speech from people we find abhorrent? Should we limit racists from speaking?"

After his comments sparked an uproar, Paul clarified in a statement, "I have clearly stated in prior interviews that I abhor racial discrimination and would have worked to end segregation. Even though this matter was settled when I was 2, and no serious people are seeking to revisit it except to score cheap political points, I unequivocally state that I will not support any efforts to repeal the Civil Rights Act of 1964."

At Howard, Paul explained that, despite "political enemies" who "often twist and distort my positions," his only question was about how much of the remedy to discrimination "should come under federal, or state, or private purview." He explained that "there are occasions...of such egregious injustice that they do require federal involvement."

Paul, a rising Republican star who won this year's straw poll at the Conservative Political Action Conference and is seen as a likely 2016 contender for his party's presidential nomination, acknowledged that Republicans face difficulties among black voters because their policies are often seen as callous or "uncaring."

"Several generations of black voters have never voted Republican and are not very open to considering the option," he said. In the future, though, Paul said he hopes "Some of you will be open to the Republican message that favors choice in education, a less aggressive foreign policy, more compassion regarding nonviolent crime and encourages opportunity in employment."

In the meantime, Paul admitted, the GOP faces a "daunting task" in reaching out to black voters.

That "daunting task" was on full display during Paul's speech on Wednesday. Though the audience was largely respectful, at one point, a protestor unfurled a banner that read "White Supremacy" before being escorted from the hall by campus police. Later, when Paul asked whether the audience knew that the founders of the NAACP were Republicans, one student responded, "We know our history."

"I don't mean to be insulting," Paul explained. "I don't know how much you know."

After the speech, several Howard students commended Paul's bravery in electing to speak at Howard, but they suggested that he'll need to do more if he hopes to make real inroads with the black community.

"I felt like he kind of skirted around some of the issues," Monique Dodd told CBS News. "I really commend him for coming here and starting something, but I feel like more Republicans should do that."

Howard senior Julian Lewis said Paul's speech was "a step in the right direction as far as the Republican Party is concerned and how they speak to African-Americans."

But Lewis added, "I hope that Sen. Paul is under no illusion that anything he has said will erase what the Republicans have been doing to undermine the voting rights of black and brown people in this country. I really think that he hopes and prays that he can sweep it under the rug the best way he knows how."