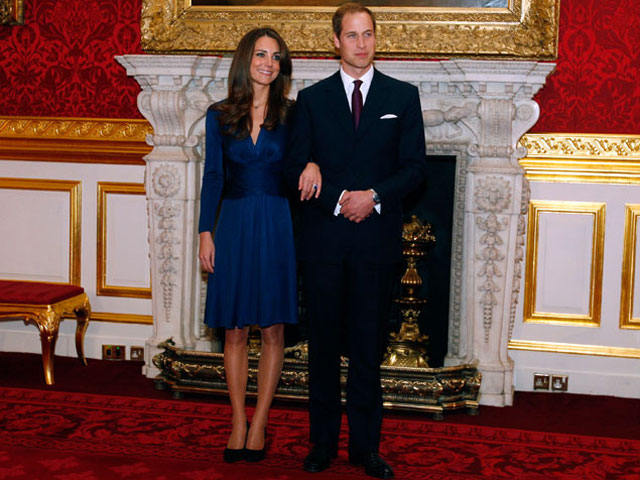 "Blimey," said William as he faced a torrent of camera flashes Tuesday at St. James's Palace. He wore a navy suit, while Middleton donned a simple blue dress.

Middleton acknowledged that being queen was "a daunting prospect."

"Hopefully I'll take it in my stride," she said.

Middleton described the proposal this way: "It was very romantic, and it was very personal." She declined to say whether the prince had gone down on bended knee when he proposed.

While she stayed mum on the details, William did open up about one thing - the engagement ring that he gave her. The oval blue sapphire surrounded by diamonds, from the jeweler Garrard, was once worn by his mother, Princess Diana.

"This was my way of making sure that my mother didn't miss out on today," he said.

William proposed during a holiday in Kenya last month. The couple plans to marry next year.

The two met as freshmen at the University of St. Andrew's in Scotland, starting out as just friends but quickly becoming boyfriend and girlfriend.

Read more on the royal engagement:
Kate Middleton's Engagement Ring is Princess Diana's
Prince Harry was First to Congratulate His Brother
Charles and Diana's Wedding: A Look Back
Engagement Timing was Crucial for Queen
Two Royal Weddings in 2011
What Royal Title Will Kate Middleton Get?
Who is Britain's Future Princess?
Prince William and Kate Middleton are Engaged