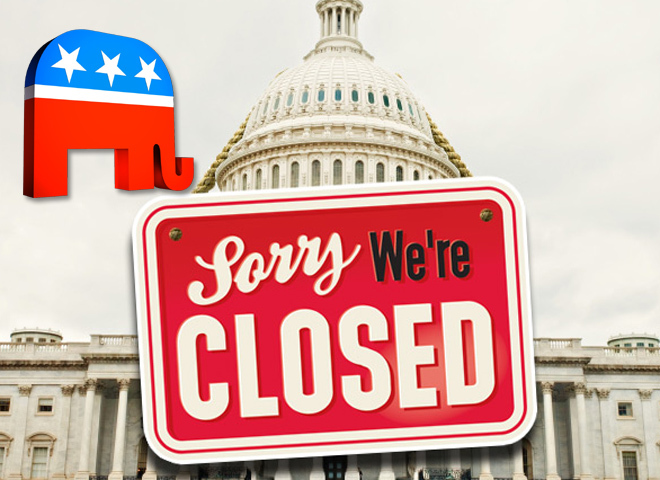 On day three of the

partial government shutdown , a new CBS News poll reveals that a large majority of Americans disapprove of the shutdown and more are blaming Republicans than President Obama and the Democrats for it.

Fully 72 percent of Americans disapprove of shutting down the federal government over differences on the Affordable Care Act; just 25 percent approve of this action. Republicans are divided: 48 percent approve, while 49 percent disapprove. Most tea party supporters approve of the government shutdown - 57 percent of them do. Disapproval of the shutdown is high among Democrats and independents. This CBS News poll was conducted after the partial government shutdown began on October 1.

Republicans in Congress receive more of the blame for the shutdown: 44 percent of Americans blame them, while 35 percent put more blame on President Obama and the Democrats in Congress. These views are virtually the same as they were last week before the shutdown, when Americans were asked who they would blame if a shutdown occurred.

When the government shut down back

in November 1995 , 51 percent of Americans blamed the Republicans in Congress, while 28 blamed President Bill Clinton.

Most Americans want compromise. Majorities think the President and the Democrats in Congress (76 percent) and the Republicans in Congress (78 percent) should compromise in order to come to an agreement on the budget.

But there are some party stalwarts who

don't think compromise is the way to go . Thirty-eight percent of Republicans say members of their party in Congress should stick to their positions even if it means not coming to an agreement, while 36 percent of Democrats say that about their party.

A slim majority of Americans (51 percent) think a resolution will be reached soon, but a sizable 42 percent expect that will take a long time. Democrats (62 percent) are the most optimistic that there will be a resolution in the near future.

This poll was conducted by telephone October 1-2, 2013 among 1,021 adults nationwide. Data collection was conducted on behalf of CBS News by Social Science Research Solutions of Media, Pa. Phone numbers were dialed from samples of both standard land-line and cell phones. The error due to sampling for results based on the entire sample could be plus or minus three percentage points. The error for subgroups may be higher. Interviews were conducted in English and Spanish. This poll release conforms to the Standards of Disclosure of the National Council on Public Polls.