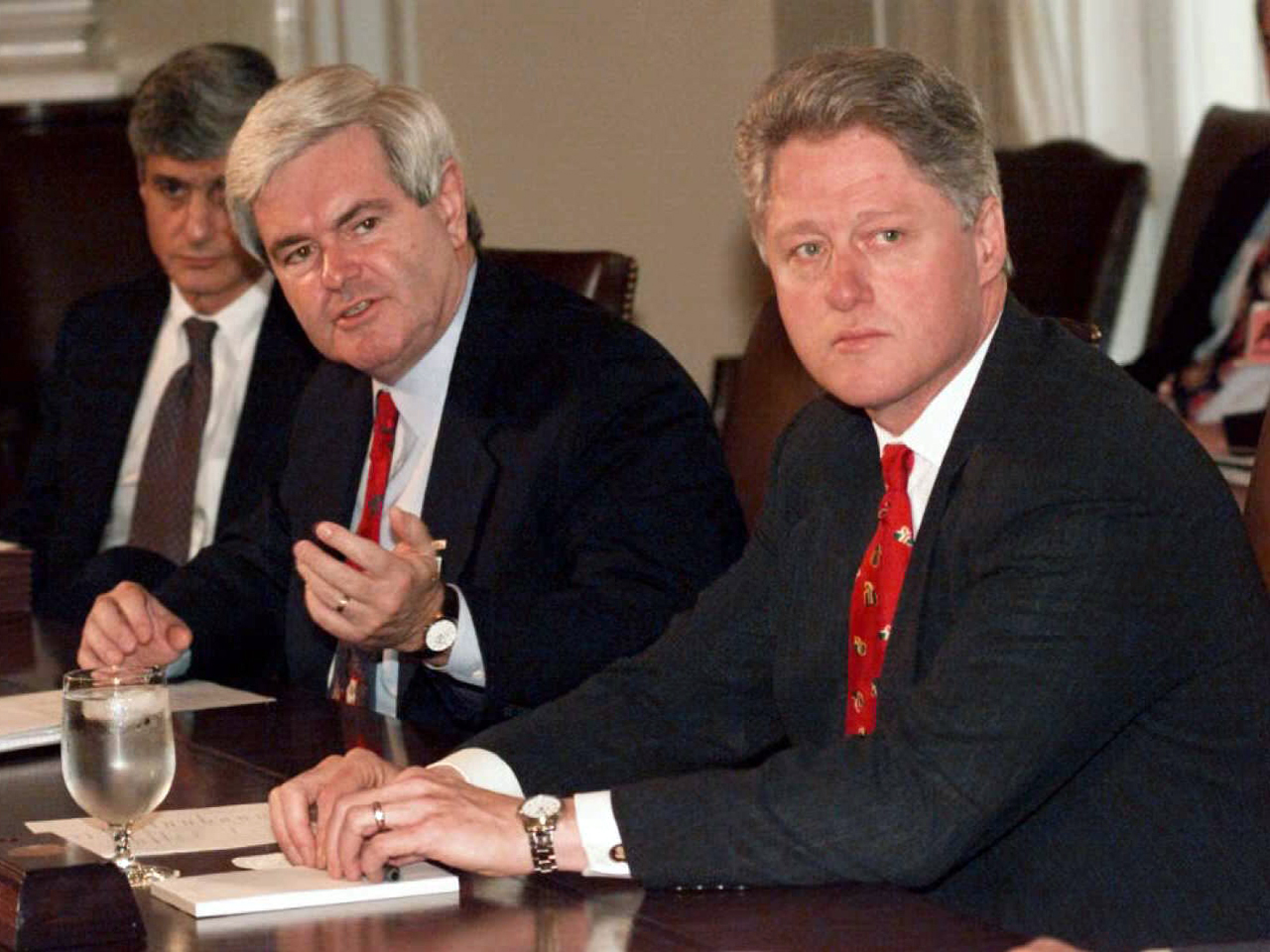 The last time there was a partial shutdown of the federal government, there was a Democrat in the White House and Republicans controlled the House of Representatives. That's where the similarities end.

As the government shutdown enters its third day, Democrats and Republicans seem no closer to bridging their differences than they were when the shutdown began early Tuesday morning. It's difficult to say when the standoff will end. The two shutdowns that occurred in 1995 and 1996 lasted a total of 27 days. And back then, the conditions for getting to a deal were much better.

Republicans won the House and Senate in the 1994 midterm elections - the first time the party had a House majority in 40 years. That set up a showdown between House Speaker Newt Gingrich, who had run on a conservative platform, and then-President Bill Clinton. That dispute came in 1995, when Gingrich wanted to balance the budget in a short time frame and Clinton wanted money spent on Democratic priorities. After two separate shutdowns and several weeks, the pressure was too high on Republicans and they cut a deal with Clinton: he would get his priorities, but would have to balance the budget for 10 years.

"They were kind of testing each other," said former Rep. Tom Davis, R-Va., who was a freshman in Congress at the time. Afterward, Davis noted, Clinton and Gingrich would go on to work together on a host of issues including welfare reform. The economy boomed, helping to mitigate budget issues.

Republicans who were lawmakers or aides in Congress in 1995 cite a variety of reasons that the shutdown ended. For Davis, it was the mounting public pressure on Republicans and their rapidly dropping poll numbers that helped spur a compromise. "There was a revolt, and they simply couldn't hold their members after a while," he said of the Republican leadership. It didn't help that Republicans were afraid of losing the first majority they'd had in decades. Davis recalls going to former Rep. Dick Armey, then the Republican Majority leader from Texas, and saying, "We're getting our butts kicked."

But Bob Walker, then a Republican congressman from Pennsylvania, had a different take from the conventional narrative that Republicans had caved. "We stayed focused in 1995 on the fact that what the end result for us was to get a pathway to a balanced budget, and so in the end when we got an agreement to just begin the process of moving toward a balanced budget," he said. "We declared victory on that and we were prepared to then get the government back into action."

This time, it's not so easy for Republicans to achieve even a piece of their chief goal - to dismantle the Affordable Care Act. The law is President Obama's signature policy achievement, and its constitutional authority was affirmed by the Supreme Court. Democrats in the Senate and Mr. Obama himself have proven with the shutdown fight that they are determined to keep the law intact.

"We didn't get an immediate balanced budget obviously but what we got was a seven-year plan toward a balanced budget that then ended up being accomplished in there years," Walker said of the House Republicans in 1995. But nowadays, he said, "I'm not certain I see where the bottom lines are."

Yet another explanation of why the 1995-1996 shutdown ended had to do with presidential politics. Former Senate Majority Leader Bob Dole, R-Kansas, was eyeing a presidential bid against Clinton in 1996.

"He just got sick of it. I think he started seeing that this was directly impacting his ability to run for president," said John Feehery, a political strategist who was the communications director for then-House Majority Whip Tom DeLay during the shutdown. Dole was key to engineering an end to the shutdown, a fact that was apparent to everyone - even Democrats.

"It was a huge factor," said American University professor Patrick Griffin, who served as Clinton's assistant for legislative affairs from 1994 to 1996. "We could always sense that there was no love lost between him and [Gingrich] - on the [Contract with America], on the shutdown. It was just not Dole's style...he was wasting time, he was not being able to get his campaign."

If anything, presidential politics will lengthen the shutdown. Mr. Obama has no re-election campaign to worry about - like Clinton did at the time - and Republican presidential campaigns cannot be won without pleasing an active base that hates the healthcare law. It would be difficult for any Republican to help broker a compromise that preserved most of Obamacare and then woo Republican primary voters.

Not that many Republicans feel as if they can work with Mr. Obama. "Many people in Congress ...believe that the president treats them with contempt and so the atmosphere for negotiating is not very good. That's a big difference," said Walker.

House Speaker John Boehner, R-Ohio, and Mr. Obama have tried and failed to negotiate big deals several times. Since the government shut down on Tuesday, they've barely talked aside from a meeting the president held with top congressional leaders Wednesday afternoon. And a recent Politico story that detailed how Boehner and Senate Majority Leader Harry Reid, R-Nev., worked together to preserve congressional subsidies for healthcare coverage will likely have poisoned the well between the leaders of the two chambers.

That wasn't the case with Gingrich and Clinton, despite their differences. "Both President Clinton and Speaker Gingrich had a pretty civil and reasonably good personal relationship," said Mack McLarty, Clinton's first chief of staff as president. Both hailed from the south, and had "very inquisitive minds" about the world around them.

Perhaps the biggest roadblock to a deal, however, is the increasingly partisan nature of Congress caused by congressional redistricting that puts many members into seats where fewer and fewer constituents are from the opposite party. In 1995, more than 34 percent of Republican representatives in the House were elected in districts that had voted for Clinton as president. Now, only seven percent of House members come from districts that voted for Mr. Obama.

There's a larger proportion of hardline conservatives in the House in 2013, and they have so far been more successful at driving the agenda than their more moderate counterparts. "The-rank-and-file members are sick and tired of the rebels running the thing but there's too many of them who vote with the rebels to protect their flank," Feehery said, referring to Republicans who are worried about receiving a primary challenge from the right.

With so many factors working against a deal, it's hard to see a way out of the crisis. The only thing that's guaranteed to inject some urgency into the debate is the looming deadline to raise the debt ceiling on Oct. 17. While a government shutdown can have minimal effects on the financial markets, the possibility of the U.S. defaulting is much more likely to cause financial panic that could push lawmakers into a deal.

Plus, if the spending and debt ceiling deals morph into one, there may be more issues on the table to discuss such as the sequester and the whole federal budget. That, Walker said, will give Republicans more areas where they can look for victory.