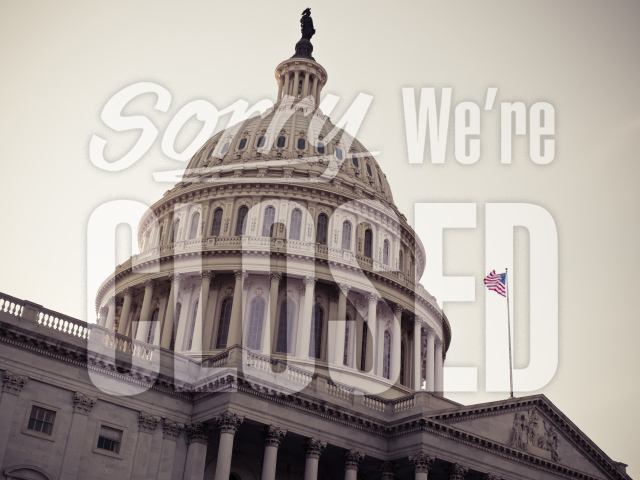 Republicans so far are keeping up their demand to revisit the Obamacare debate in the government spending debate, even though polls show most disagree with the strategy -- and even as several hundred thousand federal employees are going without a paycheck and some critical government services like food assistance are threatened.

The GOP's strategy may not be popular, but it's arguably the predictable move for House Republicans interested in self-preservation.

Republicans won the House majority in 2010 on a crest of tea party anger against Democratic rule -- particularly against President Obama's health care law. Some of those Republicans, in fact -- like Rep. Lynn Westmoreland, R-Ga., and Sen. Mike Lee, R-Utah -- campaigned in 2010 on the promise to make dramatic changes in Washington or shut the government down.

In 2012, nine in 10 congressmen seeking re-election did so successfully. In the 2014 election so far, there are just about 40 truly competitive House seats, according to Sabato's Crystal Ball, the elections analysis site run by University of Virginia political scientist Larry Sabato. That means the vast majority of lawmakers will face more political competition during the primary process than the next general election.

"Not only are their seats safe, but their support of this shutdown and the attempt to defund Obamacare is their guarantee to reelection," Sabato told CBSNews.com. "The vast majority are in heavily Republican districts, so general public opinion may be completely against them, but this is actually good for them."

There are some House Republicans who could suffer politically if the shutdown continues -- particularly the 17 who represent districts that Mr. Obama carried in the 2012 election. Six of those congressmen are among the handful of Republicans who've said they'd support Democratic efforts to pass a spending bill without any Obamacare conditions -- they include Reps. Peter King of New York, Michael Grimm of New York, Scott Rigell of Virginia, Jon Runyan of New Jersey, Frank LoBiondo of New Jersey, and Erik Paulsen of Minnesota.

If he wanted to, House Speaker John Boehner, R-Ohio, could put the Senate-passed bill on the floor that would re-open the government for a few more months without any conditions. So far, however, tea party-aligned Republicans have put more pressure on Boehner than House moderates.

Many congressmen who support a clean spending bill (called a continuing resolution) think that if a clean bill were put up for a vote, more than 100 Republicans would vote yes, CBS News' Nancy Cordes reports from Capitol Hill. But unless more of them go public with that position, Boehner won't be compelled to undertake a change in strategy.

The pressure to vote on a clean bill is likely to build as the shutdown drags on. On Wednesday, bank CEOs -- the sort of deep-pocketed, potential campaign supporters that politicians listen to -- came to Washington to warn leaders that they're current stalemate could harm the economy. Public outrage could also build, and as speaker of the House, Boehner has a vested interest in getting those few dozen vulnerable Republicans re-elected.

"If this goes through to the debt ceiling... the total cost to the taxpayers and the economy and to America's world image will have been great, and somebody's going to pay the bill for that," Sabato said. "And usually it's in an election."

A Quinnipiac poll released this week did show that American voters favor a generic Democrat on the 2014 ballot over a generic Republican by nine points -- the widest Democratic margin so far in this cycle. That said, a generic ballot like that should be taken with a large grain of salt. In 2012, House Democrats actually won 1.36 million more votes than Republicans, but it didn't matter because of the way districts are gerrymandered.

William Dougan, national president of the National Federation of Federal Employees, said to CBSNews.com that he doesn't expect House Republicans to really get the message of the severity of the shutdown until they hear from more constituents -- which may take more government services being denied.

"I think the only way it's going to change is if the American public is made aware of exactly what services their government does provide," Dougan said. "A lot of us take those services for granted, and we don't even think about who delivers my mail, how do my roads get fixed, or how can I be sure that the meat I buy in the supermarket is safe to eat?"

The federal employees that Dougan represents are all too aware of the consequences. Around 800,000 federal workers, who make an average salary between 25,000 and 75,000 a year, have been furloughed without pay during the shutdown. This furlough comes on top of other furloughs they've seen this year because of budget cuts.

Members of Congress, meanwhile, still get their six-figure paychecks during a shutdown because the 27th Amendment prohibits any session of Congress from changing its own pay. To the members of Congress who have offered to give up their pay during the shutdown, Dougan suggests they donate their paychecks to the Federal Employees Education and Assistance Fund, a nonprofit that gives grants and no-interest loans to financially-strapped federal workers.

"This current set of furloughs could be the straw that breaks the camel's back for some of these folks," he said.