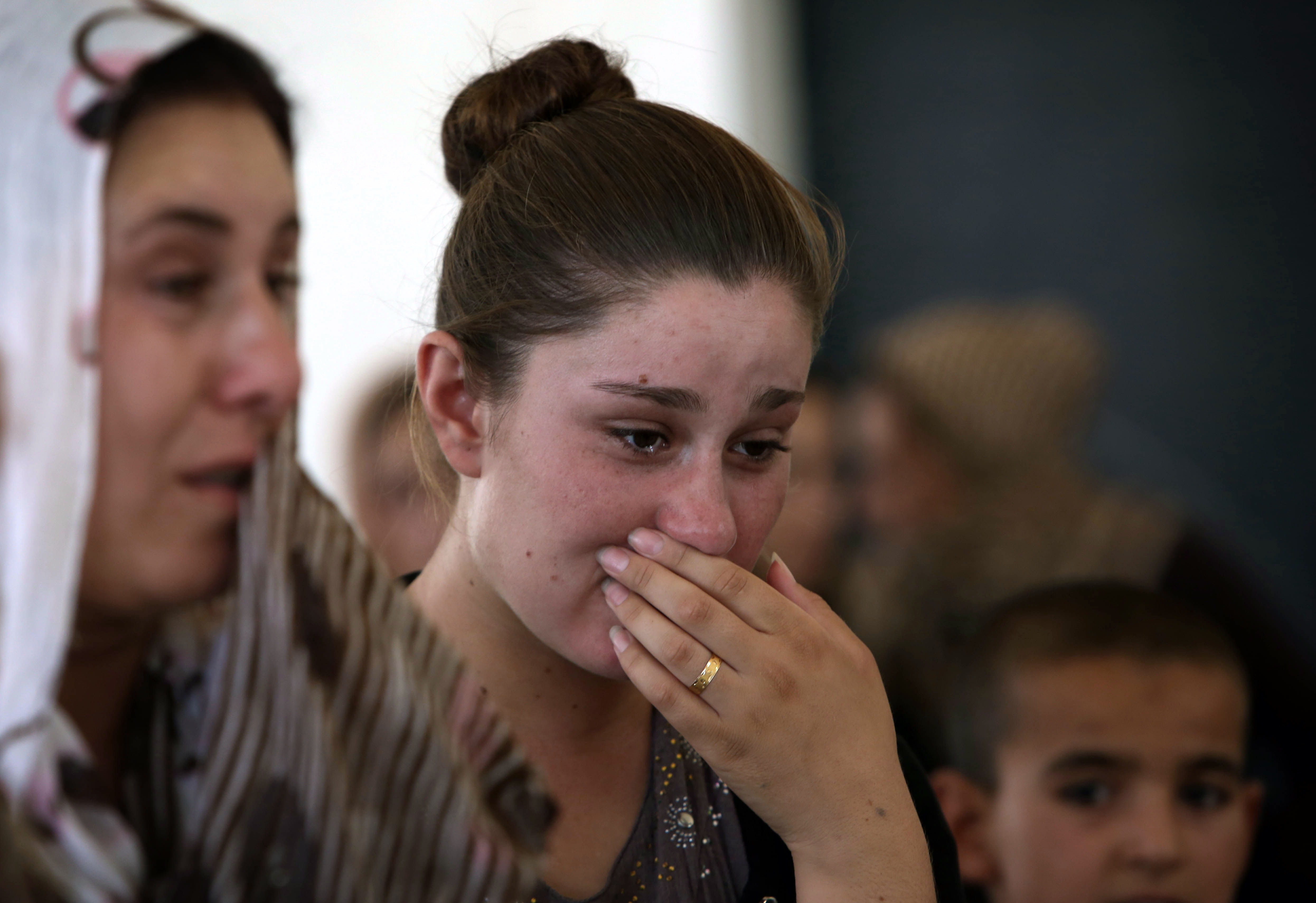 President Obama has ordered air drops of humanitarian aid for a besieged religious minority in Iraq and is considering air strikes against the militants threatening them in northern Iraq, CBS News correspondent David Martin reports. The air drop effort is under way and the planes have taken off.

The advance the Islamic State of Iraq and Syria (ISIS) in northern Iraq has forced thousands of civilians to flee their homes. An estimated 15,000 members of a religious sect know as the Yazidi are stranded on a mountain surrounded by militants threatening to kill them if they do not convert to Islam.

In addition, the militants are reportedly just 25 miles from Erbil, where some 150 American military advisers and an unknown number of diplomats have been operating. The city was once thought to be safe from attack.

ISIS, which has rebranded itself as the Islamic State, issued an ultimatum to tens of thousands of people from the Yazidi community on Saturday to convert to Islam, pay a religious fine, flee their homes or face death. Yazidis follow an ancient religion with links to Zoroastrianism and the Islamic State regards the Yazidis as "devil-worshippers," according to Reuters.

While the White House did not publicly outline the range of options under consideration, White House press secretary Josh Earnest said Thursday that the "situation is nearing a humanitarian catastrophe. We are gravely concerned for their health and safety."

Even as the White House weighed potential military options, Earnest said Obama would stand by his pledge to not put U.S. combat troops back on the ground in Iraq. "There are no American military solutions to the problems in Iraq," he said.

About 150 Yazidis were admitted into Turkey on Thursday, Reuters reported.

"Those who have passports crossed the border, but thousands of people who don't are waiting at the other side," said Seyfettin Aydemir, mayor of Sirnak's Silopi district, according to Reuters. "We're in talks with regional lawmakers about the situation."

The U.N. Security Council warned Tuesday that the Islamic State may be held accountable for crimes against humanity for its systematic persecution of minorities in Iraq.

The council condemned the Islamic State group and associated armed groups "in the strongest terms" for attacking and killing minorities, including Christians, as well as Iraqis who oppose their "extremist ideology."

The radical Islamist militants went on a lightning offensive last month, crossing from territory they hold in Syria and capturing a large swath of northern and western Iraq, in cooperation with local Sunnis who have long distrusted Iraq's Shiite dominated government.

The Security Council said in a press statement approved by all 15 members that the group poses a threat not only to Syria and Iraq "but to regional peace, security and stability."

The council singled out the group's attacks on the strategic city of Tal Afar near the Syrian border, which it seized in June, and neighboring Sinjar, which it captured on Saturday, for condemnation.

It expressed deep concern for the hundreds of thousands of people displaced, many from vulnerable minority communities especially the Yazidis who have lived in the area for hundreds of years.

The Security Council said many Iraqis from Tal Afar and Sinjar have been forced to flee and seek refuge "while many others have been executed or kidnapped."

Meanwhile, Islamic State militants on Thursday seized Iraq's largest dam, placing them in control of enormous power and water resources and access to the river that runs through the heart of Baghdad.

The Islamic State group posted a statement online Thursday, confirming that they had taken control of the dam and vowed to continue "the march in all directions," adding that it will not "give up the great Caliphate project." The group added that it has seized a total of 17 cities, towns and targets - including the dam - over the past five days. The statement could not be verified but it was posted on a site frequently used by the group.

Halgurd Hekmat, a spokesman for the Peshmerga, told The Associated Press that clashes around the dam are ongoing and he does not know who is in control at this point in time.

The al Qaeda breakaway group has established its idea of an Islamic state in the territory it controls in Iraq and Syria, imposing its harsh interpretation of Islamic law. Iraqi government forces, Kurds and allied Sunni tribal militiamen have been struggling to dislodge the Islamic State militants and its Sunni allies with little apparent success.

Iraq's second largest dam, the Haditha Dam in the western Anbar province, has also been at risk of takeover but remains in the hands of the Iraqi military.

The Kurdish fighters, known as the peshmerga, had initially managed to stall the militant advances, but their defense has waned in recent weeks.

The seizing of dams and reservoirs gives the militants control over water and electricity that they could use to help build support in the territory they now rule by providing the scarce resources to residents. Or they could sell the resources as a lucrative source of revenue.

There are also fears the militants could release the waters of the dam and devastate the country all the way down to the capital Baghdad, though maintaining the dam's power and water supplies will be key to their attempts to build a state.

Late Wednesday, militants overran a cluster of predominantly Christian villages alongside the country's semi-autonomous Kurdish region, sending tens of thousands of civilians and Kurdish fighters fleeing from the area, several priests in northern Iraq said Thursday. The capture of Qaraqoush, Iraq's biggest Christian village, and at least four other nearby hamlets, brings the Islamic State to the very edge of the Iraqi Kurdish territory and its regional capital, Irbil.

On Monday, Prime Minister Nouri al-Maliki ordered the Iraqi air force to provide aerial support to the Kurds, in a rare show of cooperation between Baghdad and the Kurdish regional government that underscored the serious nature of this crisis.

The French government on Thursday called for an emergency meeting by the United Nations Security Council to address the advances of the Islamic State militants and "the intolerable abuses committed," and asked that the international community mobilizes itself against the threat.

Even as Sunni militants have been taking control of territory in the north and west of the country, Baghdad has been increasingly targeted by car bombs, with a string of explosions killing at least 83 people in the last two days.

Iraqi officials said in two separate incidents on Thursday, drivers rammed cars packed with explosives into police checkpoints in the northern, predominantly Shiite district of Kazimiyah killing a total of 32 people, most of them civilians, and wounding dozens.

Medical officials confirmed the toll. All officials spoke on condition of anonymity as they were not authorized to release information.

A roadside bomb also went off west of Baghdad in the suburb of Abu Ghraib, killing two soldiers.