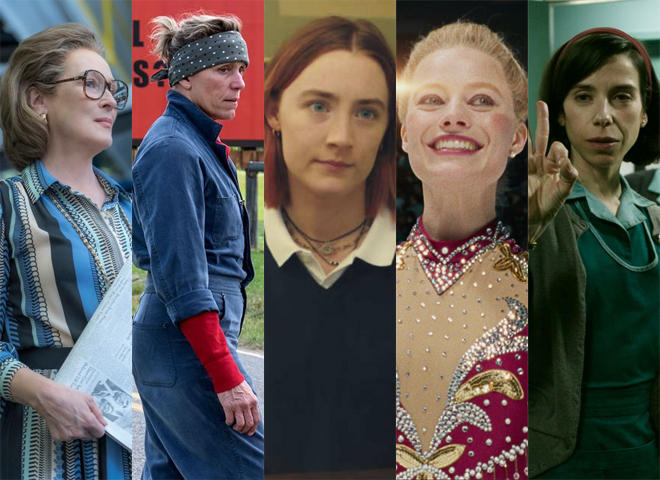 Check out clips below of the five nominees for this year's Academy Award for Best Actress.

Sally Hawkins, "The Shape of Water"

Sally Hawkins, previously nominated for Best Supporting Actress for "Blue Jasmine" (and robbed of a nomination for "Happy-Go-Lucky"), brought a winsome innocence to her not-so-very-innocent character Elisa in Guillermo del Toro's romantic fable/sci-fi story, "The Shape of Water." As a mute cleaning woman whose scars suggest a difficult life, her fascination with a bizarre creature taken from an Amazonian river and kept at a secret government facility transports her from a solitary existence into an erotically-charged quest to aid the creature's escape.

Is it love? Whatever. It IS rated R. Still, Hawkins has to communicate entirely through facial expression, movement, and the occasional sign language, which puts her at a distinct advantage given the film's fantastical elements. After all, trying to put a screenwriter's words to the emotions evoked might just make it normal -- and that's something del Toro's film definitely is not.

An Oscar-winner for her delightful turn as pregnant police officer Marge Gunderson in the Coen Brothers' "Fargo," Frances McDormand is nominated for a much darker character -- a woman who seeks justice for her murdered daughter and, barring that, a measure of vengeance -- in "Three Billboards Outside Ebbing, Missouri."

The bitterness and obstinance of her Mildred Hayes infects everyone in her community, from the police she goads into maintaining a credible manhunt, to the press who dutifully report on her outlandish public displays. Her family, meanwhile, suffers as Mildred becomes a pariah for her actions.

In this clip, we register the attitude of her son, Robbie (Lucas Hedges), who must carry on while his mom walks a very solitary road.

The faux-documentary "I, Tonya" is a terrific blend of narrative styles as it tells the story of an American Tragi-Comedy: the rise and fall of Olympic skater Tonya Harding and the dastardly assault on her rival Nancy Kerrigan. The performance of Margot Robbie as Harding perfectly captures the skater's ambition and chip-on-the-shoulder attitude, and dares the audience to admit its complicity in the media circus that her life would become, once Kerrigan's leg gets whacked.

In the film's opening scene, we are introduced to Harding's hardscrabble origins, and to Tonya, years after the fact, defiantly reflecting to an off-screen interviewer about her unapologetic life.

As an added treat, in this informative New York Times video, director Craig Gillespie discusses how a skating competition scene was done, with Robbie skating much of it herself (special effects artists did replace the head of a skater doing more complex moves) -- and kudos to the skating Steadicam operator! Like Ginger Rogers dancing backwards in high heels, the cameraperson had to dance backwards on skates!

It is remarkable that Saoirse Ronan, who first came to attention playing a complicated teenager in the 2007 film "Atonement," is still playing complicated teenagers a decade later. But she does it beautifully in Greta Gerwig's "Lady Bird," which dramatizes in moments large and small a year in the life of a high school senior in Sacramento. She's earned her third Academy Award nomination.

Ronan's age in fact aids her performance, by bringing a well-spring of emotion and nostalgia for Lady Bird's testing of wings to leave the family nest that both underlines her vibrant youthfulness and callow impatience with other people, and magnifies her sensitivity and affection.

In this scene, she flirtatiously encounters Kyle (Timothée Chalamet), with whom she will share some quality time that will, when she's older, be remembered as a folly of youth.

Another year, another Oscar nomination for Meryl Streep. It's easy to feel blasé when she holds the record for an actor, with 21 nominations. (She's won three times, most recently for "The Iron Lady.") But the sheer breadth of her work and her remarkable talent cannot be overstated. And that is particularly true of her performance as Katherine Graham, owner of the Washington Post, in Steven Spielberg's "The Post."

After coming into her position following the death of her husband, to become that rare female business executive in the late 1960s and early '70s, Graham is uncertain and deferential to the more experienced men in her firm – and nervous about a financial undertaking that will leave her and her family business exposed. And right at that moment, her paper becomes embroiled in the unfolding Pentagon Papers scandal, potentially exposing herself and her reporters to jail.

In any other film Graham's character development might be seen simply as a blossoming feminist -- a sign of the turbulent times -- but in Streep's fine performance we see her personal, internal growth, stepping outside of her familiar and comfortable traditions to protect her business as thoughtfully and valiantly as a mother would protect her children -- and at the same time, review her position of status in the nation's capital as a hostess to the rich and powerful.

In this scene she discusses the leak with her editor in chief Ben Bradlee (Tom Hanks), who questions her ability to remain impartial in a company town.