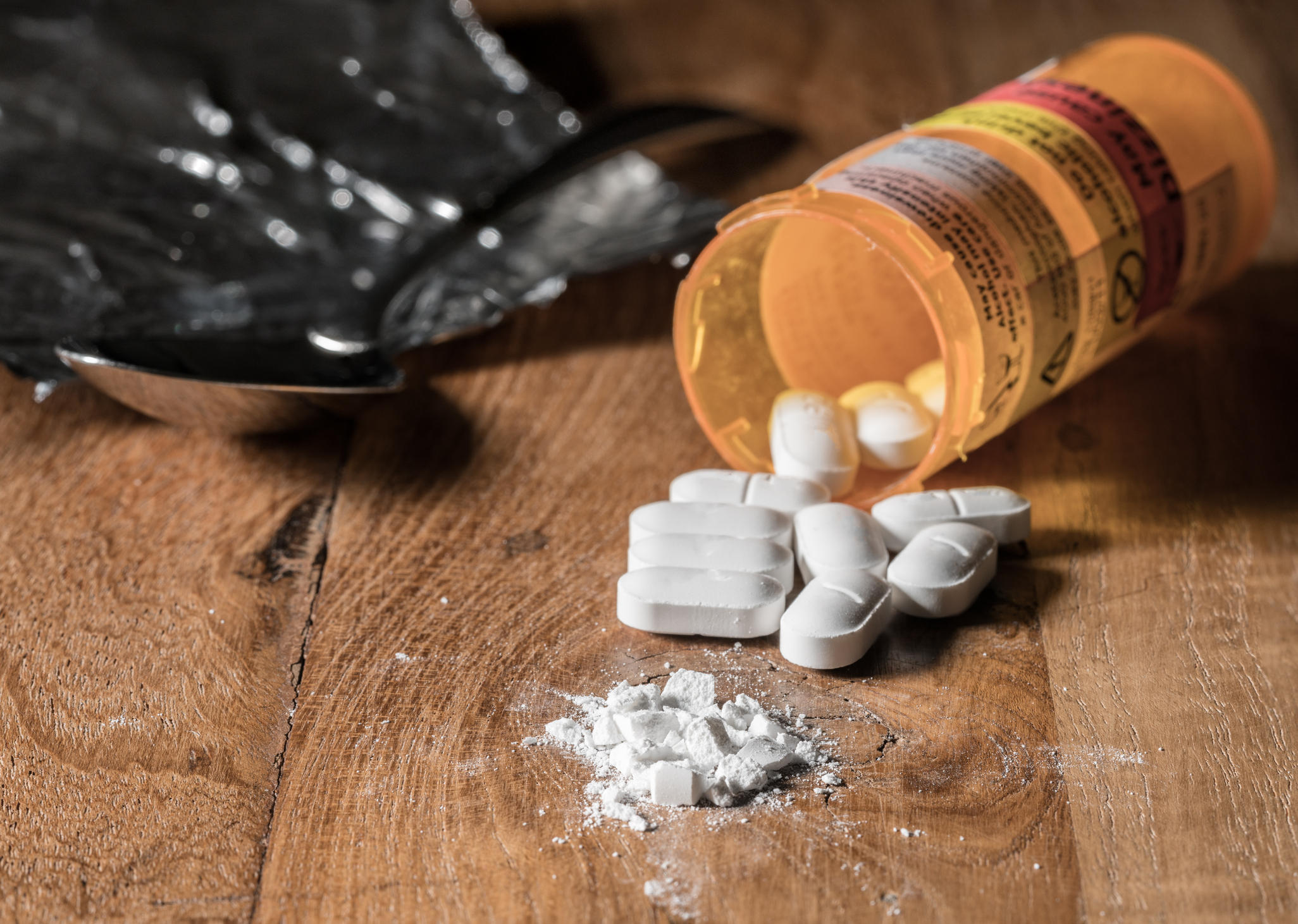 NEW YORK — While declaring the opioid crisis a national public health emergency Thursday, President Donald Trump said: "Nobody has seen anything like what's going on now."

He was right, and he was wrong.

Yes, this is the most widespread and deadly drug crisis in the nation's history. But there has been a long string of other such epidemics, each sharing chilling similarities with today's unfolding tragedy.

There was an outbreak after the Civil War when soldiers and others became addicted to a new pharmaceutical called morphine, one of the first of many man-made opioids. There was another in the early 1900s after a different drug was developed to help "cure" morphine addiction. It was called heroin.

Cocaine was also developed by drugmakers and sold to help morphine addiction. It cleared nasal passages, too, and became the official remedy of the Hay Fever Association. In 1910, President William H. Taft told Congress that cocaine was the most serious drug problem the nation had ever faced.

Over the next century, abuse outbreaks of cocaine, heroin, and other drugs like methamphetamine, marketed as a diet drug, would emerge and then fall back.

"There are one or two or three wolves ahead of the pack that seem to be the most pressing threat, their jaws closest to you," said David Courtwright, a University of North Florida historian who has written books on U.S. drug epidemics. "But there's always a pack. The history is that the lead wolves keep shifting."

Trump vowed in his recent remarks "we will free our nation from the terrible affliction of drug abuse." But the grim reality is that these drugs never disappear completely once they've emerged.

The good news, though, is that drug epidemics do fade considerably — usually because reduced supply and demand eventually diminish the number of new addictions, experts say. And that history offers some hope for the future.

Most U.S. drug epidemics over the past two centuries were sparked by pharmaceutical companies and physicians pushing products that gradually proved to be addictive and dangerous. In the 1800s the drug was often opium, usually sold as a liquid in products like laudanum, and given to patients for pain or trouble sleeping. Mary Todd Lincoln, President Lincoln's wife, took it for headaches and became addicted.

The drug was also used to get high. "Opium fiends" smoked it in opium dens like those in San Francisco's Chinatown. Rev. Frederick Masters, a 19th century Methodist missionary, described opium dens in that city as dark, fumy basements "sepulcher-like in their silence save for the sputtering of opium pipes or the heavy breathing of their sleeping victims."

The young nation's drug problem grew because of morphine, a painkiller derived from opium through a chemical process that was perfected by E. Merck & Company of Germany. It made battlefield injuries more bearable for Civil War soldiers, but so many veterans got hooked that morphine addiction was sometimes called "the army disease."

It would get worse. Cocaine and heroin were soon developed — in part to help morphine addiction.

Merck introduced cocaine, which became a prime ingredient in a variety of over-the-counter tonics for sinus problems and other ailments. Because of its energizing effects, beverage makers put it in their wines and sodas and laborers in the South sniffed it to get through grueling work shifts.

Bayer, another German pharmaceutical company, began marketing heroin in the 1890s. It often came in pill form, without prescription, and was used to treat the flu and respiratory ailments. But it came to be sniffed — and later injected — by those looking for a more intense high or a substitute for other drugs, whether it was morphine in 1905 or opioid pain pills like Vicodin in 2015.

In the early 1900s cocaine shifted from a consumer fad into reviled epidemic, as physicians began documenting addiction problems and police chiefs linked recreational cocaine use to prostitution and violent crime. It led to the first national effort to contain a drug epidemic: In 1914, Congress passed the Harrison Act, which said cocaine and heroin could be sold only as a prescription medicine, not in over-the-counter remedies or in consumer products.

Historians believe a growing stigma attached to cocaine use was the main reason the epidemic declined, but they say enforcement of the Harrison Act — and its impact on prices — also was important. Cocaine and heroin got much more expensive when they were driven underground.

Drugs were still abused in the later years in pockets of society — cocaine use was rampant in Hollywood in the 1920s, for example. But economics and politics helped prevent large-scale epidemics for a time. The Great Depression meant few had the disposable income for an illicit drug habit, and World War II decimated the supply of drugs from overseas.

Alcohol and cigarettes were — and remain — the nation's primary addictions. Both kill far more people than drugs. But since the middle of the century, there's been wave after wave of other drug abuse outbreaks.

Amphetamines, developed in the 1930s, took off in the 1950s. Marketed by drug companies and promoted by doctors, they were used for weight loss, anxiety and depression. Methamphetamine, developed by the Burroughs Wellcome drug company, was often prescribed as a diet pill and abused by those attracted by the surge of energy it produced. Users who injected it were known as "speed freaks."

"The speed freak is, in many ways, an outcast in a society of outcasts. He is regarded as a fool by heroin addicts, as insane and violent by those using psychedelics and marijuana, and a 'bust' by non-drug using hustlers," wrote Dr. Roger Smith, a criminologist who studied drug use in San Francisco in the late 1960s.

Greater regulation of the drugs in 1970, along with the stigma attached to speed freaks, caused the drugs to recede as others became more widely used.

In the 1960s and 1970s, heroin use surged, prompted in part by Vietnam War soldiers who were exposed to it while fighting overseas. Unlike the doctor-driven previous drug epidemics, this one victimized poor inner-city neighborhoods most.

In 1970 and 1971, in New York City, more adolescents, many of them black and Puerto Rican, died of heroin-related incidents than any other cause. There was little compassion then for heroin addicts, recalled John de Miranda, a longtime addiction professional who worked with homeless men in Boston's South End in the early 1970s. "We basically cared for the men nobody else wanted to deal with," he said.

President Richard Nixon's 1971 "war on drugs" declaration kicked off a long period of attacking the drug problem with beefed up law enforcement and tougher sentences for users and dealers. The approach did cut down foreign shipments of heroin and marijuana, but those successes were temporary and many historians argue Nixon's war ultimately was a losing effort.

Heroin use faded in the late '70s, but cocaine was on its way back, first in powder form and then becoming an epidemic of crack in the 1980s when a supply glut prompted dealers to sell hardened cocaine rocks that sold for $5 to $10 on the street.

Many young thrill-seekers, wary of heroin and needles, thought crack was less dangerous because it was smoked like marijuana.

Like the heroin surge before it, crack was seen as tied to urban blight and violent crime. This triggered a new drug war, including the "this is your brain on drugs" TV spots that showed frying eggs, and harsh jail sentences for the sale and possession of crack that were far more severe than the penalties for regular cocaine.

The crack epidemic died out in the 1990s, tailing off at roughly the same time both in cities that aggressively arrested people and cities that didn't. Experts said the police crackdown contributed, but more important was society's growing repulsion to the drugs. Families and communities were shattered by crack-related murders and arrests. The drug's users came to be regarded as disgraceful "crackheads." Even risk-taking kids, looking for new highs, started to avoid crack.

In 1900, when cocaine and heroin were legal and popular, there were 250,000 Americans with a drug addiction, according to one historical estimate. That was about 1 in 300 Americans. The estimate today is 1 in 133, and the drugs are deadlier than ever.

"In all my years I've worked in the substance abuse field, I've never had so many patients die," said Joan Hartman, vice president of behavioral health services for Illinois-based Chestnut Health Systems, who has been working in treatment for three decades.

More than 64,000 Americans died from drug overdoses last year, according to the U.S. Centers for Disease Control and Prevention.

This epidemic started around 1995, kicked off by a drug called OxyContin, which like heroin and morphine before it, was meant to be a safer and more effective opioid. OxyContin and competitor drugs were designed to release the medication slowly over long periods of time, making them and supposedly safe and effective enough to use for months to treat chronic pain. But patients found themselves hooked and wanting more, and drug abusers found they could crush the tablets and snort or inject them, delivering the drug to the bloodstream much more quickly.

Aggressive marketing and distribution pushed hundreds of millions of pills into communities. Then more and more addicts turned to cheaper alternatives, bought illegally, like heroin and fentanyl, an opioid medication developed to treat intense, end-of-life pain in cancer patients that is 50 to 100 times more powerful than morphine.

OxyContin tablets at a pharmacy in Montpelier, Vt.

"It's a very complex epidemic" that is nowhere close to being over, said Dr. Anne Schuchat, the CDC's principal deputy director, in an interview earlier this year.

Lessons of the past

What has worked for previous epidemics?

The supply is often reduced by a combination of regulations, law enforcement and economics. And historians say that demand slows when drug users became so outcast that even those looking for a risky thrill or a way to escape began to stay away.

Past epidemics have also shown what doesn't work. Many experts, including some in law enforcement, say that arresting users and dealers does not seem to slow epidemics. "We cannot arrest our way out of the heroin and opioid addiction crisis," said Brian Moran, Virginia's secretary of public safety and homeland security, speaking at a federal hearing in July.

But while health experts want to urge people to shun drugs to reduce the number of new addictions, they say ostracizing the people already suffering from addiction does little to help them. It may even impede attempts to get people into treatment, Hartman said.

There appears to be some success on the first front. The number of new addictions may be receding.

A recent federal report noted a downward trend in "opioid misuse" in adults younger than 50. Prescription rates are falling, though they remain far higher than years ago. And according to a closely watched University of Michigan study of adolescents, use of the opioids OxyContin and Vicodin has been low and falling for several years. In 2016, heroin use was the lowest in the survey's 41-year history.

"I suspect we may be past the peak (of the epidemic), at least in terms of initiation," said Jonathan Caulkins, a drug policy scholar at Carnegie Mellon University.

The other two fronts — preventing deaths and treating addiction — are not so promising, despite more attention and money flowing to programs. Deaths are still rising, and University of Pittsburgh researchers estimate as many as 300,000 will die from overdoses over the next five years.

"Honestly, we're at a point where the horses are out of the barn after the gate has closed," said Dan Werb, an expert at the University of California, San Diego. "I'm not optimistic about the capacity of our classic approaches to rein this in."