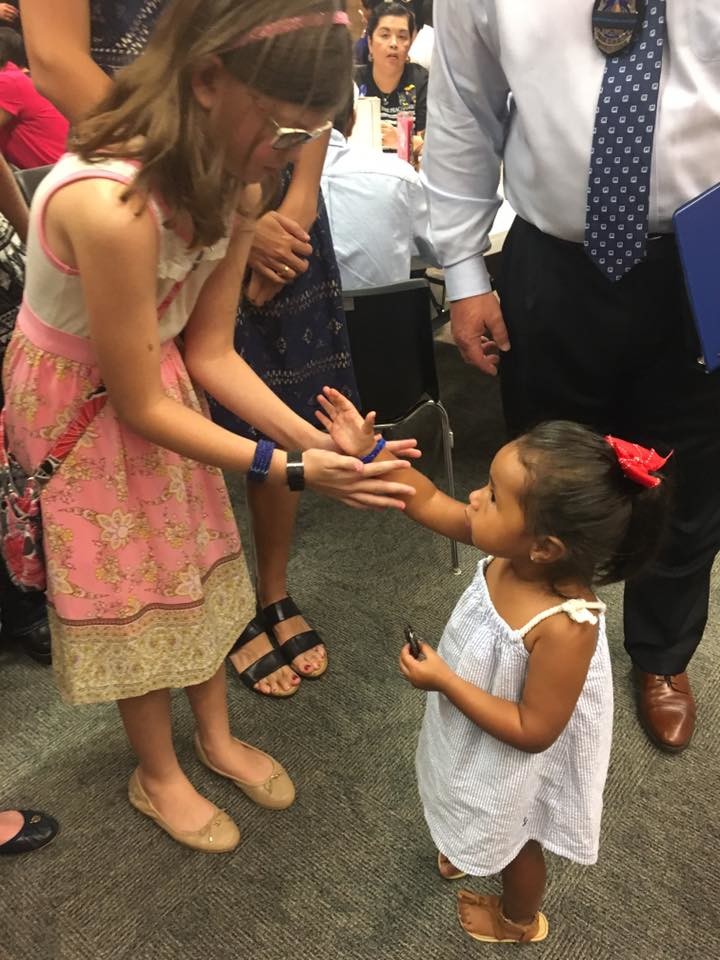 During a week of remembrance for the five officers slain in Dallas, a heartwarming image has surfaced depicting children, in the depths of their own mourning process, reaching out to support each other.

In the image, Sergeant Michael Smith's 10-year-old daughter, Caroline, gives Lyncoln, the two-year-old daughter of Officer Patrick Zamarripa, a bracelet she made as a memorial for their late fathers and the three other Dallas officers killed in the line of duty.

Smith was on the force for 25 years and was known as a "cop's cop." A former Army Ranger, he served almost three decades with the police department. In addition to Caroline, he left behind 14-year-old daughter Victoria and his wife of twenty years, Heidi.

Zamarripa, 32, served in the Navy before joining the Dallas Police Department. In addition to his daughter, he is survived by his wife, Kristy, and a stepson.

Nine other officers and two civilians were injured in a sniper attack that transformed what had been a night of peaceful protest.

At a memorial service on Tuesday, President Obama praised the five officers who, he said, were killed while "upholding the constitutional rights of this country."

He asked Americans to think critically about this moment and come together as one nation, despite profound divisions.

"We see all this and it's hard not to think, sometimes, that the center won't hold and that things could get worse," he said. "I understand. I understand how Americans are feeling. But Dallas, I'm here to say we must reject such despair. I'm here to insist that we are not as divided as we seem, and I know that because I know America. I know how far we've come against impossible odds."