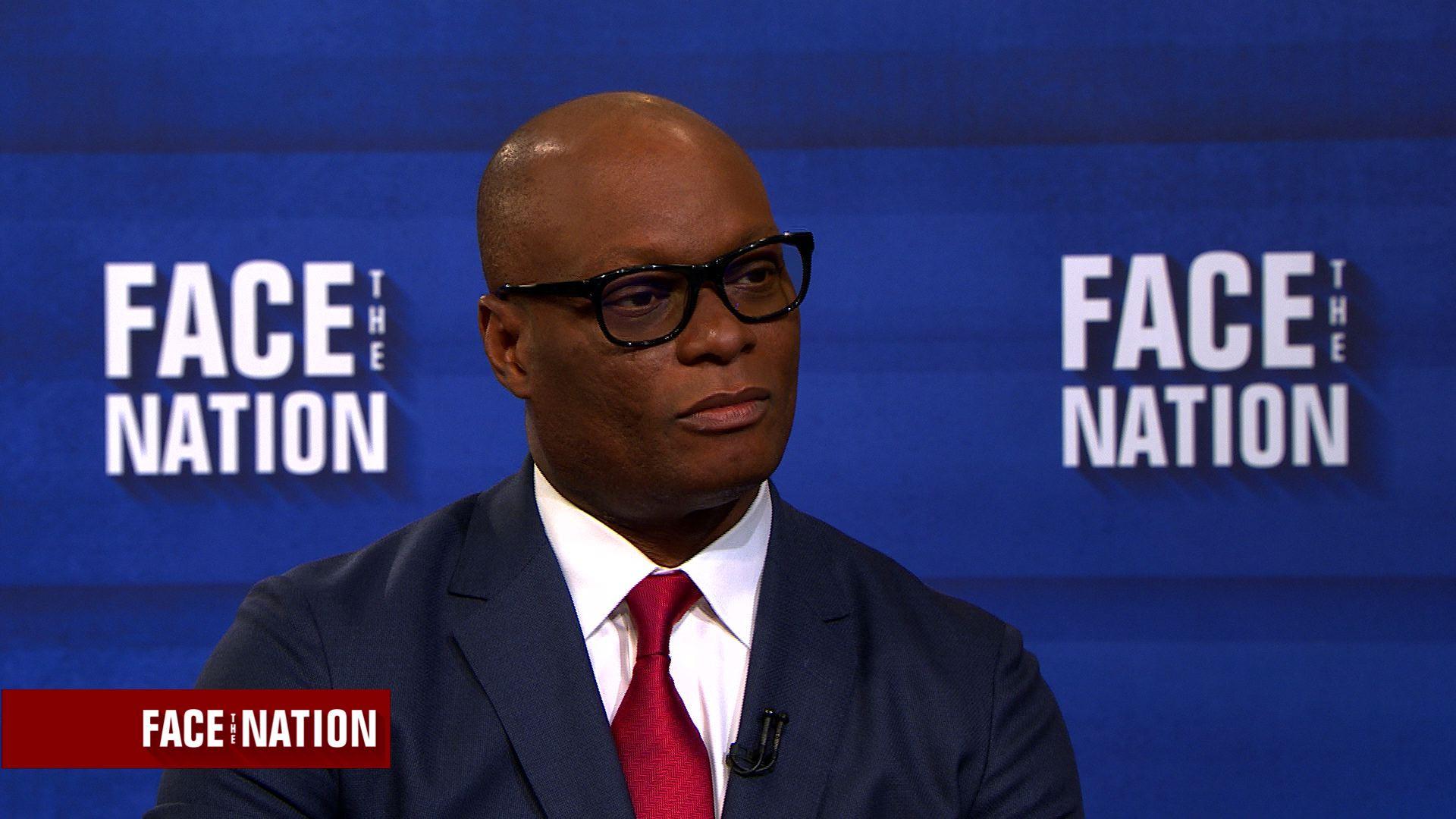 "Face the Nation" sat down with former Dallas Police Chief David Brown on Sunday, a year after five officers on his force were targeted and killed.

We spoke to Brown about what he took away from that searing experience, and we discussed what his new book, "Called to Rise," can tell us about what life as a police officer is like.

JOHN DICKERSON: Welcome back to "Face the Nation." I'm John Dickerson. It's been a year since 12 Dallas police officers were shot by a sniper, five of them fatally, at demonstrations against the use of excessive force by a police officer. Tributes were held around the country Friday in honor of those lost. We're honored to welcome former Dallas Police Chief David Brown. He's written a book. It's called "Called to Rise." Welcome Chief. I want to start with a year ago what you said after the shooting. You said that society's asking the police to do too much. Is that still true?

DAVID BROWN: It's still true. You know, when a third of our prison population suffer from mental health issues. And basically the prisons aren't meant to be mental health providers. And that translates to cops having to deal with people who are mentally ill. Who- We don't have the training for that. And we just kind of by default take on that task.

JOHN DICKERSON: Have any police answered this call that you put out a year ago or legislators? I mean, have they heard you? Are there places where police departments are - are getting the load lifted off them because people recognize the point that you've made?

DAVID BROWN: John, it seems that every time we see some progress take a step there are two steps we take back with another viral video or a court proceeding that didn't end in the way that I think the public expected. And so we stay divided in this conversation about the role of policing in the 21st century and particularly in communities of color.

JOHN DICKERSON: Your book is such an insight into what life as a police officer is like. And I want to get to that in a minute. But since you raised the viral videos and the news events, and what do you say to those in the community, communities like the one you grew up in where people see these court rulings and they say, "You know, the policeman seems to get off free from, you know, one of these incendiary events." What's your response to that?

DAVID BROWN: That officers are willing to sacrifice their lives for these communities, that they give their all. Particularly white cops. There's still in many departments a majority white officers are - are on the police force. And they go into these communities, and they risk their lives. Just this week, we had a really bad time for policing with the officer in New York and an officer in San Antonio being shot and killed in the line of duty by, by ambush by suspects. And so there - there's no question that the cop on the beat is sacrificing and - and committing their life to protect all of us, you know, including communities of color. But at the same time, and I don't think there's a contradiction in saying that communities of color do get treated differently by those few officers that don't deserve to be in the profession. And there's a small number. But for these communities, this becomes their world view.

JOHN DICKERSON: First from the side of the police. One of the stories you tell in - in your book about the mindset of what it's like to be a police officer, where you see threats where regular civilians don't. And I love the story you told about your mentor that you still had lunch with, a veteran, a retired police officer, and why he chooses to sit the way he does.

DAVID BROWN: Right. So cops deal in possibilities obviously. And we obviously can be perceived as very paranoid about what's happening. Even at a restaurant at dinner with a friend, we want to sit with our backs where we're facing the door and can see who's coming in. Even though retired cops, a 80-year-old gentleman I have lunch with, he's always the first inside so he can have that perfect seat. And he's been retired long and again, it is the paranoia, almost a hyper vigilance that's required to make it through your shift, to stay alive as a cop.

JOHN DICKERSON: So that's the mindset people need to learn that police have to do their job. How do police learn about the mindset of the community? What's the solution there in terms of getting, you know, to walk in the other person's shoes? How do you solve that?

DAVID BROWN: I'm a big proponent. In my book I describe how I transformed to a community-oriented policing type of police chief. Because without the community, we cannot be successful in the best ways to protect it. Because the community's priorities should be the police department's priorities. We're public servants. We should be serving these communities.

JOHN DICKERSON: Yes, you've got the kitchen - the operation Kitchen Sink. You were skeptical though at first about community policing.

DAVID BROWN: Very much so. Actually, kicking and screaming I went to a community policing assignment. I was hired on in 1983. This was the war on drugs, the height of the mass incarcerations. So I came into the profession believing that, you know, "Let's put them all in jail and let God sort them out." And what I understood later as I matured in the profession is that there is only so much jail bed space and that mass incarceration is not first affordable nor is it smart because you have to make a distinction between people who are mentally ill, drug addicted so we can have space in jail for people who are truly violent, and would hurt all of us, and need to be in jail. But if you mix them all in the same bag, you don't have enough jail space. It's just not practical to do that.

JOHN DICKERSON: And the only way to really figure that all out is if you're there day-to-day having these kind of relationships where you see people where they live before there's a crisis.

DAVID BROWN: Right. I try to say things to cops and to citizens like this. Policing is the people business. It's not the enforcement business. And -  and if you take away people from this formula, you lose the very nature of what policing is supposed to be about. We're supposed to be protecting people.

JOHN DICKERSON: The number of shootings of police officers is up. What's your sense of what's happening right now in the relationship? You write also in your book about how both after Columbine and your own experience, I think it was Arizona Street--

JOHN DICKERSON: --where the firepower you were facing was of a different kind.

DAVID BROWN: I think we've taken two steps back when it comes to the safety of our police officers. They don't feel supported. And I'm also encouraged though that there are numbers of citizens who openly express that they support police officers. And that's not giving the cops who don't deserve to be in the job a pass. We still need to be held accountable. But the vast majority of cops do the job the right way and they deserve our support.

JOHN DICKERSON: There was a Pew study at the beginning of the year that found that 72% of police interviewed said their colleagues are now more hesitant because of that, what you described. Before we go, I want you to tell one last story, which is about an experience you had that changed your life when you were young about a guy named Mike. Tell people that story.

DAVID BROWN: Yes, Mike Shillingburg. Real quick story. In sixth grade I was part of busing, desegregation in this country. And I was bused to an all-white school. Mike Shillingburg was a white kid. And obviously you can tell I'm black. And we were both 11 years old. And he invited me home for dinner because he saw the difficulties I was having in school. And that transformed my world view of race. Because Mike's mom brought out two pot pies. And we sat and had dinner. And we became best friends. We're friends today. And God knows what I would be thinking about people if Mike hadn't invited me home for dinner. So, again, my takeaway is see you at dinner. Let's not be so divided.

JOHN DICKERSON: All right. Chief Brown, thank you so much for being with us.