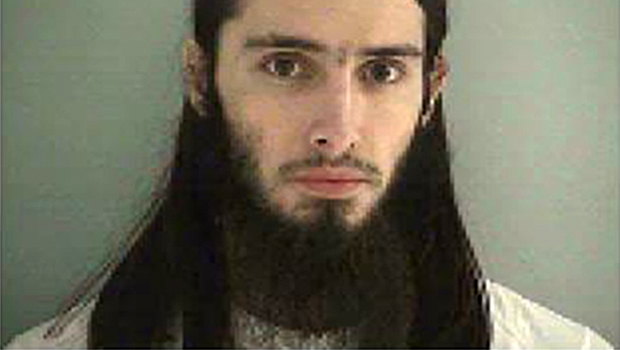 CINCINNATI -- Federal authorities say an Ohio man planned to attack the U.S. Capitol in support of the Islamic State of Iraq and Syria (ISIS) during President Barack Obama's 2015 State of the Union address.

That timing was disclosed Monday during a hearing in which Christopher Lee Cornell, 22, pleaded guilty to three federal charges, including offering material support to a foreign terrorist organization. He also pleaded guilty to attempted murder of U.S. officials and employees and a firearms charge.

Prosecutors plan to drop a fourth charge at sentencing scheduled for Oct. 31. They will seek a maximum 30 years in prison.

The FBI arrested Cornell in January 2015 outside a suburban gun shop where they said he had just bought two M-15 assault weapons and ammunition. They said previously he planned also to attack with pipe bombs.

Cornell had previously pleaded not guilty and his father claimed he was misled by "a snitch."

U.S. District Judge Sandra Beckwith scheduled sentencing for Oct. 31. Prosecutors say they will ask for a maximum prison sentence of 30 years. Beckwith ruled in April that Cornell was competent to stand trial after his attorneys questioned his mental state.

Last year, Cornell called a television station from jail and said if he hadn't been arrested he would have gone to Washington and shot President Barack Obama in the head.

WXIX-TV in Cincinnati said Christopher Lee Cornell, 20, called the station from the Kentucky jail where he's being held.

The station aired part of the interview hours after Cornell's attorney argued unsuccessfully in court that it could violate the defendant's right to a fair trial.

Cornell, asked by the interviewer what he would have done had he not been arrested in January, said he would have taken one of his guns, "I would have put it to Obama's head, I would have pulled the trigger, then I would unleash more bullets on the Senate and House of Representative members, and I would have attacked the Israeli embassy and various other buildings."

Cornell, who repeatedly identified himself as Muslim, said he wanted to carry out the attack because of "the continued American aggression against our people and the fact that America, specifically President Obama, wants to wage war against Islamic State."

He said: "They might say I'm a terrorist, but you know we see American troops as terrorists as well, coming to our land, stealing our resources and killing our people, raping our women."

Cornell, 20, grew up in the Cincinnati suburbs and still lived with his parents. He said support for ISIS in the U.S. is widespread.

"We're here in Ohio. We're in every state," he said. "We're more organized than you think."

At times what seemed like a nervous chuckle punctuated his responses. He said he would do whatever ISIS asked of him, including beheading Americans, and predicted "there will be many, many attacks."