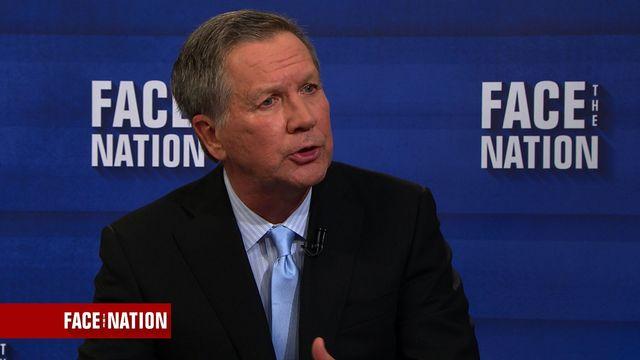 As Republicans try to figure out how to repeal the Affordable Care Act, Ohio Gov. John Kasich says they’ll encounter “a problem” passing replacement legislation with some House conservatives if it still includes any vestiges of the original law. Because of that, he said, the GOP will need to reach out to Democrats to be successful.

Kasich was asked whether he agreed with former House Speaker John Boehner’s recent characterization of the issue: “Most of the Affordable Care Act, in the framework, is going to stay there,” Boehner said, adding that Republicans are “basically going to fix the flaws and put a more conservative box around it.”

But that won’t necessarily work given the hardline position of some House conservatives who want to throw out the entire law, Kasich said, regardless of what the plan for replacement is.

“There’s going to be a problem in the House of getting anything out of there that still provides coverage to people,” Kasich told CBS’ “Face the Nation.” “That’s why the Republicans have to reach out to some of the Democrats. I don’t know whether this is going to happen.”

Kasich said it will be very difficult to get some conservative GOP House members to vote for a replacement plan if it includes any of the key components of Obamacare.

“I think there are some very conservative Republicans in the House who are going to say, ‘just get rid of the whole thing’... and that’s not acceptable when you have 20 million people, or 700,000 people in my state, because where do the mentally ill go? Where do the drug addicted go?”

Kasich said it’s a “political impossibility” for Republicans to repeal the law without a replacement.

“The fact of the matter is you can’t just repeal without repealing and replacing at the same time,” he said. “It just becomes a political impossibility and there’s no reason to do it any other way than that.”

He said the voter anger and frustration at recent town hall meetings across the country is proof that citizens are paying attention to what Congress does on the issue.

“I think it’s having an impact from the standpoint of, ‘hey, people are watching,’” Kasich said. “I don’t think they mind reform, but don’t take everything away.”

Asked about recent intelligence leaks, a topic on which President Trump has been vocal, Kasich said leaks from the House and Senate Intelligence Committees are “not acceptable.”

“When people take an oath to be secret in the Intelligence Committee, which is the committee that doesn’t get any publicity, thank goodness -- but it’s the committee that’s at the root of the security of our country,” he said. “When people leak there, they need to really be held accountable...  leaks are not acceptable out of the Intelligence Committee.”

Kasich, who met Mr. Trump on Friday, said he was pleased that the president “responded very positively to a number of the ideas” he presented.  Kasich said he wants Mr. Trump to succeed, despite his past criticism of the president.

“I’m on a plane and he’s the pilot and, you know, the fact is I want the pilot to be successful,” he said. “But you know what, every once in a while -- I was thinking about this last night, you need to yell into the cockpit.”

“My job is when you do a good job, praise you,” Kasich continued, “and when do something I don’t agree with -- and I feel compelled, I’m going to speak out.”

Dr. Deborah Birx on politics of the pandemic