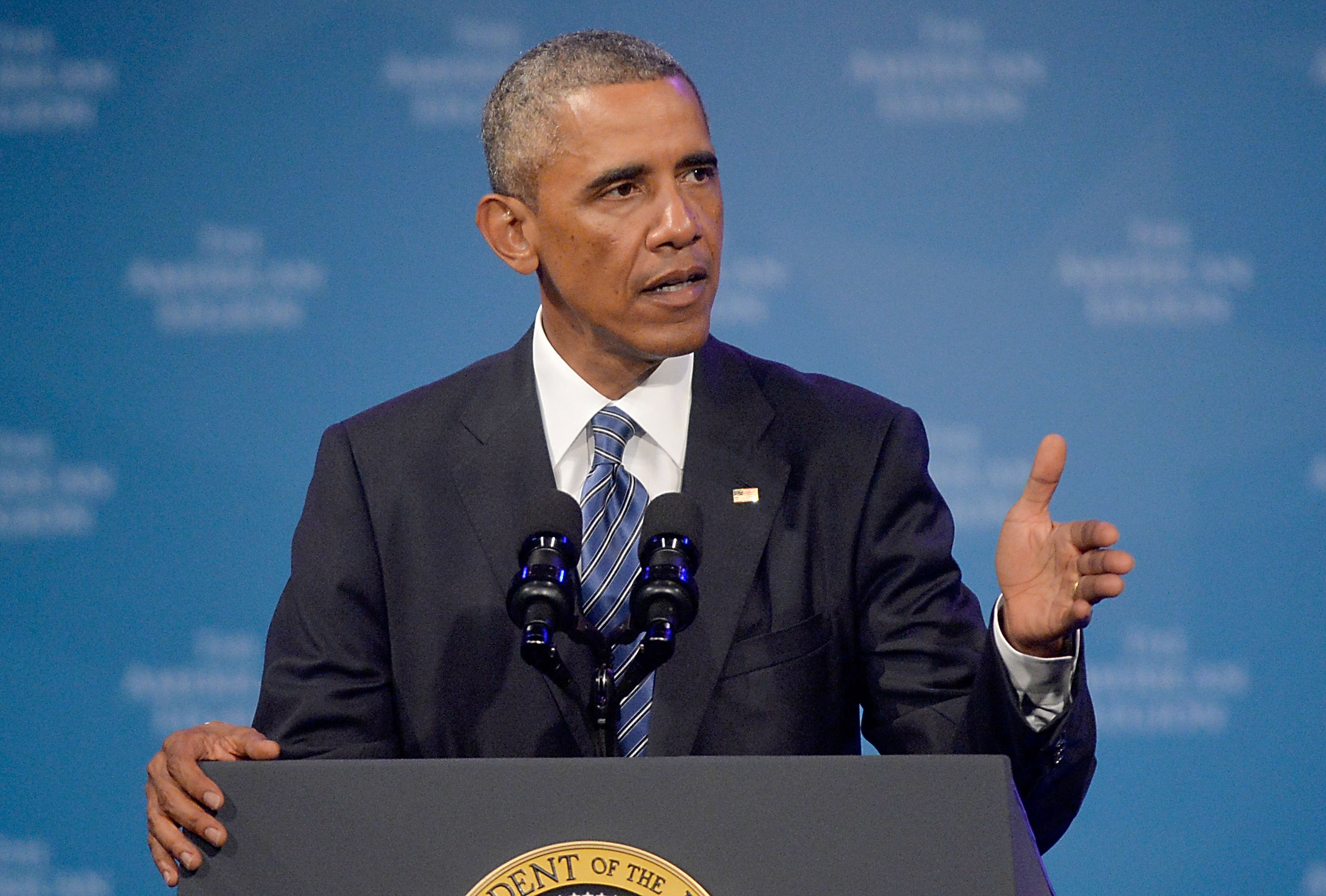 President Obama cautioned Tuesday that American power must be used wisely but defended the recent American intervention in Iraq and promised to root out the threat of the Islamic militant group sweeping across northern Iraq and Syria.

"Keeping America strong and secure means we have to use our power wisely. History teaches us of the dangers of overreaching and spreading ourselves too thin and trying to go at it alone," the president said to an audience of veterans attending the American Legion's annual convention in Charlotte, North Carolina.

He defended his decision to authorize airstrikes against the Islamic State of Iraq and Syria (ISIS) in Iraq and - referencing their execution of American journalist James Foley last week - promised to remain vigilant in destroying the group.

"Rooting out a cancer like [ISIS] wont be easy and it won't be quick but tyrants and murderers before them should recognize that kind of hateful vision ultimately is no match for the strength and hopes of people who stand together, the security and dignity and freedom that is the birthright of every human being.

Mr. Obama addressed the convention in the wake of widespread reports of poor care and backlogs at the Veterans Affairs (VA) hospitals across the country and pledged to enact a series of reforms that will improve mental health care for former service members.The president unveiled 19 new executive actions aimed at improving the quality and access to mental health services throughout the VA. The actions include automatically enrolling departing service members who are receiving treatment for mental health conditions in a program to continue care after they discharged, expanding mental health peer support and spending millions to study suicide prevention and conditions like post traumatic stress disorder (PTSD).

"We are very clear eyed about the problems that are still there. And those problems require us to regain the trust of our veterans and live up to our vision of a VA that is more effective and more efficient and that truly puts veterans first. And I will not be satisfied until that happens," the president said.

The speech comes at a time when the president's approval rating is lagging, especially among veterans and their families. A July Associated Press-GfK poll found that just 33 percent of veterans and veterans' households approved of the job Mr. Obama is doing. Sixty-six percent disapproved.

In spring, news reports suggested that as many as 40 veterans had died while waiting for care at the Phoenix VA hospital, which was using secret wait lists to mask the true delays in providing care. Those revelations led to scores of other access problems across the country coming to light. Former VA Secretary Eric Shinseki ultimately resigned amid an uproar.

However, a draft report from an investigation being conducted by the VA's Office of Inspector General concluded that there was no conclusive evidence that tied veterans' deaths to delay in care.

According to the Associated Press, VA Secretary Robert A. McDonald wrote in a memo about the report, "It is important to note that while OIG's case reviews in the report document substantial delays in care, and quality-of-care concerns, OIG was unable to conclusively assert that the absence of timely quality care caused the death of these veterans."

McDonald, the former chief executive at Procter & Gamble, was nominated by the president to take over the agency after Shinseki resigned and was confirmed at the end of July. He is also expected to address veterans at the American Legion convention.

In May, investigators found that 1,700 veterans who were awaiting primary care appointments at the Phoenix hospital were not found on any wait list. The VA has reached out to all of those veterans to schedule care, but 1,800 veterans there will still have to wait at least 90 days to see a doctor.

The scandal prompted Congress to pass a $16.3 billion proposal that allows veterans who are unable to receive timely care in the VA system to seek treatment elsewhere, and provides money for the hiring of more doctors and nurses and new facilities across the country. Mr. Obama signed the bill in early August.

In addition to the distrust from veterans, the president is coming under fire from a fellow Democrat. Sen. Kay Hagan, D-N.C., who is locked in a tough re-election battle, said before the speech Mr. Obama's commitment to veterans is still lacking.

"The Obama Administration has not yet done enough to earn the lasting trust of our veterans and implement real and permanent reforms at the VA," Hagan said in a statement. "I hope to hear the President address these challenges at the American Legion's National Convention in Charlotte. I will be there to discuss some of the steps I want to see taken in Washington to uphold the commitment our government has made to North Carolina's veterans."

In addition to the mental health care improvements, Mr. Obama will be announcing a number of public-private partnerships to benefit veterans. Several banks are partnering with the administration to make it easier for active duty service members to obtain mortgage rate reductions and reduce monthly payments, and the Education Department has instructed federal student loan servicers to identify active-duty service members who might be eligible for a cap on their student loan interest rates.