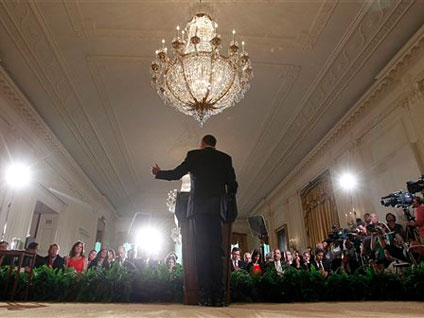 At a press conference today focused largely on the oil leak in the Gulf of Mexico, President Obama explained why he never joined Republican calls to "drill, baby, drill."

"The fact that oil companies now have to go a mile underwater and then drill another three miles below that, in order to hit oil, tells us something about the direction of the oil industry," he said. "Extraction is more expensive and it is going to be inherently more risky."

"And so that's part of the reason you never heard me say drill, baby, drill. Because we can't drill our way out of the problem," he said.

The president said that "the easily accessible oil has already been sucked up out of the ground" - which means that "moving forward, the technology gets more complicated, the oil sources are more remote, and that means that there's probably going to end up being more risk."

"And we as a society are going to have to make some very serious determinations in terms of what risks are we willing to accept," he said.

The president pointed to the Gulf disaster to make the case for the climate and energy bill being considered in Congress.

The bill, he said, comes with this message: "Yes, we're going to still need oil production, but, you know what? We can see what's out there on the horizon and it's -- it's a problem, if we don't start changing how we operate."

"More than anything else, this economic and environmental tragedy -- and it's a tragedy -- underscores the urgent need for this nation to develop clean, renewable sources of energy," said the president. "Doing so will not only reduce threats to our environment, we'll create a new, homegrown American industry that can lead to countless new businesses and new jobs."

Asked if he regrets his call for expanded offshore drilling before the tragedy, the president said, "I continue to believe what I said at that time, which was that domestic oil production is an important part of our overall energy mix. It has to be part of an overall energy strategy."

"I also believe that it is insufficient to meet the needs of our future, which is why I've made huge investments in clean energy, why we continue to promote solar and wind and biodiesel and a whole range of other approaches, why we're putting so much emphasis on energy efficiency," he continued.

"But we're not going to be able to transition to these clean energy strategies right away. I mean, we're still years off and some technological breakthroughs away from being able to operate on purely a clean energy grid," the president told reporters. "During that time we're going to be using oil. And to the extent that we're using oil, it makes sense for us to develop our oil and natural gas resources here in the United States and not simply rely on imports."