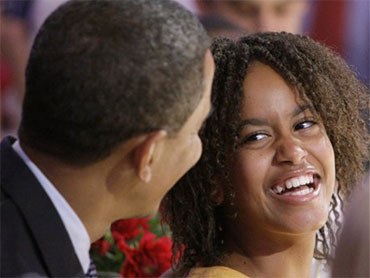 President Obama turned personal at the end of his press conference today, saying his daughter Malia asked for an update this morning on the oil leak in the Gulf.

"You know, when I woke up this morning and I'm shaving, and Malia knocks on my bathroom door and she peeks in her head and she says, 'did you plug the hole yet, Daddy?'" he said.

The president went on to note that he "grew up in Hawaii where the ocean is sacred."

"And when you see birds flying around with oil all over their feathers and turtles dying, you know, that doesn't just speak to the immediate economic consequences of this," he said, "this speaks to, you know, how are we caring for this incredible bounty that we have?"

"And so, you know, sometimes when I hear folks down in Louisiana expressing frustrations, I may not always think that their comments are fair," continued Mr. Obama. "On the other hand, I probably think to myself, you know, these are folks who grew up, you know -- you know, fishing in these wetlands and, you know, seeing this as an integral part of who they are. And to see that messed up in this fashion would be infuriating."

"So the thing that the American people need to understand is that not a day goes by where the federal government is not constantly thinking about how do we make sure that we minimize the damage on this, we close this thing down, we review what happened to make sure that it does not happen again," he said.

The president said a crisis of this magnitude "forces us to do some soul-searching."

"In the meantime, my job is to get this fixed," he said. "And in case anybody wonders, in any of your reporting, in case you were wondering who's responsible, I take responsibility."