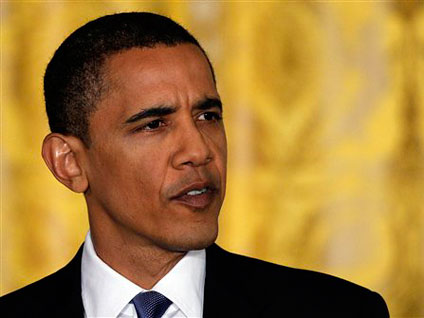 The federal government was not as prepared as it should have been for the unprecedented oil spill in the Gulf of Mexico, President Obama said today, but he asserted that the disaster has been his administration's highest priority since the day the Deepwater Horizon oil rig exploded on April 20.

"The day that the rig collapsed and fell to the bottom of the ocean, I had my team in the Oval Office that first day," Mr. Obama said. "Those who think that we were either slow on our response or lacked urgency don't know the facts. This has been our highest priority since this crisis occurred."

The administration has come under fire for appearing to let oil company BP take the lead in the clean up and containment efforts as millions of gallons of oil pour into the Gulf. The president himself has been criticized for not giving enough attention to the issue; tomorrow will be just his second trip to the affected region since the rig explosion.

Yet he noted that a history of corruption in the Minerals Management Service, the Interior Department agency responsible for overseeing drilling, has yet to be entirely corrected.

Interior Secretary Ken Salazar "came in and started cleaning house, but the culture had not changed in MMS, and absolutely I take responsibility for that," Mr. Obama said.

MMS Director Elizabeth Birnbaum resigned for her post earlier this morning, though Mr. Obama said he was unaware of the circumstances of her departure.

"I found out about her resignation today," he said.

The lack of oversight from the MMS allowed for mistakes, such as an insufficient allocation of boom in the Gulf to prepare for such an accident, Mr. Obama said.

"When it comes to prior to this accident happening, I think there was a lack of anticipating what the worst-case scenarios would be, and that's a problem," he said.

Still, he maintained that "BP is responsible for this disaster."

BP is operating at the federal government's direction, Mr. Obama said, but the oil company must carry out the containment efforts because its technology is superior to the government's. The president said there have been some technical debates about the best path forward. For instance, some have noted that BP has resisted the Environmental Protection Agency's directions with respect to the dispersants used in the clean up efforts.

"Overall, the decisions that have been made have been reflective of the best science that we've got," Mr. Obama said.

"What I'm spending my time thinking about is, how do we solve the problem," he said.

(Watch his response in the video at left.)

"I'm confident people are going to look back and say this adminstration was on top of what was an unprecedented crisis."

The president said the Interior Department has recommended aggressive new operating standards and requirements for offshore drilling. The administration is also ordering the suspension of the planned drilling exploration off the coast of Alaska, as well as the cancellation of lease sales planned in the Western Gulf and off the coast of Virginia. A moratorium on new deepwater oil drilling permits will be continued for six months while a presidential commission investigates the unprecedented accident. The administration is also suspending action on 33 deepwater exploratory drills off the Gulf Coast.

To address the current spill, BP is attempting to plug the leak with densely packed mud in a method called "top kill." The president acknowledged it "offers no guarantee of success." He emphasized, however, that this clean up and containment effort under way is the largest of its kind in U.S. history, with about 20,000 people in the region working on it, including about 1,400 from the National Coast Guard.

"We are relying on every resource and every idea, every expert and every bit of technology to work to stop it," Mr. Obama said. "We will take ideas from anywhere, but we are going to stop it."

The president said that containing the spill quickly and efficiently is in BP's best interest but acknowledged that the oil company was not initially forthcoming about the extent of the disaster. The initial estimates of how much oil is spilling into the Gulf were too low, and both the government and BP are to blame for those estimates, the president said. He added, however, that the response would have been the same had the initial estimates been more accurate.

"At the start, we understood this could be really bad," he said.

If the U.S. is to continue domestic oil production, Mr. Obama said, the federal agency in charge of overseeing it must be operating at the highest level.

"We have to have confidence that, even if [such an accident] is just a one-in-a-million shot, that we've got enough technology know-how, that we can shut something like this down... in two or three or four days," he said. "And I don't have that confidence right now."

He maintained, however, that "producing oil here in America is an essential part of our overall strategy."

Alternative, clean and renewable energy sources cannot currently meed the nation's energy needs, the president said -- but the crisis should "serve as a wake up call" for the need to develop those industries. The fact that oil companies now have to go a mile off shore and then three miles underground to drill reveals that domestic oil production is "expensive and going to be inherently more risky," Mr. Obama said.

"That's part of the reason you never hear me say, 'Drill, baby, drill,'" the president said, referring to the pro-drilling mantra adopted by Republicans.

"We should be pretty modest in understanding that the easily accessible oil has already been sucked up out of the ground," he said. "We can't drill our way out of the problem."

More from the Obama press conference: