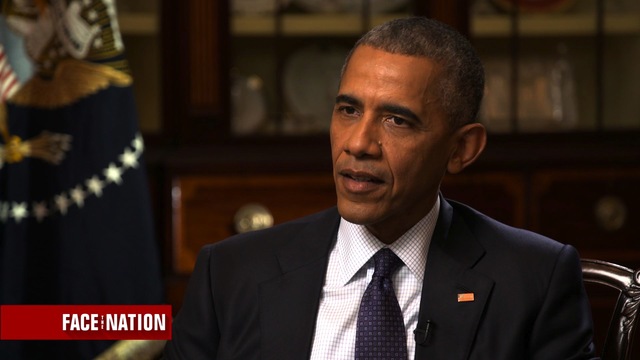 With the Democratic convention opening Monday in Philadelphia to formally nominate Hillary Clinton, President Obama said in an interview this weekend that he's "clear-eyed" about her strengths and weaknesses--but that there is no candidate in modern history who has been "more prepared" than her to be president.

"You know, we don't go vacationing together. I think that I've got a pretty clear-eyed sense of both her strengths and her weaknesses," he told CBS' John Dickerson in a wide-ranging interview for "Face the Nation" Friday. "And what I would say would be that this is somebody who knows as much about domestic and foreign policy as anybody, is tough as nails, is motivated by what's best for America and ordinary people, understands that in this democracy that we have -- things don't always happen as fast as we'd like. And it requires compromise and grinding it out."

"She's not always flashy. And there are better speech makers," Mr. Obama added. "But she knows her stuff. And more than anything, that is what is ultimately required to do a good job in this--in this office."

He said her decision to use a private email server was a "mistake," but that anyone who's been in public life as long as Clinton has is sure to have made a few mistakes over the years--and that "on the big stuff, she's gotten it right."

"If you've been in the public eye for decades at the highest levels of scrutiny, folks are going to find some mistakes you make," he said. "I've made mistakes. I don't know any president or public official at her level who aren't going to look back and say, 'I should have done something like that differently.'"

"But what I would also say is that the consistency with which she has devoted her life to trying to make sure that kids get healthcare and a good education, and that, you know, families are getting a fair break if they're working hard, and that America upholds its best traditions of foreign policy-- on the big stuff, she's gotten it right," he added.

Mr. Obama named four qualities he thinks the country should be looking for in its next president: they should be a team builder, have a sense of "discipline," have a "vision" for the country, and truly care about the American people.

"You have to really care about the American people," he said. "Not in -- not in the abstract. Not as boilerplate. But you have to really every single day want to do your best for them. Because if you don't have that sense grounding you, you will be buffeted and blown back and forth by polls, and interest groups, and voices whispering in your heads."

Meanwhile, on the Republican side, Mr. Obama said the fact that someone like Trump--who, four years ago, was openly questioning whether Mr. Obama was born in the United States--can win the Republican nomination is a sign the party is undergoing a major shift.

"I think it says something about what's happened to the Republican Party over the course of the last 8, 10, 15 years," he said. "If you think about what a Bob Dole, or a Jim Baker, or a Howard Baker, or a Dick Lugar, or a Colin Powell stood for, yeah, they were conservative. They were concerned about limited government, and balancing budgets, and making sure we had a strong defense. But they also understood that our system of government requires compromise, that Democrats weren't the enemy, that the way our government works requires us to listen to each other."

He cautioned against playing on the fears of the American people after recent terror attacks in the U.S. and abroad, saying the country is still "significantly" safer now than it was right after 9/11. And as for the dark worldview Trump presented in his speech at the Republican convention in Cleveland last week, Mr. Obama said it isn't representative of what's happening in the country.

"As serious as these terrorist attacks are, the fact of the matter is that the American people are significantly more safe now than they were before all the work that we've done since 9/11," he said. "And so maintaining that perspective I think is absolutely critical. And trying to fan fears simply to score political points I think is not in the best interest of the American people."

Mr. Obama also weighed in on Trump's suggestion that the U.S. could and should withhold military support from NATO countries that have not pulled their weight, saying those comments show a "lack of preparedness that he has been displaying when it comes to foreign policy."

"Anybody who's been paying attention knows there is a big difference between challenging our European allies to keep up their defense spending, particularly at a time when Russia's been more aggressive, and saying to them, 'You know what? We might not abide by the central tenant of the most important alliance in the history of the world,'" he said.

As for his decision not to use the term "radical Islam"--for which Trump and other Republicans have been highly critical--Mr. Obama said it could discourage Muslim allies if they think the U.S. is willing to lump them in with terror groups like ISIS.

"The fact of the matter is that I've never been politically, or particularly concerned with the phrase," he said. "What I've been more concerned about is how do we stop violent extremists from killing us."

"The reason that I haven't used the particular phrase "radical Islam" on a regular basis is because in talking to Muslim allies, in talking to the Muslim American community here, that was being heard as if we were ascribing to crazy groups like I.S.I.L. or Al Qaeda, the mantle of Islam," he added, using an alternative acronym for ISIS.

As he contemplates his last year in office, Mr. Obama said he feels like he and his team have hit their stride.

"I feel as if I'm a better president than I've ever been," he said. "That the experience has made me sharper, clearer, about how to get stuff done. My team is operating at a peak level. And we're really proud of what we're going to do, and we're going to run through the tape. But I also think that It's really important for self-governance and democracy that we go through this process and I'm able to turn over the keys.

Mr. Obama also recalled two pieces of useful advice about the presidency he got from his predecessor, George W. Bush.

"The first piece of advice was, 'Trust yourself. And know that ultimately regardless of the day-to-day news cycles and the noise that the American people need their president to succeed, regardless of political party,'" he said. "Which I thought was very generous of him."

The second one, Mr. Obama said, was a bit more practical: "Always use Purell hand sanitizer. Because if you don't, you're going to get a lot of colds because you shake a lot hands."